Dedicated Servers Will Come At A Price For Black Ops 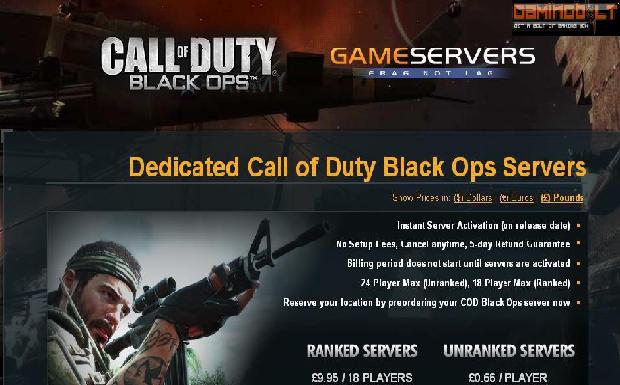 Activision have just announced that they will be having dedicated servers for their upcoming Treyarch developed Cold War based First Person Shooter, Call of Duty: Black Ops, but guess what- you will have to pay for them, and they will only be there for the PC version of the game. Ding dong.

The developers have collaborated with GameServers.com to provide PC gamers of Black Ops with dedicated servers.

“We are extremely excited about this unprecedented relationship with Activision to offer dedicated servers exclusively for Black Ops,” David Aninowsky, CEO of GameServers said. “We are placing a great amount of pressure on ourselves to ensure that we exceed any and all expectations.”

GameServers is taking pre-orders, and the 18-player ranked servers are priced at £9.99 a month and the unranked servers are available for £0.66, per player. Their site, right here, promises the players will be given “instant server action,” and that too “on release day.” Not only that. Here is what the site says:

In an interview with IGN, Treyarch’s Josh Olin said, “If you rent a server, you will still have the ability to Kick, Ban, and Configure it the way you see fit.

“Of course Ranked servers will have some set configurations that can’t be messed with; but you will still have the power to administrate your servers as a customer of GameServers.”