There is absolutely no shortage of survival games on the marketplace today. Indeed, the last decade has been a veritable explosion of those kinds of titles, as the success of Minecraft especially has launched a thousand clones all striving to be the next big thing. It’s a crowded marketplace, which makes it hard for games, even good games, to stand out – why bother when you already have whatever you are familiar with? What makes your game stand out?

Deep Rock Galactic’s answer to that is simple – it creates a potent mix of survival games and co-op shooters. It actually reminds me a little bit of Fortnite – no, not the battle royale mode that’s become bigger than most social networks in the world, but the original Fortnite, which tried to mix co-op action, survival, and crafting in a single game too.

But the similarities are conceptual and only superficial. Deep Rock Galactic is very much its own thing, and it is very unique in how oddly compelling and thrilling it manages to become. A lot of this probably comes down to the core structure of the game, which creates a Monster Hunter style gameplay loop that is self perpetuating, promising relatively compact gameplay experiences and playing on your desire to one up yourself, together making it so you want to keep playing. You are assigned missions to go to the sub-terranean caverns of the planet Hoxxes, where you will mine and gather resources on behalf of the eponymous mining corporation, whose employ you are in.

Deep Rock Galactic has a lot of fun with this premise, and it is here that the similarities to Fallout are most evident, with biting and cutting satire of just how soulless profit-driven corporations can become under capitalism, as well as a whole lot of playing into stereotypes surrounding dwarves (whom you play as one of). While the setup and exposition in the game is mercifully kept to a minimum (it’s almost like DOOM 2016 in terms of how quickly it gets you going, with little in the way of preamble), there’s still enough clever writing and dialog to add flavor and some levity to proceedings.

"Your sole lighting is either the narrow beam your helmet can emanate, or the luminous subterranean crystals and plant life that occasionally scatters these caves. You can also throw flares, but these are limited – they go out after a while, and you are limited in how many you can throw in succession, and must wait for them to recharge if you end up using all of them at once. So you’re always in oppressive darkness, pressing down on you, creating a sense of panic not just at the prospect of getting lost."

That levity is necessary, because Deep Rock Galactic can get dark and claustrophobic – and not in a grimdark, mature, “I’m so edgy” way, but in a more organic way that is a natural product of the game’s premise and loop. Playing underground, you are always in the dark – your sole lighting is either the narrow beam your helmet can emanate, or the luminous subterranean crystals and plant life that occasionally scatters these caves. You can also throw flares, but these are limited – they go out after a while, and you are limited in how many you can throw in succession, and must wait for them to recharge if you end up using all of them at once. So you’re always in oppressive darkness, pressing down on you, creating a sense of panic not just at the prospect of getting lost – because these caves are pretty homogenous, and you can barely see a thing as is, what if you just end up going around in circles? – but also that you’re going to be attacked by something in the dark before you get the chance to see what it is.

There is almost a survival horror style exhilaration to combat in Deep Rock Galactic, because you have to manage your health, your ammunition, and the lighting of your surroundings to be able to properly have a handle on any encounter. A lot of the times, you’ll be making the trade off to keep yourself in the dark and hunched against the wall, and shoot only when something enters your narrow line of sight. Other times, you’ll throw your flares to light up the caverns, and go on the offensive, mowing down your delightfully grotesque, bug like enemies.

Those enemies can be as basic as slugs just skulking around, waiting to be shot, to giant, armored boss monstrosities, with very specific strategies necessary to take them on effectively. This delightful variation in enemy design, combined with the tense and thrilling survival-horror style resource management the game adds to the mix (seriously, light is basically a consumable resource in this game, that is a stroke of pure genius) ends up making combat encounters really satisfying, leaving you with a rush of exhilaration once you have emerged victorious, and the adrenaline has subsided.

It further adds to that tense thrill with frequent waves of enemies you need to take on, as well as a mad dash back to your spaceship once you have completed your objective, and the timer steadily counts down to your spaceship and your loot possibly leaving without you. At that moment, all your careful, slow navigation deeper into the caves can be overwhelmed by the sense of panic as you try to find your way back in the dark, barely able to recognize where you are from the brief glimpses in flare flashes that you get at landmarks as you dash past them. And once you’re back from your mission, you can use the resources you gathered to upgrade your gear – creating an almost Monster Hunter style loot driven experience that further makes you want to keep at it. 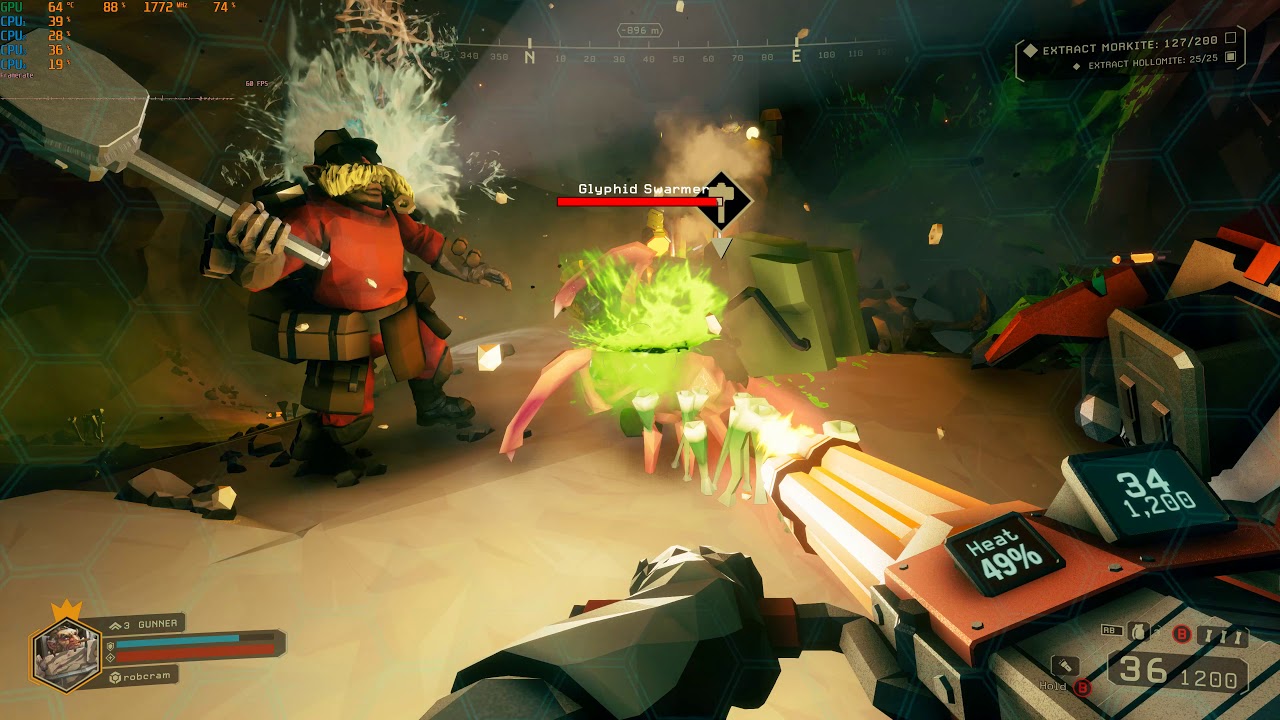 "Once you’re back from your mission, you can use the resources you gathered to upgrade your gear – creating an almost Monster Hunter style loot driven experience that further makes you want to keep at it."

It’s a really potent formula – completing one mission only makes you want to go back and do more, and the missions themselves are presented as compact, with immediate objectives, which doesn’t make them feel like huge time commitments either. It helps that the game is such a great co-op title too – you can band together with up to three other pals, and go resource-gathering and insect-hunting together in the deep caverns. Deep Rock Galactic’s unique chaotic gameplay can be riotous fun with friends – with the caveat being that things become far too easy and quick when you are working with someone else.

The most impressive thing about Deep Rock Galactic is how much it packs in to try and keep you engaged and invested in the long run. Apart from the central self perpetuating gameplay loop, you have different mission types, taking place across different subterranean biomes (though visual variety within a given cavern can be minimal, which can make navigating them extremely difficult; the poor in-game map does not help here either). The missions on offer themselves refresh every so often, while you are also given option to upgrade new abilities for your drone that accompanies you on solo trips, as well as trying out different classes, each with their own unique ability, unlocking special perks and buffs for yourself, and so much more.

It’s also surprising how polished it feels. The game is now out of a long early access period, which means it’s had a long time to iron out any kinks and issues, but that’s true for a lot of games that still launch feeling half-baked and janky so many times. Deep Rock Galactic is extremely polished, however, from its UI, to its visuals, to the excellent music, and the great voice acting. There are occasional performance issues as the game stutters when a whole lot is going on at once, and the online connectivity can completely go on the fritz sometimes. But those are few and far in between, and very much the exception rather than the norm.

Deep Rock Galactic is surprisingly compelling and thrilling, and goes far beyond its obvious inspirations to become more than the sum of its parts. There are issues that can definitely detract from your experience somewhat, but on the whole, the good times you have with these dwarves and the comically evil corporation that they work for will far, far outnumber whatever few frustrations with the game you may sometimes have.

Final Verdict:
GREAT
Extremely thrilling and addictive, surprisingly polished, and packed with content, Deep Rock Galactic is a delicious treat, and a great riff on some well trodden gameplay concepts.
A copy of this game was provided by Developer/Publisher/Distributor/PR Agency for review purposes. Click here to know more about our Reviews Policy.