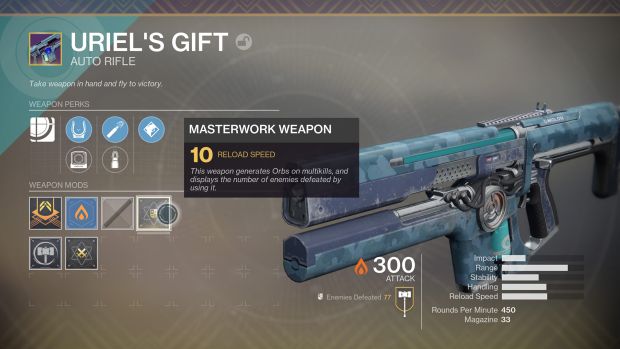 Bungie’s Destiny 2 has been involved in one controversy after another since launch but one of the better additions its seen is Masterworks. This new weapon tier adds slight improvements to range, handling, magazine capacity and reload speed of weapons with multi-kills awards Orbs of Light. Supers have thus become frequent in PvE activities.

However, the rate at which Masterworks drop has been rather sporadic. To address this, Bungie announced that it’s working to implement a “a new mechanism that we can use to limit long dry spells in Masterwork drops due to bad RNG.” This means that if you haven’t had a Masterwork drop in a set amount of time, then you’re guaranteed a drop at some point.

Other factors like costs for Masterworks will also be examined along with Masterworks armour (though their bonuses won’t be as significant). Expect all these changes to arrive sometime in early 2018 especially as Bungie takes off for the Holidays. In the meantime, it’s not a bad idea to play Larian Studios’ Divinity: Original Sin 2. Check out our review for the same here.