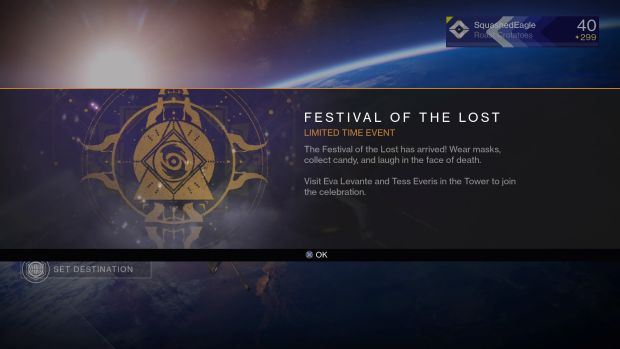 In the midst of Wrath of the Machine’s Heroic mode being released (and beaten in suitably quick fashion) for Bungie’s Destiny: Rise of Iron, new information has been unearthed regarding the Festival of the Lost. This is the Halloween-themed event that’s expected to return sometime this month. It sees players donning masks and completing quests for Halloween rewards. Of course, it also means new dances, emotes, consumables and even ornaments.

Ishtar Collective managed to unearth a number of these including masks for SIVA, Saladin, a SIVA-infested Iron Lord and Firewolf. Some of the quests have been detailed including the completion of Patrols and Public Events while wearing a mask.

Older masks from last year’s event will have also been updated in the process. For ornaments, thus far we know of Bad Juju receiving some new cosmetics. We’ll see if this extends to other Exotics (Thorn and Red Death also appear to be in the running).

What are your thoughts on Festival of the Lost and will you be taking part? Let us know in the comments below.

Tagged With: activision, Bungie, Destiny, Festival of the Lost, ps4, Rise of Iron, Xbox One