Destiny Ghost Edition Sells For More Than $1000 On eBay

You will spend a lot of money on this game, it's your Destiny. 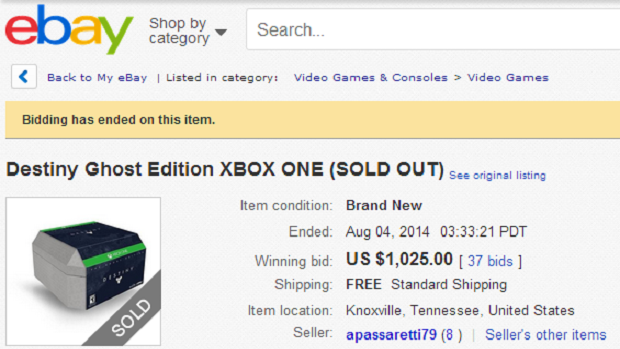 It’s not uncommon for gamers to go to extreme lengths to get the games they desire, but when the game comes in a limited edition format in a truly limited quantity, then things can get a bit crazy.

Some gamers have paid in excess of $1000 to be on of the few to get their hands on this increasingly rare special edition of Destiny, which has exceeded pre-order expectations to such a degree that many of the pre-orders are being cancelled by retailers and swapped out for a version of the game that is more readily available.

Pricing has started (on average) at around 3 times the retail price of the game and doesn’t show any sign of dropping as demand increasses and supply decreases.

One NeoGaf user posted an image online showing that their friend had sold a copy of Destiny Ghost Edition for a huge $1,025.

With Destiny being the big game of the moment, gamers are going wild in an attempt to get their hands on the Ghost Edition of the game which contains:

And last, but by no means least, a 1-1 scale Ghost Robot replica which features working lights and dialogue voiced by Peter Dinklage of Game of Thrones fame.

Would you go to such lengths to secure a copy of the Ghost Edition?