Destiny The Taken King: How to Obtain the Exotic Sniper “Black Spindle”

Want a year two version of Black Hammer? Of course you do. 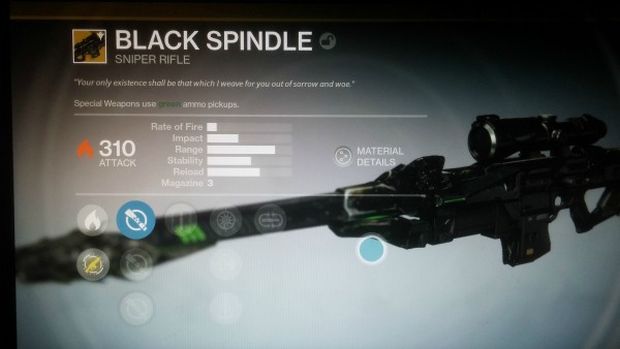 Destiny: The Taken King has been out a week and even after fighting in the Court of Oryx, running through the raid and exploring the story, players are still discovering unique things. One of those is an Exotic sniper rifle Black Spindle which acts as the year two version of Black Hammer. Where can you find it though?

According to a Reddit user (who also posted the below video for further explanation), you’re going to start on the Daily Heroic mission first. Complete the mission as normal, which involves stealing a crystal shard holding Crota’s soul.

It’s not exactly clear how this triggers but when you reach the area where you must find two relics, simply head to the area where the Shadow Thief strike takes place. This is the area where a giant gravity lift will take you to Taniks’s ship. You’ll find an Ultra Taken captain named Driviks which you have to kill in 10 minutes. When that’s done, the Black Spindle.

For more information, check out the video below.