The much sought after Titan chest piece is on sale again. 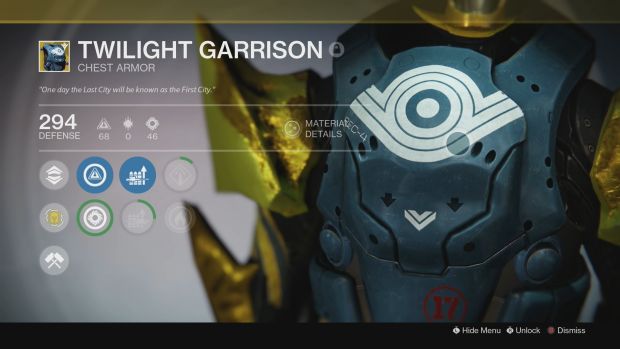 Xur has arrived in the Tower in Bungie’s Destiny, just across from Lord Shaxx, where he will remain until May 15th, 2 AM PST. Much to our surprise, he’s selling Twilight Garrison for the second week in a row.

Twilight Garrison is an Exotic Titan chest piece that allows players to perform aerial dodges. Up to two dodges can be performed in the air and you can dodge forwards and backwards or left and right. Also for sale the Achlyophage Symbiote (Hunter helm) and The Stag (Warlock Helm) – all three items are available for 13 Strange Coins each.

The other unique Exotic item this week is the machine gun Super Good Advice which has a very high chance of returning any missed shots back to your reserves. It costs 23 Strange Coins and while it’s not the machine gun in the game, it’s signature perk makes it very useful in some situations. The Legacy Engram for this week is a Year One helm engram so invest 29 Strange Coins in that if there’s something from Year One you’re missing.