The latest in what is becoming a long line of cool weapons. 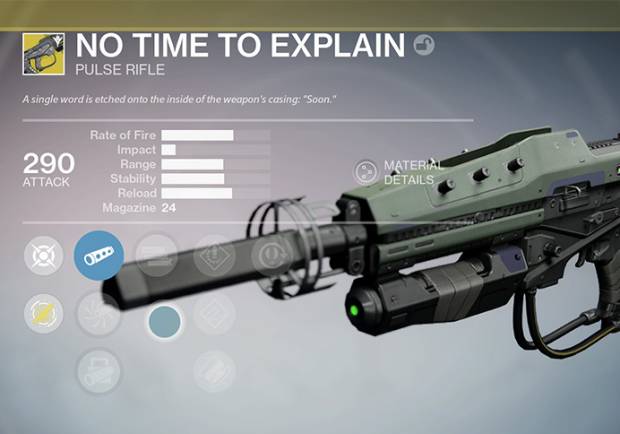 One of the really cool features of Destiny’s The Taken King rollout is that there are a ton of new weapons out there that players all over the world are trying to get their hands on. You’ve probably heard quite a bit about the Sleeper Simulant and if you couldn’t find that particular gun yet, there’s another one you can go after now. The pulse rifle known as No Time To Explain has it’s own quest which went live earlier this week.

In order to get this weapon,  you will have to have played in the Praedyth chain and be invited back to the tower, and, if they currently represent another faction are asked to swear allegiance to the Future War Cult. This particular mission does have a bit of a catch as it requires FWC rep to progress, but only about half a level, easily acquired by spending Motes of Light.

As is the case with most of the exotic weapons in this game, getting this particular piece of equipment is not going to be easy. The mission starts out having to get an item off the taken Minotaur and traveling to a couple of different areas in the galaxy’s map. Even if you have to go through a number of different steps in order to get it, No Time to Explain appears to be worth it. Among the perks this weapon has in store for you is that when you score a precision hit the rounds are returned. Check out the full steps to get the weapon and then see if you can grab one.