Destroy All Humans! 2 – Reprobed – 11 Details You Need To Know

Destroy All Humans returns with another remake- here's what you should know about it.

In 2020, Black Forest Games and THQ Nordic brought back one of the most fondly remembered franchises of the PS2 era with the Destroy All Humans! remake. In light of the solid critical and commercial success that game achieved, there was never any doubt that there would be a follow-up of some kind in the not-too-distant future, and souls enough, we’re not far away from the launch of Destroy All Humans! 2 – Reprobed. Ahead of its launch, then, here, we’ll be taking a look at a few key details that you should know about the game.

As its name suggests, Destroy All Humans! 2 – Reprobed is a remake of the 2006 PS2 and Xbox original, rebuilding the entire experience from the ground-up. Of course, anyone who’s played the 2020 remake will remember how true to the source material it was, and it looks like Reprobed will follow the same script. Earlier this year, GamingBolt interviewed technical director Johan Conradie and assistant creative director Stefan Schmitz, who told us that Reprobed is also going to be quite a faithful remake. “We are developing Destroy All Humans! 2: Reprobed with the same philosophy as our 2020 remake,” they said. “Focusing on keeping the spirit of the original; modernizing the gameplay, mission- and world design; and completely rebuilding the game with modern visuals and tech. Building the entire game from scratch is giving us the possibility to improve features, enemy- and upgrade variety and more.” 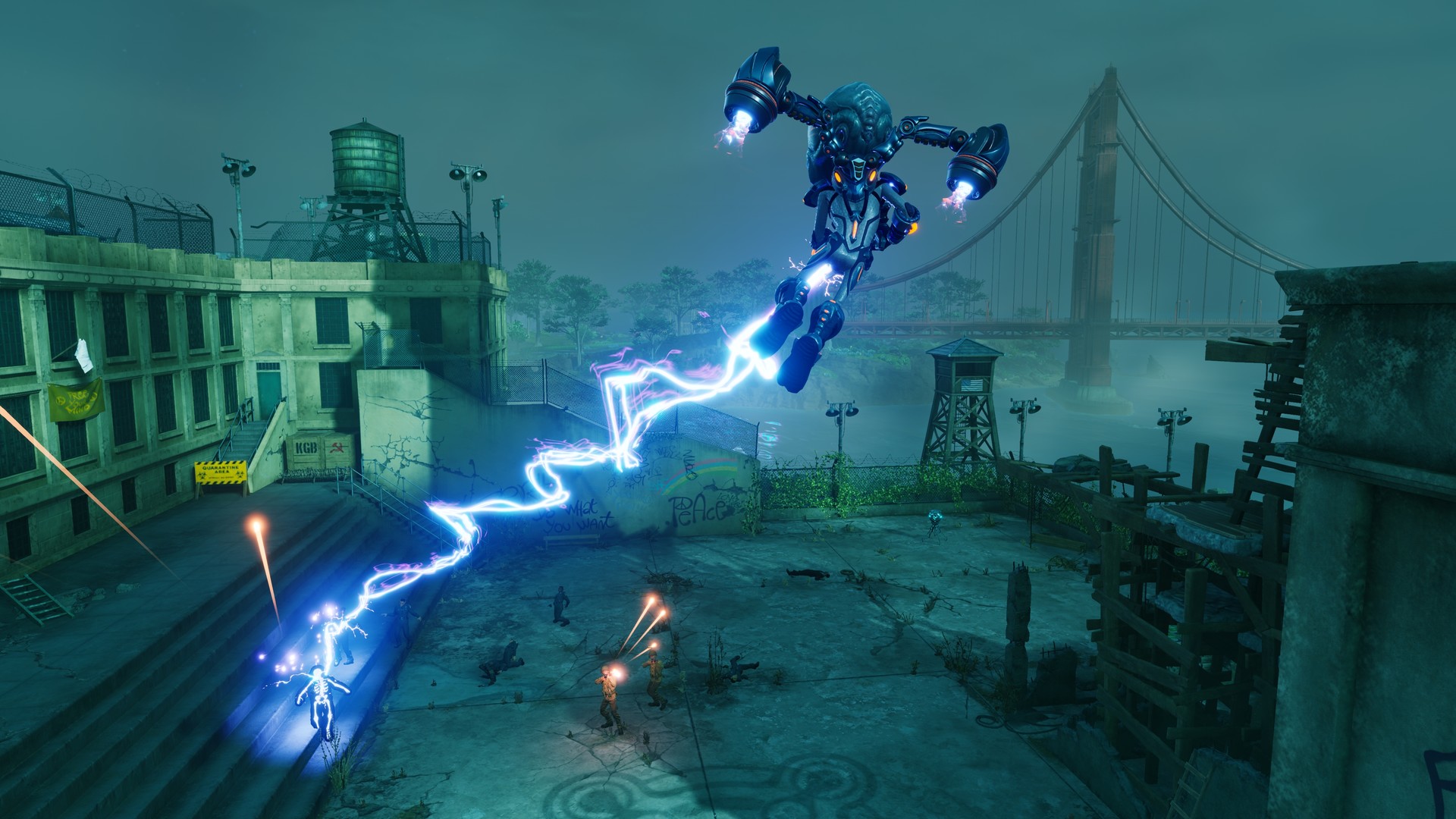 One of the joys of playing a Destroy All Humans! game is being able to wreak havoc in sandbox maps and terrorizing the human population. And of course, a varied array of alien weaponry is one of the ways to do that- so what sort of weapons can we expect in Destroy All Humans! 2 – Reprobed? Well, there’s quite a few. There’s the Meteor Strike, for instance, which does exactly what its name suggests and can cause large-scale destruction, while the Gastro Gun summons Gastro in a drone to aid you during combat. The good old Zap-o-Matic also returns with its electrifying abilities. 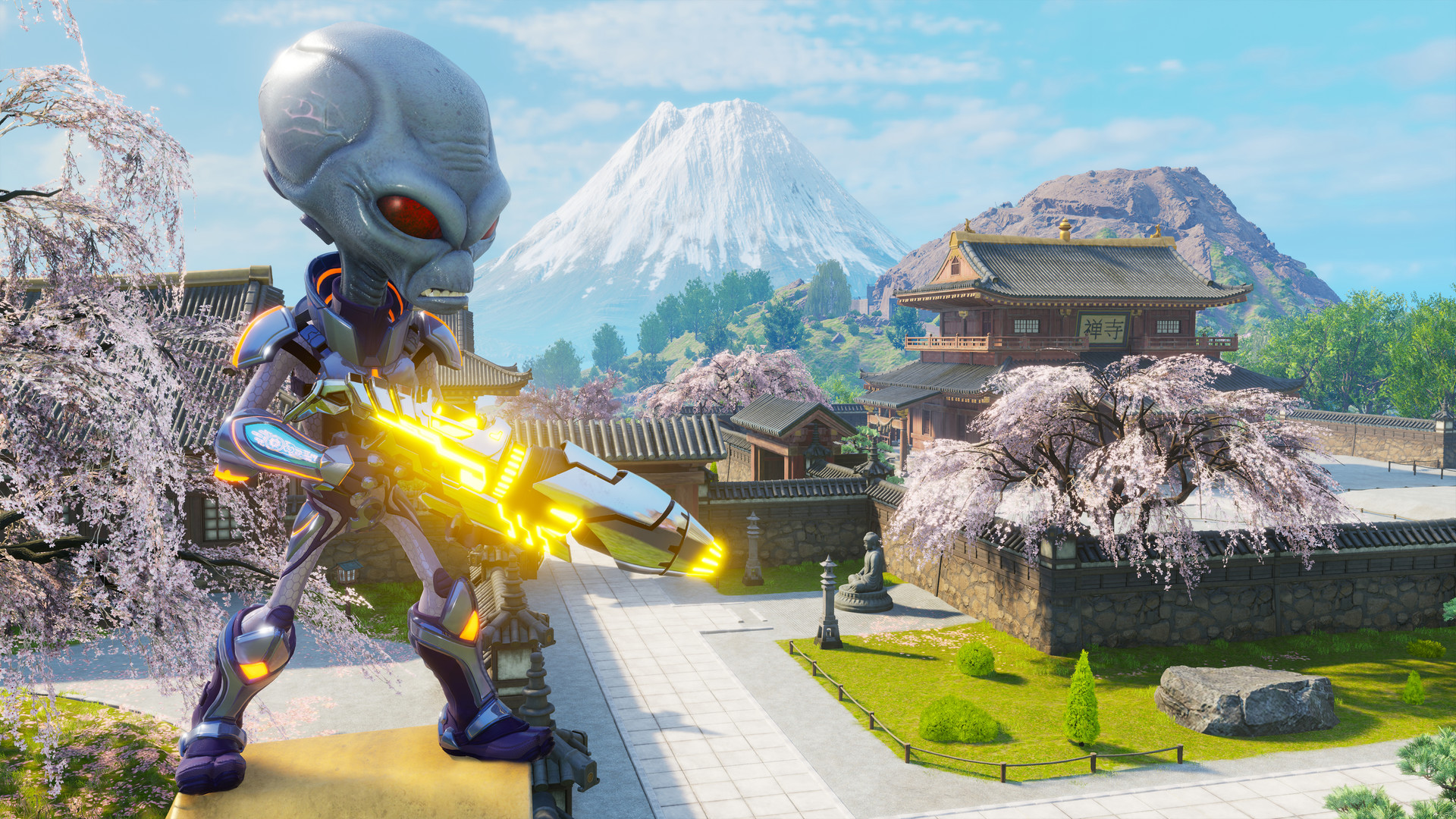 There’s several more weapons in Destroy All Humans! 2 – Reprobed for players to use as well. The Dislocator is a fan-favourite of course, allowing you to fire off energy disks that latch on to targets and then ping-pong them about the environments. The Disintegrator is simpler in concept, but seeing as it fires off shots that’ll burn targets down to the atom, it’ll be pretty nifty nonetheless. The Burrow Beast summons a giant monster from beneath the ground, while the explosive Ion Detonator also returns. One weapon that’ll surely catch the eye is Free Love, a visor that, when equipped, will send anyone you look at into a dancing tizzy. You will, of course, also be able to fly around in and unleash chaos with your flying saucer, which is going to have plenty of weapons of its own as well. 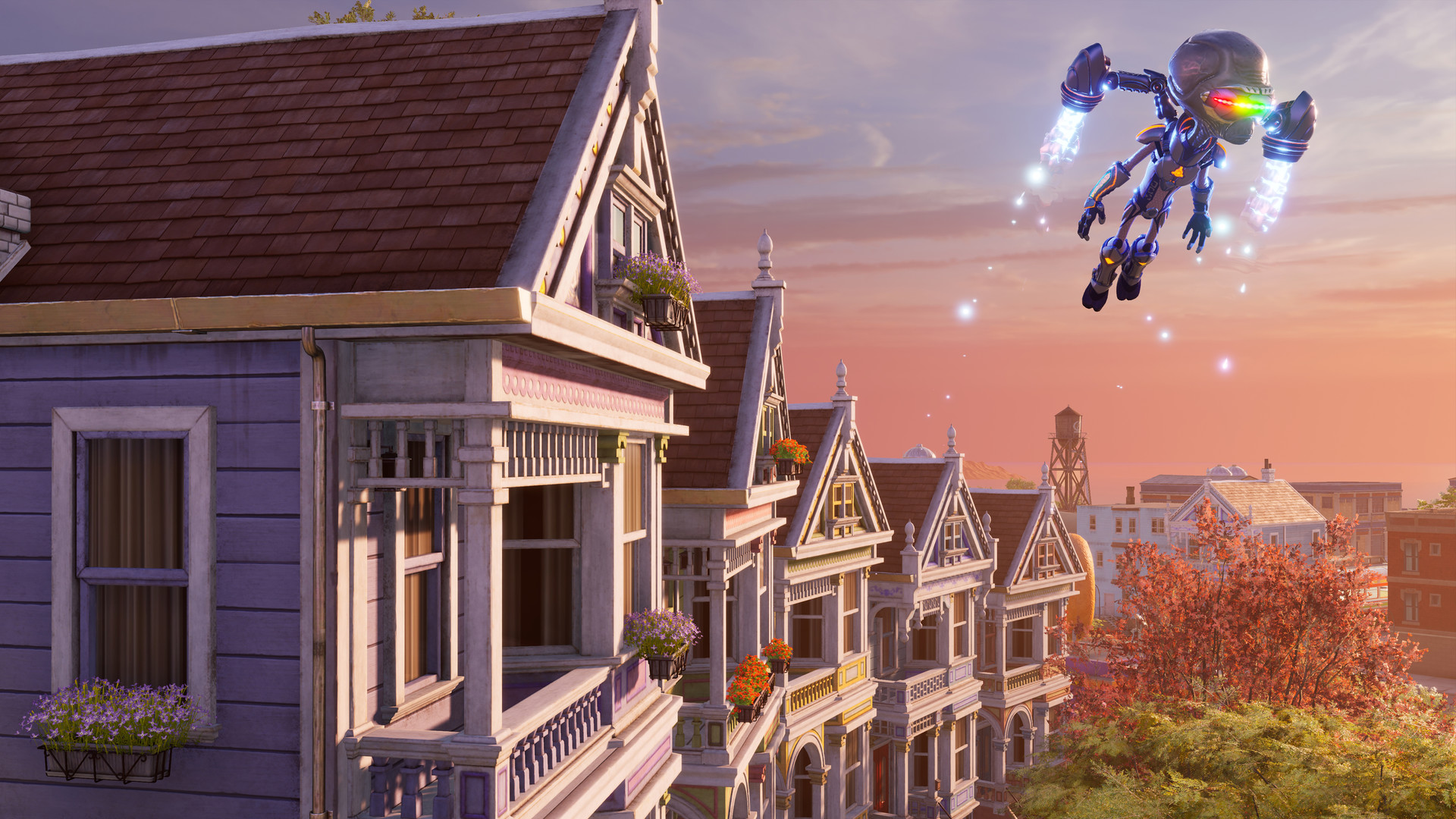 Destroy All Humans! 2’s gene-blender will return, of course, serving as the progression hub for the remake as well- though developer Black Forest Games is making some smart quality-of-life changes here. For instance, rather than a having to look for and abduct single humans that meet certain requirements, Reprobed will instead let players seek out Human Hives, where you can essentially get the type of human you need to abduct in a large group all at once. 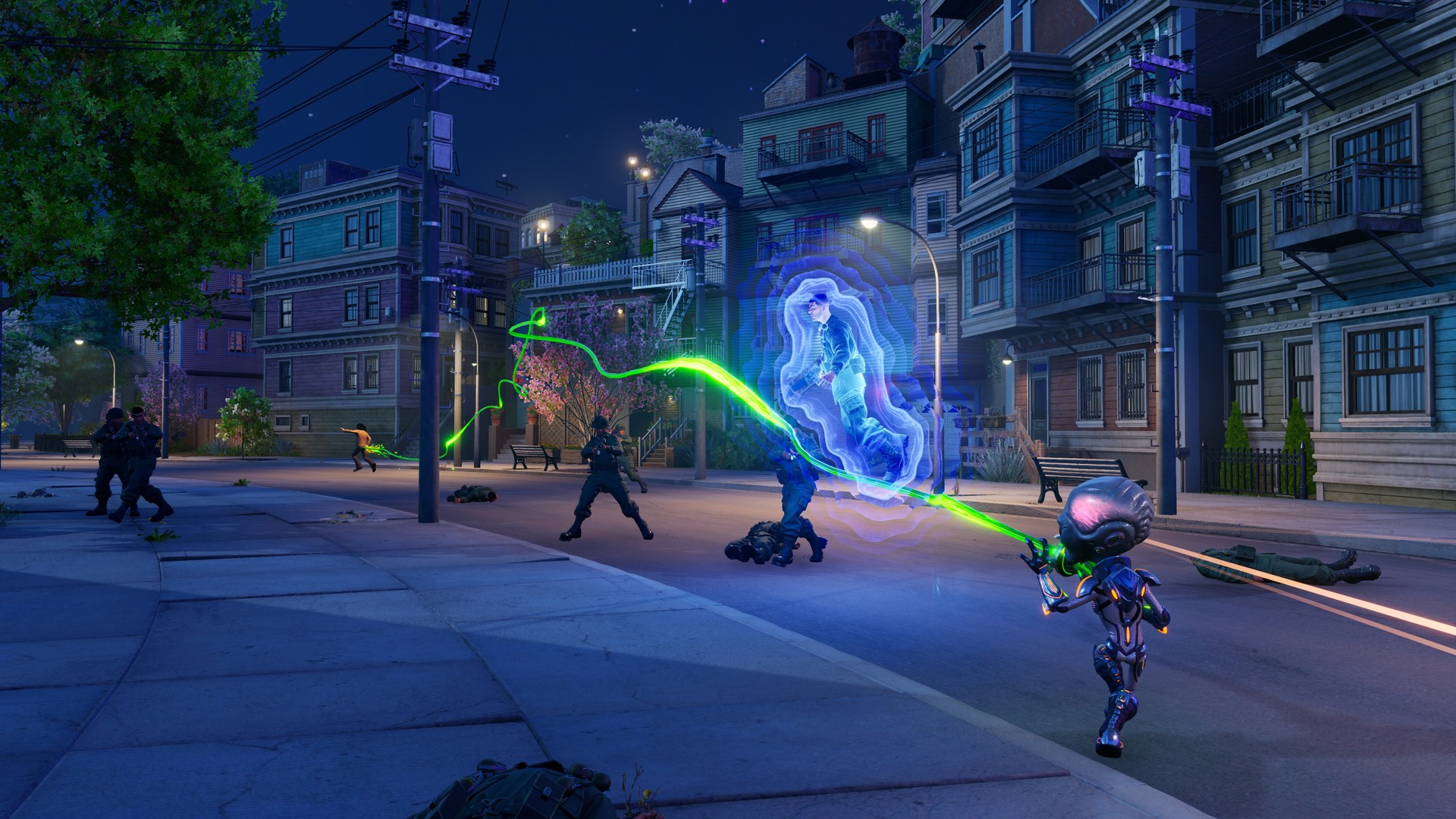 The cloning chamber is an important part of the Destroy All Humans lore, so to speak, and it will, of course, be returning in the upcoming remake to serve similar gameplay purposes. As you might expect, this is another area where Black Forest Games has done some polishing and tweaking. While the developer hasn’t gone into the nitty-gritties here, we do know that Reprobed’s cloning chamber has been overhauled, and will also let players choose from a large selection of skins to equip.

Destroy All Humans 2! – Reprobed is introducing something completely new as well- or, well, almost completely new. PseudoPox the bot has been something of a fringe character who’s appeared on a couple of occasions in the series (including the 2020 remake), but in Reprobed, the bot’s going to have a larger role, and will also serve as a player-guidance system. Meanwhile, Black Forest Games has said that the game will feature better destruction mechanics. 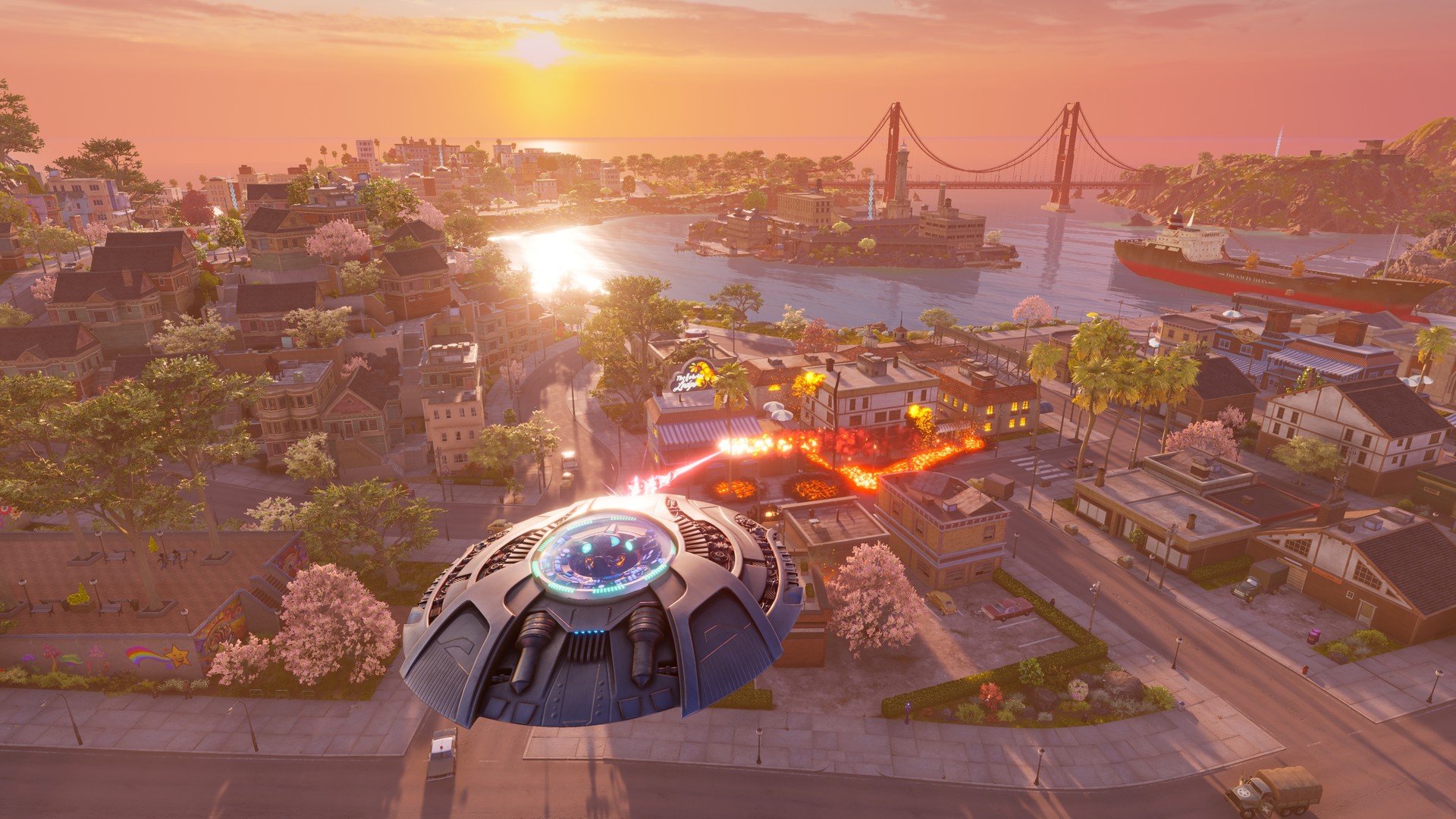 One of the biggest new features introduced in the original Destroy All Humans! 2 back in the day was the ability to play through the game co-op, and unsurprisingly, that’ll be included in the remake as well. Destroy All Humans! 2 – Reprobed will allow two players to play through the full game in local splitscreen co-op, which means twice the mayhem in a game that’s already quite full of mayhem. While the game will run at 60 FPS when you’re playing solo, co-op play will bring the performance down to 30 FPS. 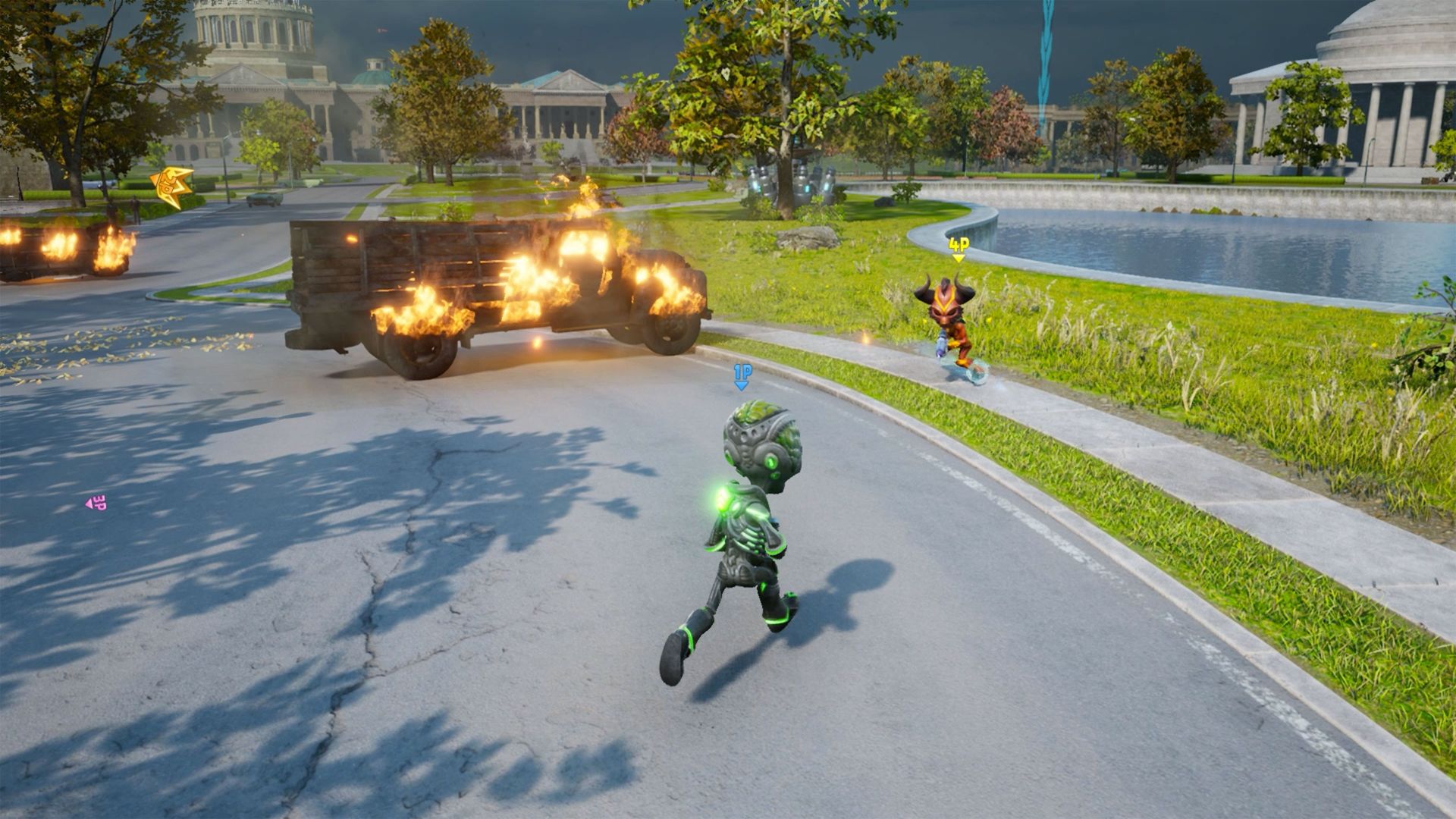 Back in May, Black Forest Games and THQ Nordic released Destroy All Humans! Clone Carnage, a standalone multiplayer spinoff. It is, of course, separately purchasable, but if you don’t want to spend money on it or don’t mind waiting a little longer to play it, it’s been confirmed as a free pre-order bonus for Destroy All Humans! 2 – Reprobed as well. 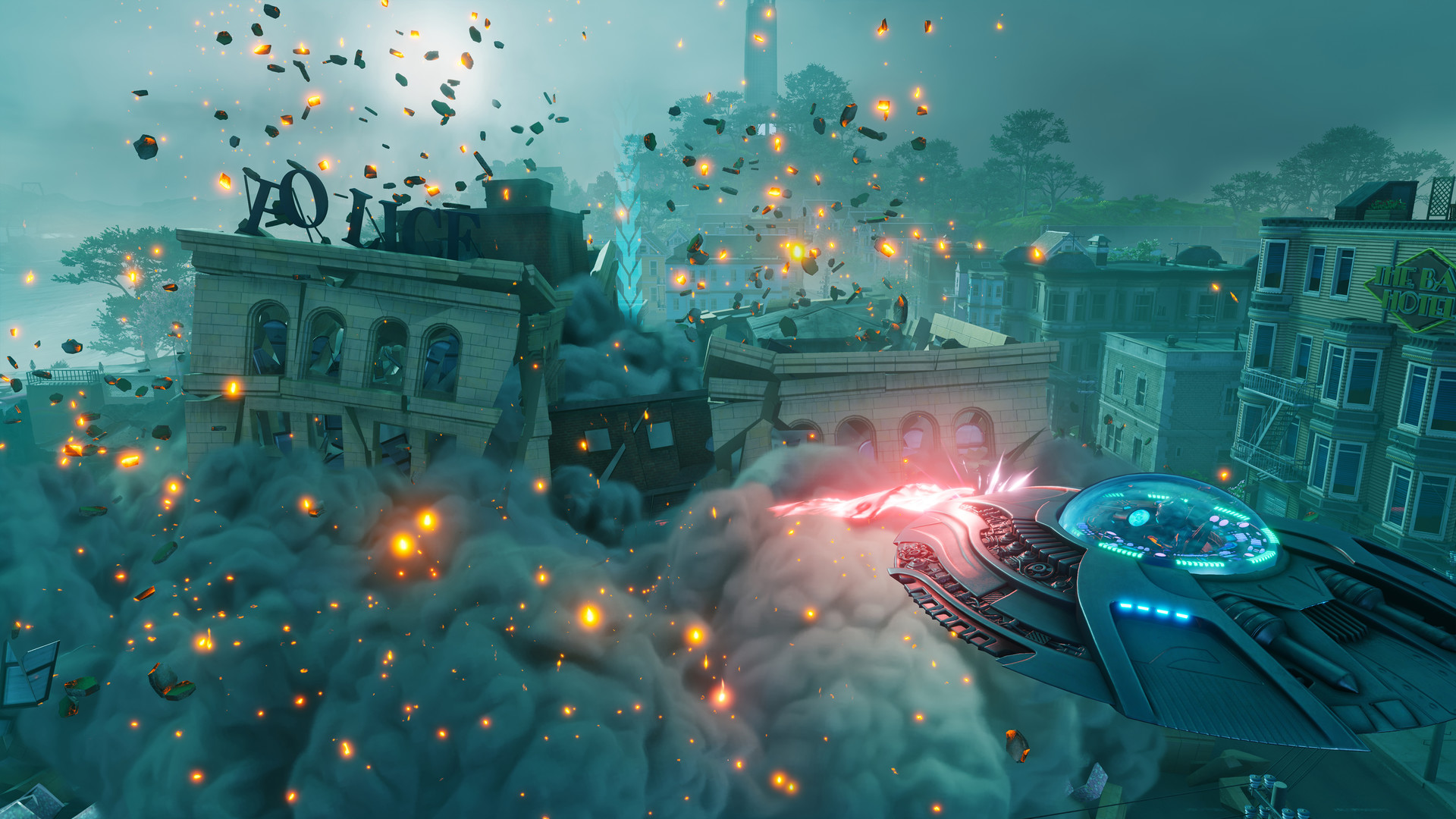 The vast majority of games releasing right now are choosing to be cross-gen, simply because we’re still in that generational transition period where it just doesn’t make business sense to ignore the massive install base of last-gen consoles. Destroy All Humans! 2 – Reprobed, however, is not going to be cross-gen, and is releasing only for PS5, Xbox Series X/S, and PC.

“We also increased active actor and NPC limits drastically from DAH!1’s 20 active limit to 50 high-res NPCs,” the developers told GamingBolt when asked about the same. “This benefits both combat and other gameplay situations, we are aiming to have roughly 2x-3x more ambient NPCs around in the game at any given time, making the world more lively and dynamic, thus prone to more Crypto-unleashed chaos.

“The levels of DAH2 are bigger and more complex than DAH!1. It would have been extremely difficult, if not impossible, to maintain the benchmarks of the visual quality for DAH!2: Reprobed compared to DAH!1 on the old console generation.” 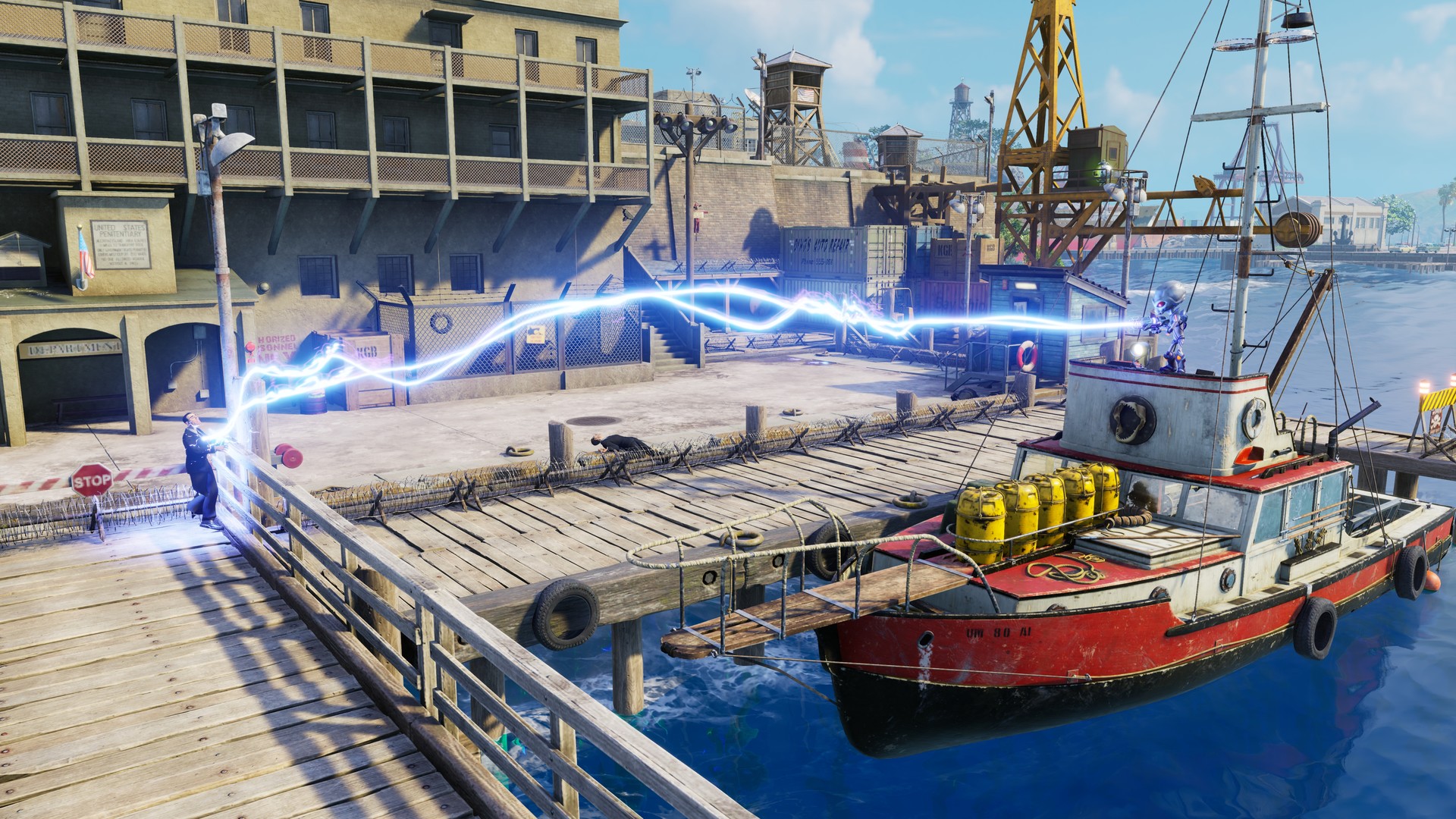 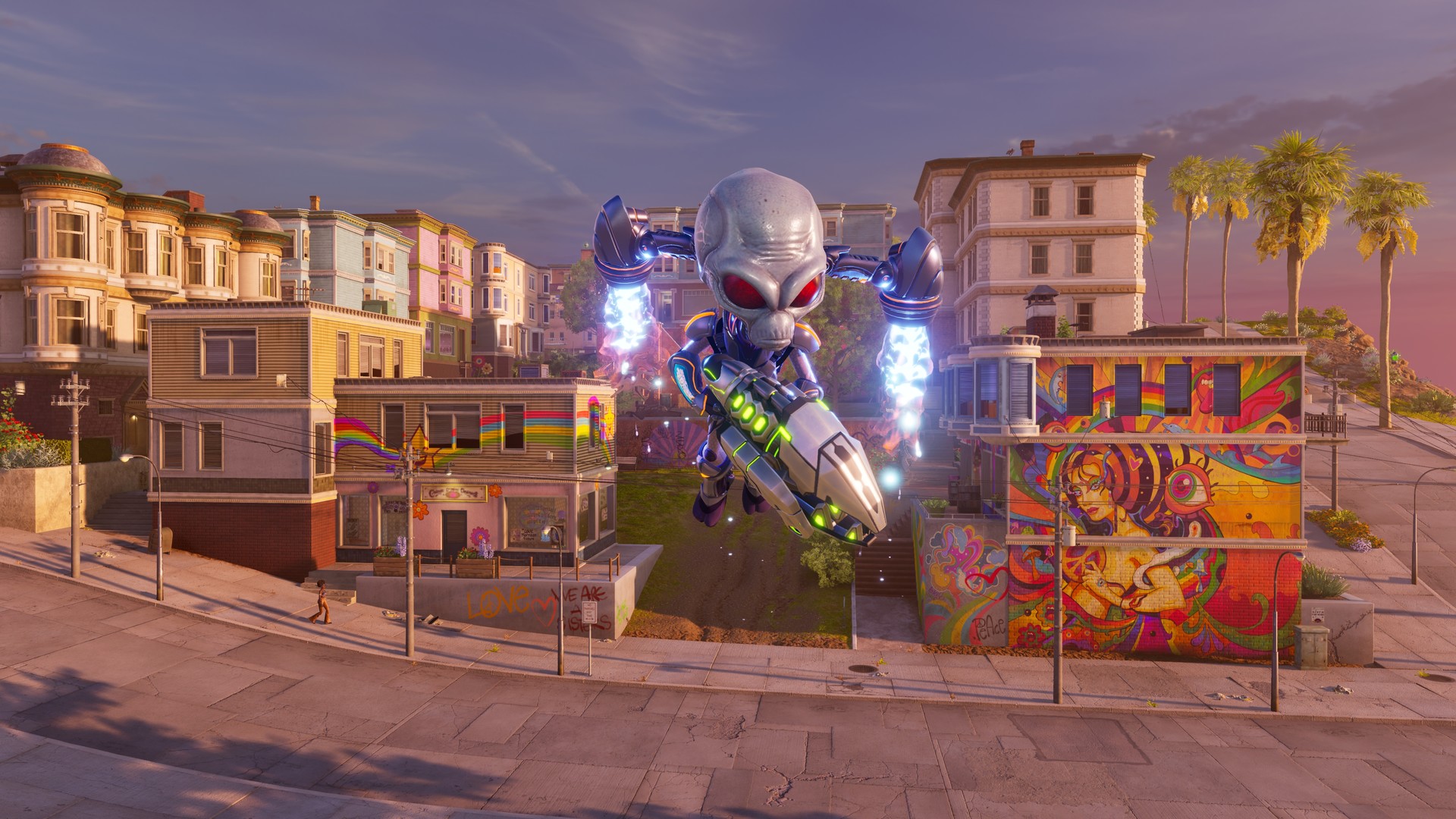 The Steam Deck has quickly caught on in popularity with the lucky few who’ve been able to get their hands on it, and if you’re planning on playing Destroy All Humans! 2 – Reprobed on the device, there’s good news for you- sort of. While we don’t know whether the game will be fully optimized for the Steam Deck at launch, its developers did confirm to GamingBolt that it’ll at least be properly playable. They said: “We’ll definitely be checking the game on the Steam Deck to make sure that we hit an acceptable quality bar there. It’s an exciting piece of technology making our work more accessible to a broader audience in a more accessible way.”