Posted By Shubhankar Parijat | On 02nd, Jun. 2018 Under Graphics Analysis 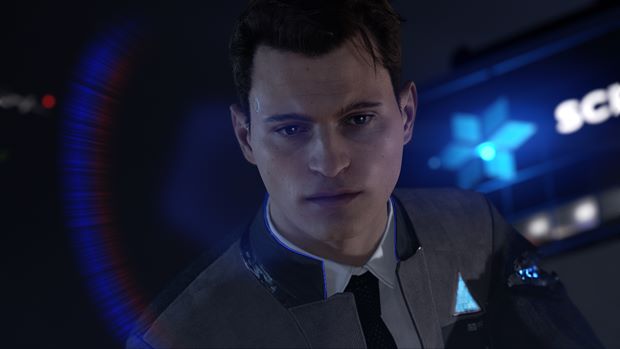 In the last couple of years, Sony’s first parties have been delivering one game after another that pushes the PlayStation 4’s hardware to its absolute limits. The latest game to come out of the Sony pipeline, Quantic Dreams’ Detroit: Become Human is an absolute stunner as far as its visuals are concerned.

From an art style perspective, Detroit is a neo-noir thriller set in the near future, with a look that may not be as exaggerated as what you see in something like Blade Runner, being a little more grounded stylistically, it certainly is reminiscent of it. And that leads to a visual style that is inherently beautiful. The general look and feel of the near-future version of the city of Detroit is at the same time immediately arresting and entirely believable. Beyond the art style, though, there’s a lot to speak of from a technical standpoint as well.

Detroit does indeed feature PS4 Pro enhancements that leverage the system’s added capabilities to an extent, and while the differences on paper imply a significant leap, in effect, the gap between the two versions isn’t all that noticeable. On the base PS4, Detroit is rendered at a resolution of 1080p, and runs at a frame rate of 30 frames-per-second. On the PS4 Pro, the game makes use of checkerboard rendering to output at a resolution of 2160p, while running at the same frame rate as the base version- though it must be said, the frame rate on the Pro is a lot more consistent, with the game dropping below 30 frames occasionally on the base PS4, which we also noted in our review.

While the PS4 Pro version of Detroit does enjoy a boosted resolution, beyond that there really aren’t a great many differences between the two versions of the game, and you can’t really go wrong with either one of them. Because even on a base PS4, Detroit is stunning to behold. Perhaps one of the most impressive things about its visuals has to be its facial models and animations. Facial models have always been one of Quantic Dreams’ strong suites, but they’ve taken it a step above in Detroit: Become Human. The detail here is absolutely incredible, from the pores of their skin and the lines on their faces to even their hair and the way it moves.

Beyond facial models and animations, one of the most impressive aspects of Detroit’s visuals is its lighting. The game makes use of both, global illumination and dynamic lighting, to achieve effects with lighting that look incredibly realistic and unbelievably crisp. Thanks to physically-based rendering, lighting bounces off of surfaces in a believable manner, looking shinier and sharper.

There’s very little in Detroit that you can point to while speaking of imperfections in visuals or from a technical perspective. From its lighting and shadows to its textures and facial animations, the game is crammed full of incredible detail, and looks just beautiful. As far as differences between the PS4 Pro and base PS4 versions go, as we’ve already discussed, the gap is marginal, with the only real difference being in the higher resolution and the fact that frame rate on a Pro is slightly steadier. On either console, Detroit is a marvellous technical achievement, and without a doubt stands tall as one of the best looking games of the current console generation.