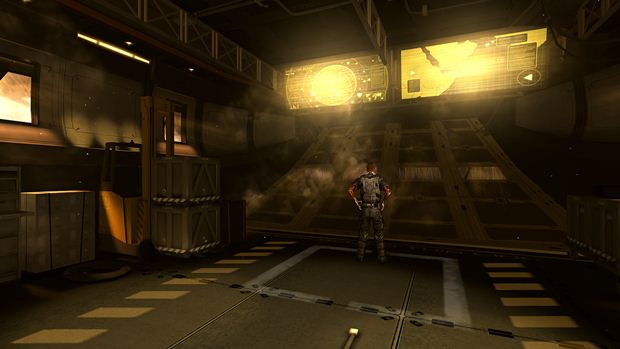 Before Deus Ex: Human Revolution managed to restore some shine and sheen to the Deus Ex series and brand, and make the series viable again, there was the original Deus Ex, and its sequel, which in an early case of consolization, wrecked the brand so much that it became toxic for nearly a decade.

But Eidos hadn’t given up on Deus Ex after Invisible War- they were actually working on a Deus Ex 3, as it turns out (Human Revolution was a prequel). This information comes to us from a recent presentation by Joe Martin at VideoBrains, in which he explored the development of Deus Ex 3, by the same team at Ion Storm as the one that had developed the first two games. The game would have followed one of two possible plotlines.

“The first is about an augmented Black Ops soldier who goes AWOL upon discovering he’s been used for dodgy dealings. His handlers find him and threaten him with either court martial or his wife’s execution if he doesn’t do one final job. What’s interesting is that the missions would have fluctuated between flashbacks and new stories,” says Martin.

“The second story begins immediately after the ending for Deus Ex in which you destroy all global communications. In this story you’d investigate the collapse and try to save your sister from a cult which arises in the chaos.”

There’s more to what he unearths than just that, and if you want to check it out for yourself, I highly encourage that you read the rest of his presentation.