Deus Ex: Human Revolution is a new and unique experience that I could not even sum up in words, but I will obviously do my best to try.  The game is a prequel to the last two games that were released quite some time ago that took place in the future.  Human Revolution also takes place in the future, but it is a future that might not be so far from us as you think.  The world is now just on the verge of biometrics, cybernetics, implants that can increase your intelligence and focus on things.  Of course cybernetic limbs and body parts that at this point in time are being used to save lives and better the world.  This is an obvious peek of goodness that any simple minded person can see that things will change. 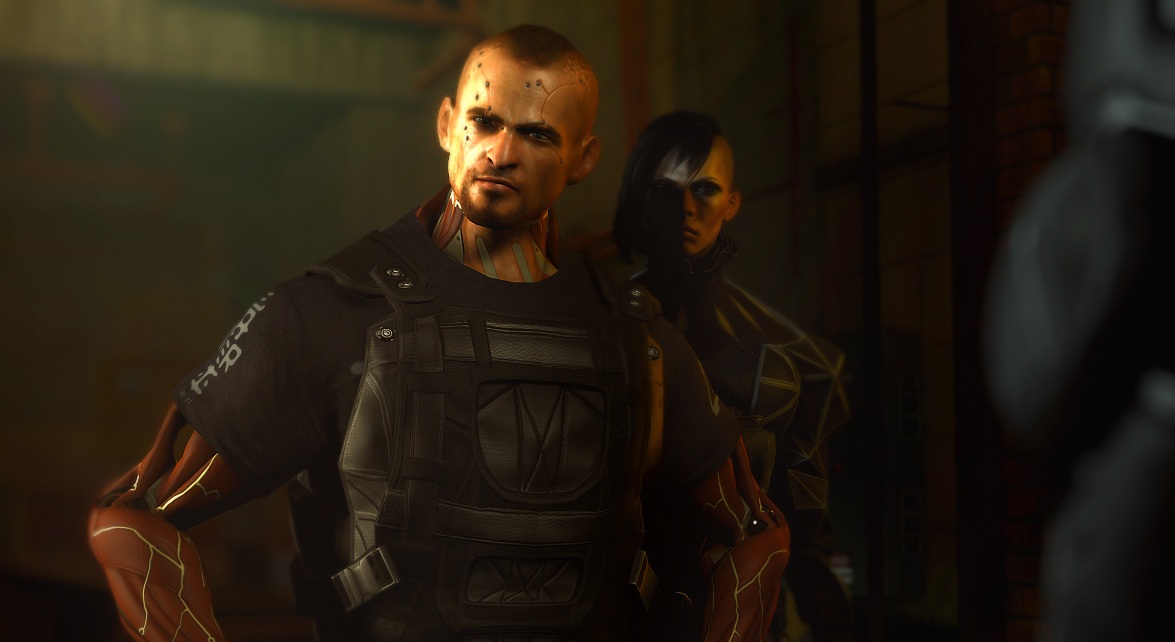 The True Enemy of Adam Jensen

You play Adam Jensen, a man that is the head of security for Sarif Industries, the company who makes all the human augmentations that can enhance all aspects of the human body.  Jensen who has none of this technology in him, winds up having a tragic accident and his life is only saved by the technology of augmentations, replacing his limbs as well as other body parts with cybernetic enhanced ones.  This is all done to him with out choice which you would think is a no brainer, however there is a divided nation of people against these augmentations, with the belief of it going against nature’s will.  After his life saving surgery, Adam does not know where to stand in this issue, but is now forced to live with enhanced augmentations that prove to be very useful, especially in his line of work.

Now before I get into the better portion of the game I must talk about the artistic style of the game.  It is in a sense a masterpiece, with just a simple screenshot itself being a work of art.  The colors, lighting and shading are all brought together to make the game look amazing.  There are older art references as well as modern ones making the game itself a piece of art.  Eidos artists chose a gold and black theme to shine down on all the visuals of the games shading, which strangely seems to fit the titles theme very well.

This world you live in, year 2027, Jensen had a love interest of the name Megan Reed before waking up from the dead thanks to an unwilling operation with the newest technology bringing you back to life.  You then find yourself in a global conspiracy, not knowing where you stand stuck between the extremest that plunge forward in this technology without looking ahead and the ones that are against it, the one you might have been, if given the choice.  Going back to work is what you wind up doing only bringing you deeper in a world of conspiracy that takes you all around the globe, seeing beautiful landscapes to future quarters of human scum.  The tale of Deus Ex: Human Revolution is an amazing ride that could be better than any film or game you have played digging into humanistic aspects that we may or may not ever deal with.  Depending on your social role in the game and what you choose to say can wind up bringing you to different scenarios or even concluding to one of the multiple endings in the game.  This leaves the games replay value hard to not take part in. 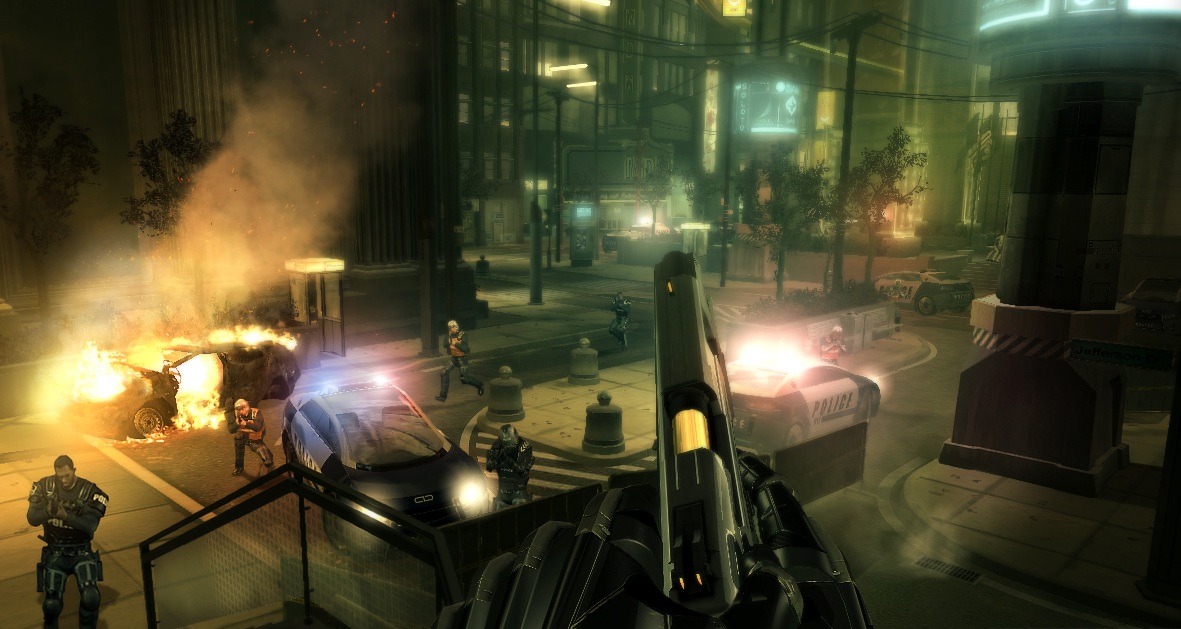 There are four pillars of gameplay, which are combat, hacking, social and stealth.  These are the paths you will take to complete your story.  You can try to just sticking to one, or maybe two.  Most likely you will find yourself in a melting pot using all four pillars as it comes natural.  You would truly have to be a master of the game to only use one as it could be one of the most challenging things you have ever done in a game.  It would require extreme planning and determination, which you are even rewarded for going through the entire game with out directly killing anyone.

The Combat in the game is not what you think.  The can can be considered an RPG but is much, much more than that.  Fortunately you aim and all combat with weapons is not effected by the RPG elements, so when you are aiming at an enemies head, the bullet will hit them square in the face.  As I mention before though combat is not what you think, as choosing to run out there, guns blazing is not an option but rather near instant death no matter the difficulty.  You must still think ahead, and use strategies as well as different tactics to take out enemies.  Ammo is certainly not in surplus, so going the combat route you must be mindful.  You also have to take into mind whether or not you intend on ruthlessly killing everyone which is what today’s games benchmark on, but you also have a choice to stun enemies giving you a more realistic option as if the developers are asking you, ‘if this happened to you, what would you do?’

Speaking if saving combat you have three other pillars to fall back on to advance.  Coming face to face with an enemy give you the option of knocking him out or killing with your augmented knifes, which is quite a scene to see.  You can always go the stealth route and try to work your way around enemies.  The mechanics of the game mix first person and third person together flawlessly.  Just moving around, you are in first person, but you can take cover on literally any wall or object, giving you a perfect vantage point to see enemies.  If you come face to face with an enemy you can either kill him and drag his body out of site from others, or if you don’t mind breaking your stealth you can really mess with him by knocking him out and taking his inventory as well as his weapon.  He will awaken shortly confused but still go to warn others.  I enjoyed doing this very much.

There is also hacking, which brings you into a small mini game similar to hacking in many other RPG’s.  It is fairly fun, in other words it does not get boring, as you can start hacking until inevitably you become detected, forcing you to move quick as a timer pops up counting down to your failure.  Hacking not only gets you into computers, doors and access points, but it can also allow you to turn turrets as well as robots against the enemy, but unfortunately if could be more effective at killing them.  Hacked turrets don’t exactly take enemies out as quickly as they take you out, which is kind of a bummer.  In terms of hacking terminals or reading your average digital newspaper, this can become very important when it comes to the social pillar of the game. 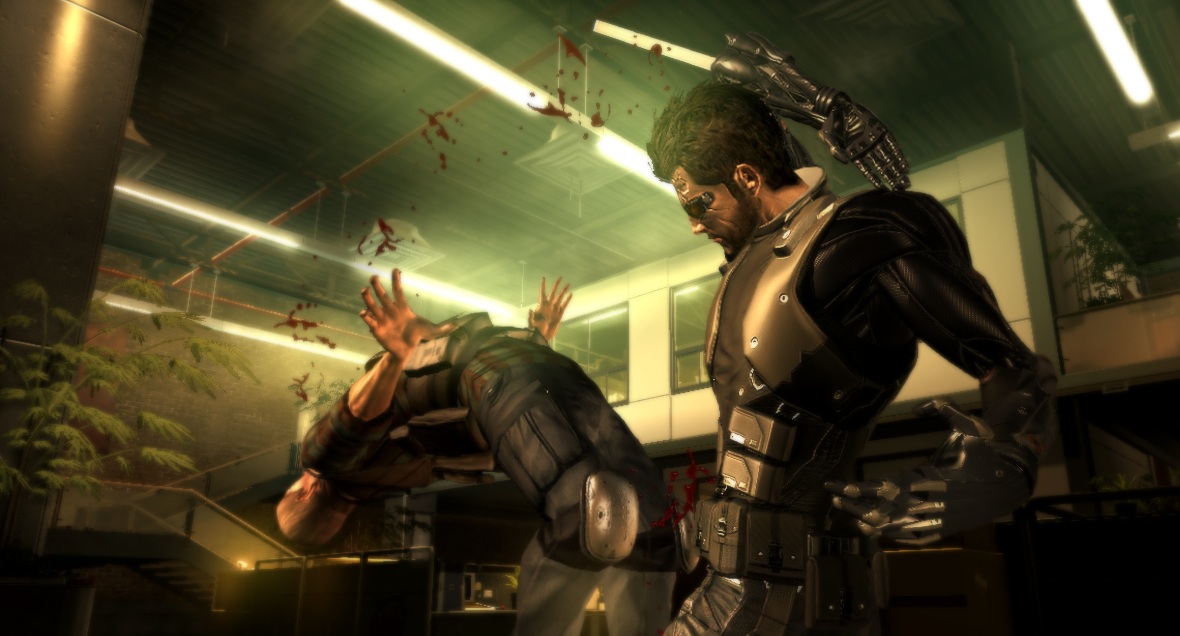 Hand to Hand Combat is a simple one button action.

The social pillar of the game is something that there is no way around.  You must use the knowledge you have gained by talking to people and delving into a deep conversations to be able to make certain choices when speaking with other people in the game.  Reading e-mails and things on computers play a role in this as well giving you more knowledge on things, while sometimes it won’t.  You can convince people to do things for you avoiding battle or confrontation and get more information out of someone.  There are even boss fights that you can talk you’re way out of as it is almost like the speech aspect of the later Fallout games only adding points to something as simple as speech is not quite the same.  Instead you mostly rely on the choices you make when speaking and what you have learned to make those choices.  This is a heavy aspect of Deus Ex: Human Revolution and is very unique as well as one of the things that makes the game so great.

Now with you having almost lost your life, you have nearly all parts of you body augmented in some way.  This means you can upgrade an extreme variety of things, things that are much more complex than let’s say more bullet damage or other basic upgrade your average RPG might have.  Instead of being able to just upgrade your hacking skill (which you will simply need to if you want to hack level 3 terminals), you can upgrade something that will help you play the mini-game of hacking more efficiently.  This might be hard to understand and may seem contradicting, but Edios really went to the trouble to make this a very in depth, thinker kind of game if you will.  Upgrades can be anything from cloaking, seeing through walls, punching through walls, jumping from deadly headlights and the Typhoon, sending a deadly 360 shock wave by slamming your fist on the ground.  Each time you upgrade an augmentation you will need a Praxis which can either rarely be found or gained by experience as you do have a leveling system, but once again, it is a Deus Ex kind of system if you catch my drift. 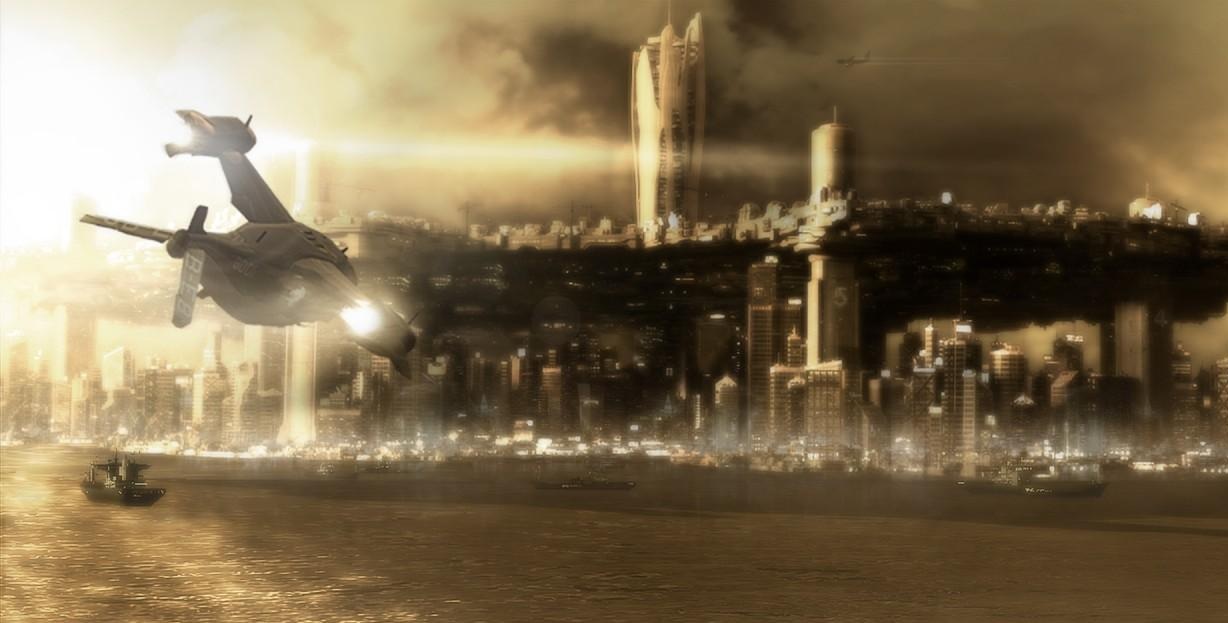 Transportation is not an issue in the fairly large city.

The masterpiece, Deus Ex: Human Revolution really is, does not compare to anything you have ever played or seen before.  I could sit here and say it is a mixture of themes from the films Blade Runner, the Matrix, Terminator or games like Mass Effect, Splinter Cell or Fallout, but it is truly a whole new game that is so unique.  It seems that games now a days build off of each other, which is a great thing, however Deus Ex: Human Revolution seems to have started from scratch will all the knowledge of games and films there is to know.  It combines an artistic style of visuals and themes from humanity to humanities demise that cannot really be explained as well in words as it could experiencing it.  The game is huge with so many side quests that become more than just side quests and more a part of the game. It is as if it’s a film that you don’t want to end and are given the opportunity to learn more about this ‘films’ place set on the future, how it differs from ours, but yet how similar it is.  Every level, building, room, street is designed so well, intertwining with the visual theme of the game and extremely detailed at every inch.  Part of the game is well deserving of fitting in to the world of the ‘Deus Ex’ franchise while the other part is a game that is truly amazing… a game that people should play to decide what there true opinion of video games are and their future potential.  Don’t miss out on this game folks as it is with out a doubt a benchmark for video games.

A master hacker is not all it is cracked up to be. You are sometimes steered toward the same direction no matter the choices you make, in conversation. Lip syncing issues.

A very unique RPG styled game that is a real work of art, in literal and non-literal terms, it touches on concepts of humanity creating truly unique themes set in the year 2027. Replay value is a given.

A copy of this game was provided by developer/publisher for review purposes. Click here to know more about our Reviews Policy.
Tagged With: Deus Ex Human Revolution, Eidos, pc, ps3, Square Enix, xbox 360