That price is across all platforms. 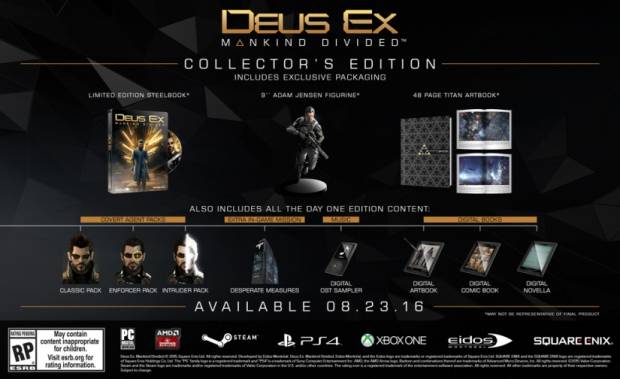 Deus Ex: Mankind Divided‘s release is still a ways off but at least now we know what the price of the collector’s edition is going to be. This version of the game just showed up on the Square Enix store page for the Xbox One, PS4 and PC versions. The game is going to be selling for $139.99 and for that price you will not only get the game but also a ton of different items and pieces of content.

There is plenty of content both in the game, such as a number of different packs such as the The Classic Pack, The Enforcer Pack and The Intruder Pack. Those who purchase the collector’s edition will also apparently get access to an extra in-game mission. When talking about stuff that comes with the title outside the actual content there is a couple of cool little pieces like a digital novella, digital comic book, a digital artbook and a digital OST sampler.

Oddly enough, it seems as though those across the pond are actually getting a small discount if they buy the game on the PC. According to VideoGamer.com the PC version of Deus Ex: Mankind Divided‘s Collector’s Edition is running about $10 cheaper than the Xbox One and PS4 version. No explanation as to why the US versions are all the same price and the European versions have different price points was made available.