A bigger and bolder sequel but Dishonored 2 is largely a similar experience as the original.

It’s interesting to see where a game with a fantastic first entry goes in its sequel: will it be as good as the original, or bad? Maybe it will be a totally different experience all together, or maybe it will remain the same without taking any risks. Following Arkane Studios’ critically acclaimed Dishonored comes the hotly anticipated sequel Dishonored 2. And we finally had the chance to flex our fingers and explore the decrepit streets and dilapidated buildings of this famous stealth/action series.

15 years after the death of her mother and the big cover up in the original Dishonored, Emily Kaldwin has become the empress of Dunwall; and she’s never quite sure if her ruling position is ever as good as her mother’s was. Emily’s royal protector and father — and main protagonist of the original Dishonored game — Corvo Attano watches over and guides her rule. While Emily sits on the throne and struggles with her duties as empress, her enemies are being slaughtered by someone (or something) going by the code name Crown Killer. This setup manipulates the city into thinking Emily and Corvo are on a killing spree to end conflicts with their enemies.

While hosting a party to commemorate the anniversary of the death of her mother, a woman rushes in to inform Emily that she is the sister of her mother. Delilah, the sister, is still alive and ready to rule in Emily’s stead. But when Emily doesn’t quite understand the full spectrum of what is happening, Delilah, who claims to be the rightful heir to the thrown, tries to arrest Corvo and Emily — with her supernatural powers — and accuses the duo of being the Crown Killers themselves. Now it’s up to Corvo and Emily to clear their names. But first you must choose who you’re going to play as in Dishonored 2. That’s right, the game gives you a choice to play as one or the other this time around. Depending on who’s chosen, the story will take some rather interesting turns along the way from either characters’ specific point of view.

"What’s nice though is the level design. Each mission area is designed to tackle your objective in many different ways."

Surprisingly, the story is brought out in a rushed way and is very cliche right from the beginning. There isn’t even time to take a moment and breath by the time you figure out what exactly is going on. The pacing of what happens, when and where are just thrown out of the window in exchange for a quick setup and timing that just never feels comfortable story-wise. It’s a sad spin on the original game’s cleverly unwinding storytelling.

What bleak and dismantling scenery of Dunwall city was in the first game casually passes its rotting corpse into the sequel’s Karnaca — a city that Emily suspects holds the key to getting back her rule on the throne. The decaying oceanside city of Karnaca is brighter and more beautiful than old Dunwall, but only from the outside. Most of your time will be spent inside of buildings and/or hiding in the dark to avoid detection. It’s interesting that Arkane Sutdios chose to make Dishonored 2 nearly aesthetically identical to its predecessor in almost every respect. You won’t notice much difference between the architectural building designs of Dunwall and Karnaca and most of the time it’ll feel like you aren’t even playing a sequel but rather a ‘second disc’ from the first game. Even being built from Arkane Studios’ new Void Engine has brought little difference from the last generation game to this current generation’s sequel. Though Dishonored 2 is not at all a bad looking game, it doesn’t offer much of a difference in performance and spectacle.

What’s nice though is the level design. Each mission area is designed to tackle your objective in many different ways. From going straight in through the door, to finding alternate routes that can be up high, down low or crawling through ducts; the limits of stealth-action have definitely been revved up this time. 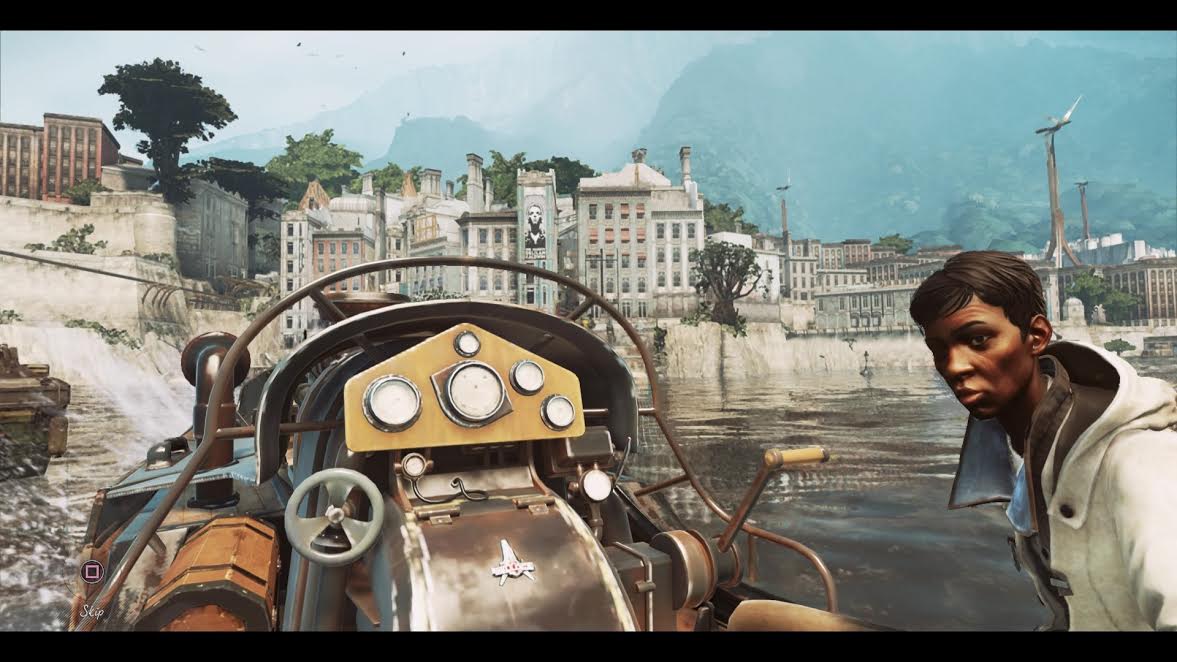 "Supernatural Powers are back with some returning classics and new powers thrown in for style."

Dishonored 2 can be played as a fully blown stealth game where you can make your way through the entire experience without being seen and killing a single soul. Or it can be the total opposite, where you can fight your way through every battle and kill everyone. Or even a little of both if you like. The choice is up to you and what you do with your sword and pistol to get revenge. Your actions throughout the experience are balanced by your play style based on morality choices, such as to kill or not to kill. And everything leads back to the Overall Chaos Meter at the end of each mission. How you play this game is up to you, there is no right or wrong way.

What I found out is that compared to the original Dishonored, this version is much easier to play as an action game. In the original, if you got caught, fighting your way out of battles was often too difficult, making the game almost force stealth upon you — no matter how good you were at blocking attacks with your sword. This game not so much. It’s a more fluid experience where fighting your way from beginning to end is now more comfortable…blocking, choking and throwing enemies is more precise in the sequel. Other than that, I didn’t find any distinctions that could separate the gameplay style from its prequel, however. Everything seems to remain in tact for the most part: some locations are frustrating and take a very slow pace, while others can be run through fairly quickly.

Much like the original Dishonored, at the end of each mission the game will assess how well you did with set objectives you can aim for throughout the game, in a Lethality and Stealth category: civilians killed, hostiles killed, alarms rung and bodies detected. If you decide to be stealthy an Overall Chaos Level will be assigned based on how high or low your Lethality and Stealth objectives were. Either way your play style will ultimately have its repercussions in the end.

Supernatural Powers are back with some returning classics and new powers thrown in for style. Everyone who’s played the original Dishonored will remember some of the classic powers such as Far Reach: which allows the player to span great distances in any direction instantly. Some newer additions include Shadow Walk, which turns Emily into a shadow monster reducing her visibility when walking past enemies. Much like the original game, these powers can be upgraded with Runes that are scattered throughout each mission stage — just like in the first game. Along with finding Runes to gain new powers, Bonecharms return as well and allow the character special abilities suited more towards combat and stealth rather than power. 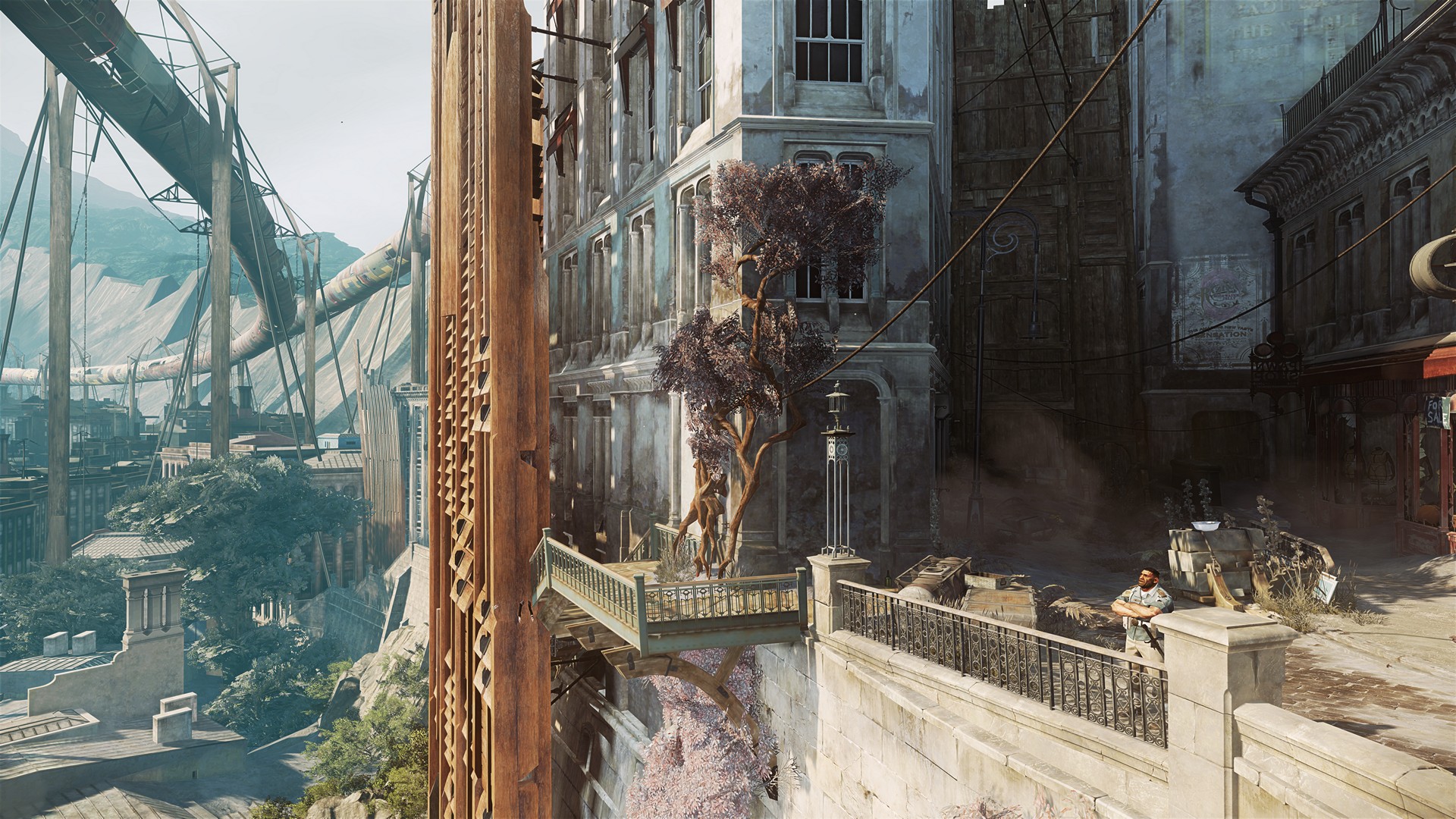 "In the end, Dishonored 2 is just pretty similar to the original. It is a game that took less risks, borrowed several aspects from the original and built on it."

The all-new Bonecharm crafting stations are actually pretty neat. Creating all new Bonecharms is fun but there isn’t  a lot of added bonus to the the overall experience. You may be able to block an extra attack or fall greater distances without getting hurt, but without the ability to craft and manipulate Powers, the Bonecharm crafting ability is kind of left in the dust. The game does offer a bonus challenge where you can play the entire game without powers.

In Dishonored 2 we finally get to hear Corvo and Emily talk for the first time, and it’s not good — at least for Corvo. His sickened inflection sounds horrible and he isn’t even sick — for all I know. And it’s not just his voice. Several others in the game give off a stereotypical “video game voice” and persona that, in some cases, is almost cringe worthy. On the other hand, having a playable character voice his and her thoughts gives us more of what’s inside, what they’re thinking and what they feel at that very moment — something we didn’t receive in the first game, which can be a very interesting take on a new perspective. In the original we had to rely on tons of notes, books, and other ways of reading the backstory. That’s still the case in Dishonored 2. If you want to know every dirty, little secret in Karnaca expect to read through notes during your play time.

In the end, Dishonored 2 is just pretty similar to the original. It is a game that took less risks, borrowed several aspects from the original and built on it. Although the experience is largely the same compared to the original, the game’s two different characters with different play styles adds a bit of variety to the gameplay and story. However there are times where I felt that a world built on mystery, lore and a wonderful atmosphere can offer so much more. There’s plenty to enjoy in Dishonored 2 if you’re a fan of the original. You will be treated to some outstanding missions, a bigger campaign and world, and intriguing powers but if you’re looking for a new and inventive take on the series then Dishonored 2 might not be enough to whet your appetite.

Final Verdict:
GREAT
Dishonored 2 is ultimately quite similar to the original game with subtle changes to gameplay. However its dual campaign mode should provide enough excitement and fun to fans and newcomers alike.
A copy of this game was provided by Developer/Publisher/Distributor/PR Agency for review purposes. Click here to know more about our Reviews Policy.