That's a lot of dead demons.

When I was a kid, I thought DOOM 64 was an N64 port of the original DOOM, or perhaps both DOOM and DOOM II. Part of that was because I had only played the first two DOOM games at friends’ houses. The other part of it was that DOOM was being ported to every platform that could run it, and reliable information on video games was hard to come by unless you read it in a gaming magazine. Mostly, you learned by walking into a Blockbuster or a retail store that sold games and picked one that had cool box art. That strategy served me well as a kid, so I did what most people I knew did: assumed it was like StarCraft 64 or Quake 64 (a port of a PC game for the N64, which weren’t uncommon), and moved on. Besides, when DOOM 64 released in 1997, the world already had Quake, and GoldenEye 007 was a few months away. Half-Life and Starsiege:Tribes would release the following year. DOOM was cool, but it was old news. And I didn’t need to play a game I’d played on PC on my N64.

Turns out, I wasn’t the only person who made this mistake. A lot of people didn’t know what exactly DOOM 64 was, and despite the mindshare many of its top releases still occupy, and the importance of those games, the Nintendo 64 was not a popular console. Many people simply didn’t play the game. It was also never officially re-released, though people have made admirable efforts to recreate it. As a result, DOOM 64 became something of a cult classic. Few people had played it, and it was hard to acquire. Thanks to an excellent enhanced port by Nightdive Studios, that’s no longer the case. The only question now is this: does DOOM 64 hold up?

Before we talk about what DOOM 64 is, let’s discuss what it isn’t: it isn’t a port of DOOM, but rather a sequel that takes place after DOOM II and Final DOOM. Even though the Doom Marine laid Hell to waste the last time around, a powerful entity with the ability to rejuvenate fallen demons survived. He’s sent back to Mars to finish the job, but surprise surprise, the whole thing is a trap, and you’ll have to fight your way out. This means that DOOM 64 is essentially DOOM 3 before DOOM 3 was DOOM 3. DOOM 64 is also one of the only games in the series not developed by id Software. Instead, it was internally developed by Midway under id’s supervision. Got all that? Good. 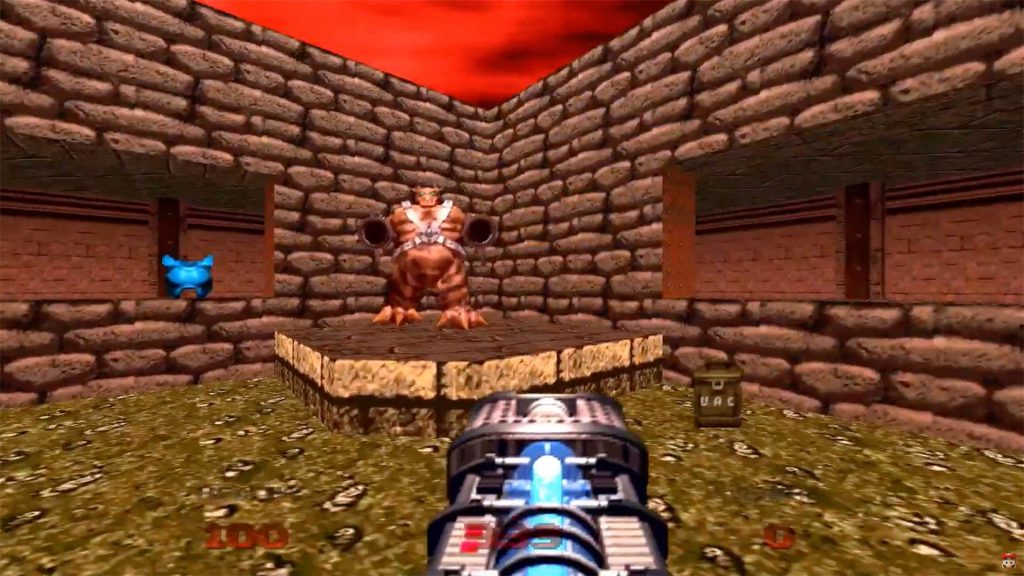 "In terms of gameplay, DOOM 64 feels very much like DOOM. There’s no time wasted on story or setup; DOOM 64 drops you straight into the action, hands you a shotgun almost immediately, and sets you off to rip and tear to your heart’s content."

Let’s get the basics out of the way: Nightdive Studios has done an excellent job of remastering DOOM 64. The game’s graphics have been updated, it supports modern widescreen resolutions and anti-aliasing, and everything looks very crisp. Everything is still a little blocky, but that’s a result of how DOOM 64 looks, not any issue with Nightdive’s work. The game looks very, very good, and runs even better. DOOM 64 runs at a smooth 60 frames, and I never noticed any slowdowns.

Still, there are problems. DOOM 64 is how dark it is, and I don’t mean in terms of its content. This game is dark, from its environments to its menus, which means that it can be very hard to see menu options or certain environments. The most obvious example came in a level where I was dropped to the floor of a big room by a trick platform. At the default settings, it was pitch black, and I couldn’t see anything, including the invisible Spectres that were chewing on me. The only way to solve this problem was to crank up the game’s brightness. It’s a solution, but it’s a shame that it was necessary.

In terms of gameplay, DOOM 64 feels very much like DOOM. There’s no time wasted on story or setup; DOOM 64 drops you straight into the action, hands you a shotgun almost immediately, and sets you off to rip and tear to your heart’s content. DOOM’s appeal is simple, and the team at Midway understood that and didn’t veer too far from what made DOOM and DOOM II two of the best games ever made. This game didn’t reinvent the wheel, and while that made DOOM 64 feel dated in 1997, it actually helps it today. This game feels like a true sequel to DOOM II, and like DOOM and DOOM II, DOOM 64 actually holds up better than many of the popular 3D shooters of the era, like Turok or GoldenEye. 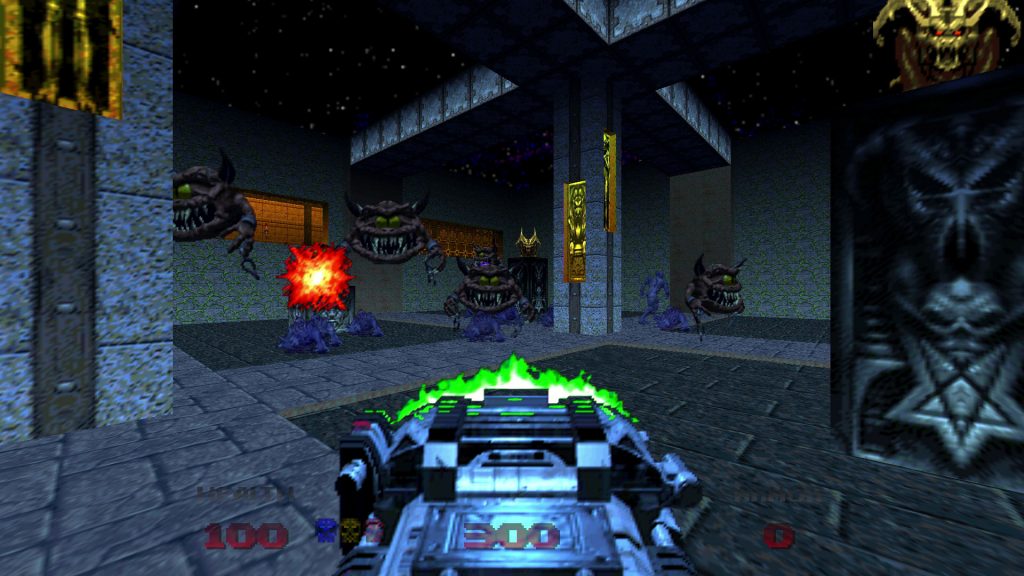 "DOOM 64’s engine is more advanced than DOOM or DOOM II’s, which allows for more visual variety, better lighting, and better scripting, which allows for encounters that you simply wouldn’t see in the original games."

As similar as DOOM 64 is to the games that inspired it, it is different in noticeable ways. The first is graphical. All of the demons from DOOM 64 look different than their DOOM and DOOM II counterparts, to the extent that DOOM 64’s designs are obvious influences on several of the “new” demons that appear in DOOM Eternal, though they maintain enough of the original visual style here that you can tell what’s what. In that same vein, DOOM 64’s engine is more advanced than DOOM or DOOM II’s, which allows for more visual variety, better lighting, and improved scripting, which allows for encounters that you simply wouldn’t see in the original games.

Not everything is an improvement, though. The animations for your guns, for instance, aren’t as detailed. You won’t see the DOOM Marine cock his shotgun after you fire each round, and there’s no animation to reload the super shotgun after it fires. Mostly, the guns just move back and forth, and the game’s excellent sound effects do the rest. You can hear, for instance, spent super shotgun shells eject and hit the floor, and the sound as new ones are loaded, even if you can’t see it. This goes a long way, but the visual downgrade is still impossible to ignore. In the same vein, you don’t see the animated face of the Doom Marine like you did in DOOM and DOOM II, which is kind of a bummer. Revenants, Arch-viles, and Chaingun zombies are also no-shows. The end result is a game that mostly, but not always, looks better than its predecessors.

DOOM 64 makes up for these shortcomings with some new editions. The biggest is the Unmaker, which also appears in DOOM Eternal. A superpowered laser weapon, the Unmaker shares ammo with the plasma rifle and the BFG, and can be upgraded by finding demon keys scattered throughout the levels. There are also two new demons. The other major difference is the game’s music. The heavy metal-inspired tracks from previous games are gone, replaced by a more ambient soundtrack that makes things feel genuinely creepy. 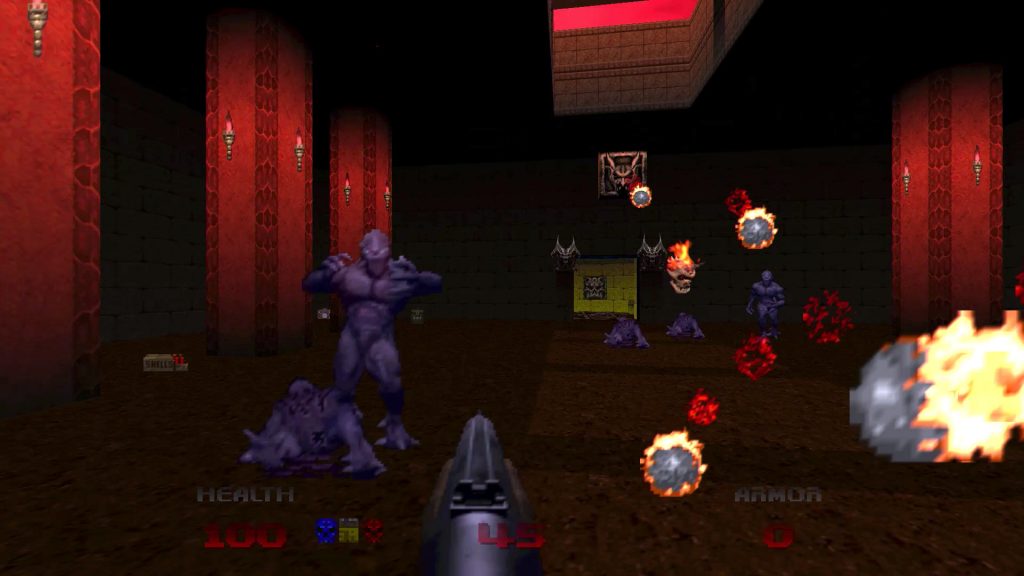 "DOOM 64’s major accomplishment is its level design, however. Levels are varied, both visually and in terms of gameplay, and in traditional DOOM fashion, packed with secrets, whether you’re in the abandoned base at the beginning of the game or the deepest levels of Hell."

DOOM 64’s major accomplishment is its level design, however. Levels are varied, both visually and in terms of gameplay, and in traditional DOOM fashion, packed with secrets, whether you’re in the abandoned base at the beginning of the game or the deepest levels of Hell. DOOM 64 has one of the best set of maps a DOOM game has ever had, a result that is only boosted by the re-release’s inclusion of several “lost levels” and a new final level that ties into DOOM Eternal. My only complaint is that certain levels rely a bit too much on timed switches, and it can be irritating doing certain sections several times because you weren’t fast enough. When you are and aren’t feels extraordinarily arbitrary, and makes certain sections a lot more irritating than they should be. This isn’t helped by the game’s floaty, momentum-based movement, and you’ll probably fall off things you didn’t mean to a couple times because of it. Overall, though, DOOM 64’s levels are excellent. They may not quite hit the highs of John Romero’s best work, who remains the best level designer to ever work on the series, but they avoid the unfortunate excesses of DOOM and DOOM II’s worst levels, making for a more consistent experience overall, even if it doesn’t quite hit the same highs.

For better or worse, DOOM 64 is a classic DOOM game and one that is still a joy to play several years later. This isn’t a modern shooter. There isn’t much plot, levels are sprawling exercises with multiple levels and lots of hidden goodies, and it’s very fast and very violent. If those things don’t appeal to you, you won’t like DOOM 64. But if they do, you’ll like it a lot.

It still doesn’t have multiplayer, and I wish that Nightdive had added a co-op mode, but this is an excellent port of a game that was previously lost to time, and one that still deserves to be played. I think I would have liked DOOM 64 if I’d realized what it was when I was a kid. I can imagine myself staying up late with my friends, passing a controller back and forth, each of us glued to the TV. I can’t go back and tell that kid that he should pull DOOM 64 off the wall at his local Blockbuster and give it a chance. But I can give it the attention it deserves now, because DOOM is eternal, and those demons aren’t gonna slay themselves.

Movement is a little floaty. Time switches can be annoying. It's very dark. No multi-player or co-op. Simplified gun animations. Missing some demons from DOOM II.

Final Verdict:
GREAT
Despite a few minor errors, DOOM 64 is still great 20 years later, and Nightdive's excellent port adds extra content to a game that is already worth your time.
A copy of this game was provided by Developer/Publisher/Distributor/PR Agency for review purposes. Click here to know more about our Reviews Policy.