DOOM Review – Back With A Bang

Calling DOOM “fast” is the biggest understatement of the year. Heck! It’s actually “insanely” fast. You will be moving and shooting a lot and the game does an overwhelmingly amazing job at throwing bucket load of enemies on the screen for you to take them out in the most gruesomely awesome way possible. The on-screen action and gameplay is ridiculously fast and this is exactly what players expect from DOOM and boy, haven’t id Software developed a completely orthodox shooter, something which is reminiscent of the older days.

Make no mistake, if you are looking for a contemporary shooter, you won’t find it in DOOM. The game is completely orthodox and almost unusual in terms of level design and gameplay mechanics. Let us begin with the single player campaign. In an age where campaigns in first person shooters last around 5-7 hours, DOOM features a surprisingly long single player component. You will easily invest around 12 hours in the campaign which is double than what most first person shooter games offer. At times you will feel that you are retreading or doing the same thing over and over again but the game counters this by introducing a new enemy type or simply throws hordes and hordes of enemies to keep you on your feet. There is never a dull moment in DOOM and this is all down to the immaculate pacing the game offers.

"You will easily invest around 12 hours in the campaign which is double than what most first person shooter games offer."

Running on id Tech 6, the game looks amazing from a technical standpoint. The game utilizes heavy post processing effects such as cinematic motion blur, tons of explosion and runs at an almost locked 60 frames per second although I did encountered some minor drops on the PS4 version specially when there were a ton of enemies on the screen. The maps in the single player campaign are wide and expansive and the game generally encourages you to explore your surroundings but at the same time throws enough enemies from time to time so that you don’t lose your focus from the action.

Unfortunately, bigger levels mean increased load times and DOOM has one after each level. The load times can be a pain since they range anywhere from 30 to 50 seconds and to be honest, they can kill off the pacing and tension at times. It just feels odd that the game does a fantastic job of creating that tension at the end of the level and literally kills it by introducing long and lazy loading screens.

As I have already mentioned before, DOOM features an orthodox game design and this is also reflected in the enemies. There are a ton of enemies to be found in DOOM; whether it is the simple and easy possessed humans or the annoying Cacodemons or whether it is the intimidating Cyberdemon to the disturbingly gross Ditto, DOOM delivers one of the most compelling groups of enemies that you will ever fight in a first person shooter. And it does not end there…they are not different in name but they also vary in terms of behavior and characteristics. Some enemies like the ones who are possessed are incredibly slow and are easy to take down whereas the Revenants are agile and hostile.

All of them are intricately animated and some of them may even use the environment to take you down. There are also quite a few bosses in the game and without giving too much away, let me tell you that they are not in any way pushovers. They will absolutely push you to your limits and there was one boss in particular that gave me a rather hard time. The key to winning these encounters is to consistently upgrade your armor and weapons and this is yet another area where the new DOOM truly shines. 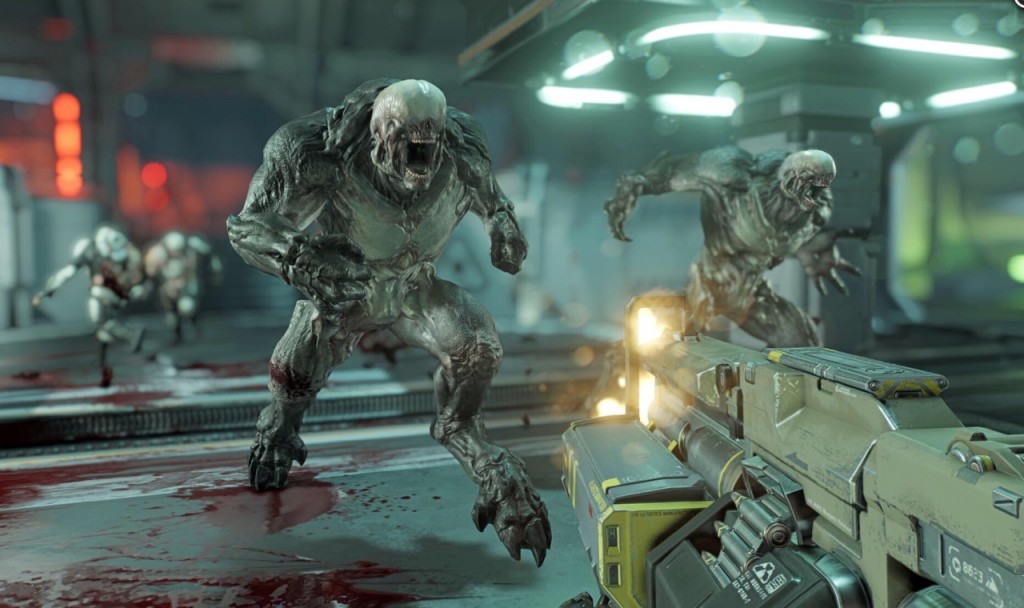 "Besides the underwhelming weapon sounds, I wasn’t a particularly big fan of the plot in the game. The game is touted as a reboot and to be honest, the story did not suck me in. It’s perhaps due to the way the story is told but this also means that the new DOOM is highly accessible to newcomers."

DOOM provides the player with an arsenal of weapons, some new and some old. You will have access to some oldies such as the BFG9000 (if you are a newcomer than you should know this is the one of the most iconic weapons in the series), Super-Shotgun, Heavy Assault Rifle, Plasma Gun backed up by several throw-able weapons such as Frag and Siphon Grenades. My personal favorite was the Chainsaw and it was the perfect weapon to rip and shred the demons into tiny little pieces. The good thing about this weapon is it increases ammo drops but the down side is that it uses fuel canisters so if you run out of them you won’t be able to use this little baby unless you find more fuel.

The game also features a customization system wherein the player can mod the weapons. So for example, your shotgun can double up as launcher and so on. These mods are unlocked by ability points which you will earn during normal playthrough of the game.  The weapons feel tight and the shooting largely feels satisfying but their sound effects were a bit underwhelming such as the Plasma Gun for example.

Besides the underwhelming weapon sounds, I wasn’t a particularly big fan of the plot in the game. The game is touted as a reboot and to be honest, the story did not suck me in. It’s perhaps due to the way the story is told but this also means that the new DOOM is highly accessible to newcomers. You don’t need to know anything about the series’ past; you can jump right into the action. Overall, the single player is a huge part of the entire DOOM package which is unusual for a shooter releasing in a contemporary era…but then again, DOOM is not a contemporary shooter so it’s great to see the campaign was a priority for id Software.

If the single player was anything to go by, you can expect even more chaotic proceedings in the multiplayer component. Note that id Software teamed up with Certain Affinity to develop the multiplayer portion and for the most part it’s a ton of fun. This is also where we see DOOM leaving some of its orthodox gameplay mechanics to adapt itself to the modern system of customization and progression which will allow you to customize your weapons and armor to the T. 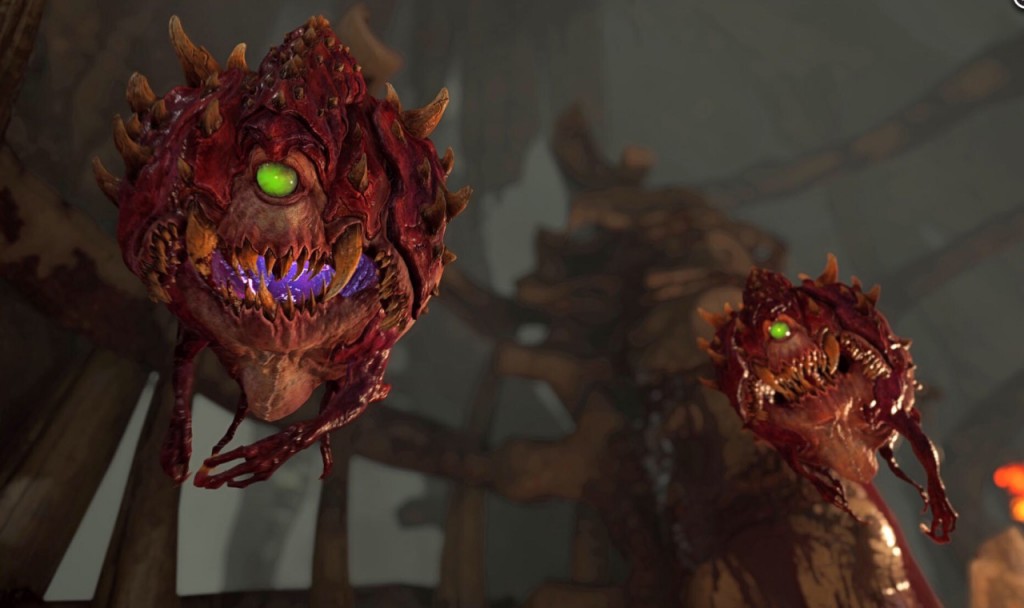 "To close it off, DOOM is by far the best first person shooter you will play this generation."

There are number of modes such as Clan Arena, Domination and Warpath which takes place across a number of maps such as Excavation, Helix and Beneath. Much like the single player component, the map design is not contemporary so it may get a bit confusing if you decide to jump directly into it without playing the single player campaign.

The game’s progression system places its emphasis on playing more rather than winning. Essentially, as you play more you will be able to unlock new equipments, armor and weapons. The developers have also added hack modules which gives the player a slight advantage such as the Alarm module will activate a audio cue which will play when a enemy is nearby and the Infinite Ammo module will give the player infinite ammo for a short amount of time. The game gives two hack modules whenever you complete a match and each of the modules has three different tiers. I found this system integral in changing the momentum of the match whenever I found myself or my team in a difficult position.

The game also comes packed in with a level editor. Dubbed as SnapMap, it’s a set of editing tools which allows the player to develop their own levels. It provides a rather in-depth set of options and it will be interesting to see what the community does with it. You can bet that we will see some of the classic DOOM levels re-developed using SnapMap in the future.

To close it off, DOOM is by far the best first person shooter you will play this generation. It’s not something you will expect. Just go in without any unusual expectations and you will be pleasantly surprised by the depth the game offers.

And did we mentioned that the game allows you to play classic levels form the older DOOM games?

Now we are talking!

Final Verdict:
AMAZING
DOOM is one of the best first person shooters of this generation. Just go in without any unusual expectations and it will provide you with an experience unlike any other shooter.
A copy of this game was provided by Developer/Publisher/Distributor/PR Agency for review purposes. Click here to know more about our Reviews Policy.