Have some acid-washed retro 80's art in your classic brawler. 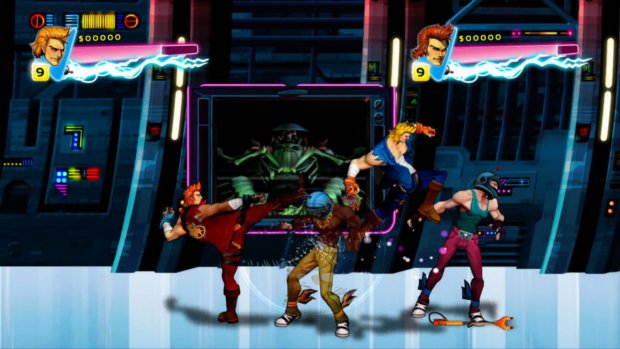 Billy and Jimmy, if you haven’t heard, have returned and they are apparently “more radical than ever”. Oddly, despite having to save “their shared love interest Marian”, they do go up against a dude named Skullmageddeon in Majesco Entertainment’s Double Dragon Neon.

The retooled 2D beat-em-up is now available on PlayStation Network for PS3 and Xbox Live Arcade for XBox 360.

WayForward wants to put a “radical new art direction pulled directly from the 1980s, in an acid-washed, electrical, over-the-top celebration of that decade’s aesthetics” to Double Dragon Neon – which is good. Now whether people actually like it is a different issue. How well it puts across the classic Double Dragon gameplay rather than overshadowing it is up for debate.

You can pick up Double Dragon Neon on PSN for €7/$9.99 and on Xbox live Arcade for 800 Microsoft Points. And if you’re one of those Playstation Plus people, you can play the game for free from now until January (lucky you).