Posted By Shubhankar Parijat | On 14th, Nov. 2010 Under Feature, Slider

BioWare’s games are known for their comprehensive dialogue choosing system which shapes the story according to the choices we make throughout the course of the game. The Dragon Age series is no different. Dragon Age: Origins featured an innumerable amount of dialogues to be chosen from for each type of character, within each type of race, and varied as our character’s nature changed throughout the game. With so many choices to make, and each time different choices appearing, the game never got repetitive, even in the repeat playthroughs. Dragon Age II will feature the same trademark BioWare system, though this time, the “dialogue wheel” made famous by the brilliant Mass Effect series will be incorporated in the game, but players will always only have three choices to choose from, with each of them clearly representing the “Good,” “Bad” and “Badass” choices we choose to make in the game.

The main question that can raise several doubts in the hearts of many hardcore Dragon Age fans: will this strip down the depth and the complexity of the experience? Will this make the entire game a more linear and straightforward experience, something that fans of the series, and the developer, do not want at all? We are not sure yet. For all we know, the game will still house infinite possibilities for the story to choose from, depending upon the choices we make throughout the game. Plus, the “wheel” system is much more user-friendly and polished than the list of dialogues we were given in Dragon Age: Origins. Add to that the fact that all the dialogues we choose will be voiced like in Mass Effect and Mass Effect 2, and we might just have BioWare’s most comprehensive title at our hands.

The Characters And Hawke As The Protagonist 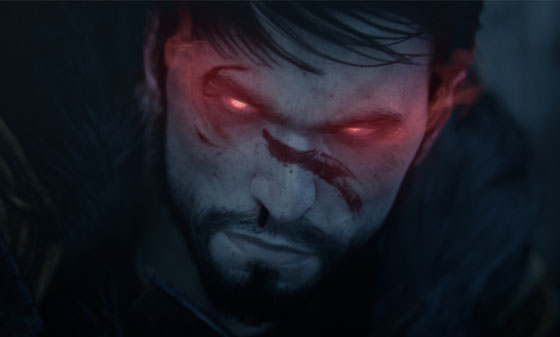 Hawke is a really, really cool guy, from what we have seen till now.

Hawke is not a born leader, not a Champion from the very beginning of his adventure. He is a mere refugee in the beginning of the game in the city of Kirkwall, and when his city is attacked by the Darkspawn, he flees the city, and thus his journey begins, until he ultimately becomes the Champion every one in the world of Thedas was looking for, and defeats the Darkspawn and ends the Blight (probably…). This time around, though, the protagonist is Human, and will remain human. While you do have classes to choose from, like the typical Rogue, Mage and Warrior and some new additions, the race of the protagonist cannot be changed- you will have to remain a human.

However, do not worry, Hawke is cool anyhow, human or not. From all the trailers, screenshots and other information we have about the game, Hawke is this really cool character that the player will feel attached to. If Hawke is even half as cool as Shepard in Mass Effect, I’m good.

Some characters from Dragon Age: Origins, like Isabela, will be making a return, but BioWare have not told us much about that yet. We’re guessing someone from Morrigan’s family will return, and maybe some old friend from the Grey Wardens. 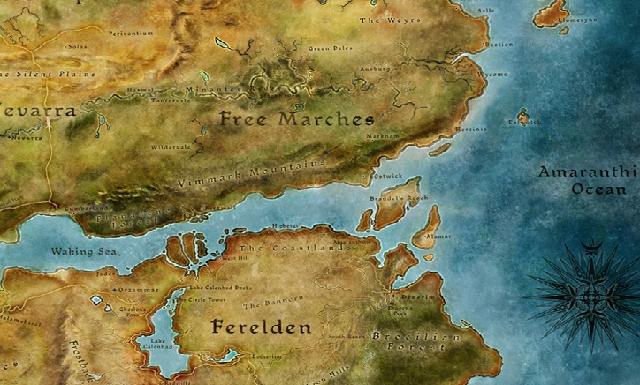 While Dragon Age II is still set in the world of Thedas, it is not set in Fereldan anymore, but in the nation named Free Marches, shown in the map above, with the protagonist Hawke beginning his adventure from the city of Kirkwall. The game spans the story of an entire decade- as the player changes the history and the world around him as time wears on-, as opposed to Dragon Age: Origins, which finished up the story in just two years.

We know practically nothing other than this on the game’s story, but a sixth Blight soon after the fifth that occurred in Fereldan seems like a bit too much for the people of Thedas to handle.

Dragon Age II seems like the perfect sequel- a lot of great new changes and additions, perfect refinement of the already great formula seen in the original game, and a grand new story, character and presentation as an extra treat for the gamers. But we still cannot pass judgement, since we still have next to no information on the game. We can only hope for BioWare to do what they have been doing for so long, and make Dragon Age II their best title ever.