Our final verdict on Dynasty Warriors 8: Empires on PS4 and Xbox One.

Dynasty Warriors 8: Empires on the Xbox One is an extremely disappointing port. For those confused on how it differs from vanilla Dynasty Warriors 8 (we’re not even going to attempt to explain how it’s different from previous numbered entries), Empires functions as an expansion of the core experience. It’s meant to bring a strategy/RPG/management bent to the proceedings, giving some sort of volume to the mindless, repetitive third person hacking and slashing. However, in many ways, Dynasty Warriors 8: Empires epitomizes the somewhat questionable approach taken by Japanese developers in “remastering” their older titles.

This isn’t even saying anything about the audience Dynasty Warriors 8: Empires is meant to cater to on the Xbox One. For a series that is most popular in Japan, why release an Xbox One port in a region where the console is struggling? For that matter, why make this port a complete and unmitigated mess compared to the PS4 port? It’s bad enough no one wants to buy an Xbox One in Japan but why not actively work towards driving consumers towards the PS4?

Enough has been said about Capcom’s cross-generational development on Resident Evil: Revelations 2 and how it really could have improved the visuals on Xbox One/PS4 rather than adding a few bells and whistles on top of the previous gen versions. By comparison, Dynasty Warriors 8: Empires slaps a 1080p resolution on the PS4 port and then strips away anything noteworthy in visuals before bringing it to the Xbox One. What’s even more sad is how this isn’t even a good looking game to begin with, whether you’re playing it for more than an hour out of some deep sense of social responsibility and/or self-loathing, but we’ll get to that.

Head to head video comparison between the PS4 and Xbox One versions of Dynasty Warriors 8 Empires. Select 1080p for best possible quality.

Dynasty Warriors 8: Empires runs at 1080p resolution on both Xbox One and PS4 but neither runs at 60 frames per second. Sure, it’s stable enough at times, even as you’re cutting up 500 enemies at once but in terms of quality, the PS4 looks superior. How superior? It feels like the Xbox One version is from the previous generation of consoles. Texture quality is bland, despite looking noticeably better than the PS3 version; environments lack detail of any kind, making the maps little more than huge arenas you skitter around; and the level of detail faces severe issues throughout. There’s also the issue of shadow dithering, which can best be noticed by shadows “shimmering” even as characters stand still. While persistent in both versions, the PS4 at least has smoother looking shadows. Did we mention that characters alternate between casting and not casting shadows? It’s funny at best and embarrassing at worst.

Speaking of smooth, there is better anti-aliasing (FXAA) on the PS4 version and it helps the characters, clothes and armour – all ornately designed – thankfully stand out. The Xbox One version isn’t as lucky and at 1080p, the jaggies become nearly impossible to ignore, even in the heat of battle.

Real time particle effects have been implemented pretty well despite the insane amount of characters on screen. [PS4 followed by Xbox One] 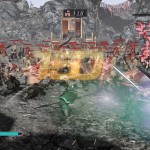 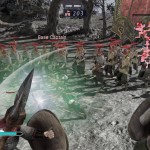 Some NPCs cast shadows and some merely don’t, not to mention that both versions suffer from shadow dithering. 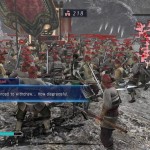 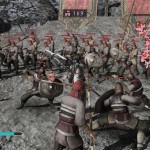 Animations are rather disappointing. Each and every animation is repeatedly used across each NPCs. 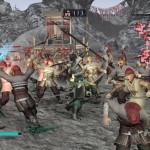 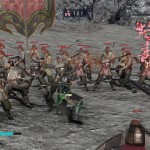 The battles themselves can be admittedly great. Unleash a super move and watch as your enemies either collapses at once or your character goes skidding around, only to wipe them out in an instant. This extends to the signature combos as well and there are no frame rate drops at any point. Volumetric and alpha effects including fire and weapon effects are well done.

We found significant issue with the hit detection in our technical analysis. It seems like weapon shots lack that desired impact but when viewed visually, it’s outright bizarre to see your character shuffling enemies around simply by dashing or a single slash stunning multiple foes at once. The animations themselves, outside of the super moves, look awkward. At times when your character is wielding an oversized weapon that doesn’t suit them, you feel some sense of what Dynasty Warriors characters are supposed to be like – serious to the point of hammy – but the presentation still comes off as extremely shabby.

In terms of additional graphical features, Dynasty Warriors 8: Empires lacks depth of field, motion blur, ambient occlusion, you name it. Keep in mind once again that neither the Xbox One nor PS4 versions are running at 60 frames per second. The Xbox One version looks significantly worse in every single way too and yet we couldn’t get more than 30 frames per second. At least both versions lack anisotropic filtering as well rather than the PS4 always getting shafted.

Head to head screenshot comparison between the PS4 and Xbox One versions showcase the lack of AA in the Xbox One version. The PS4 version is employing FXAA which results into smoother image quality. 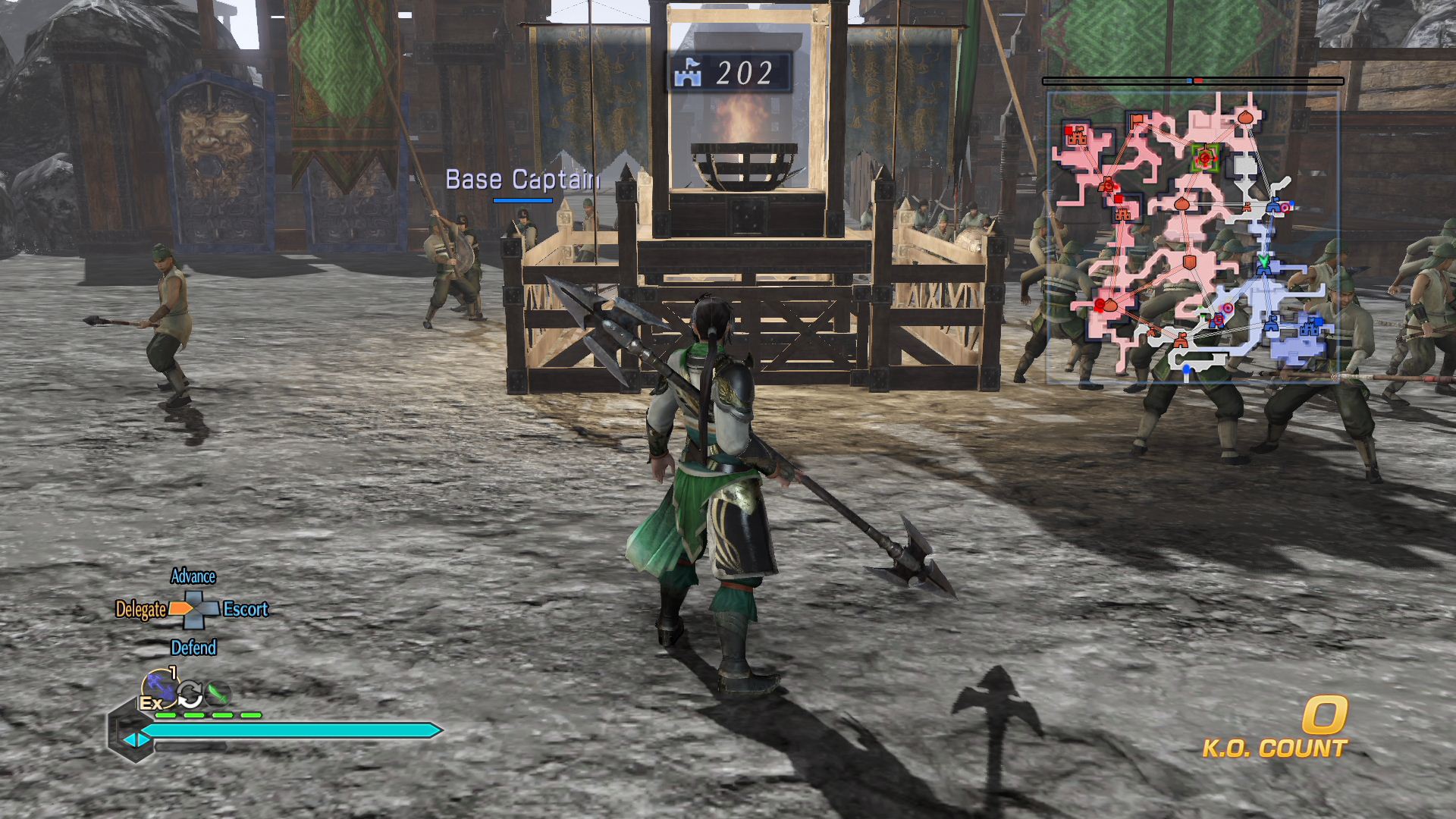 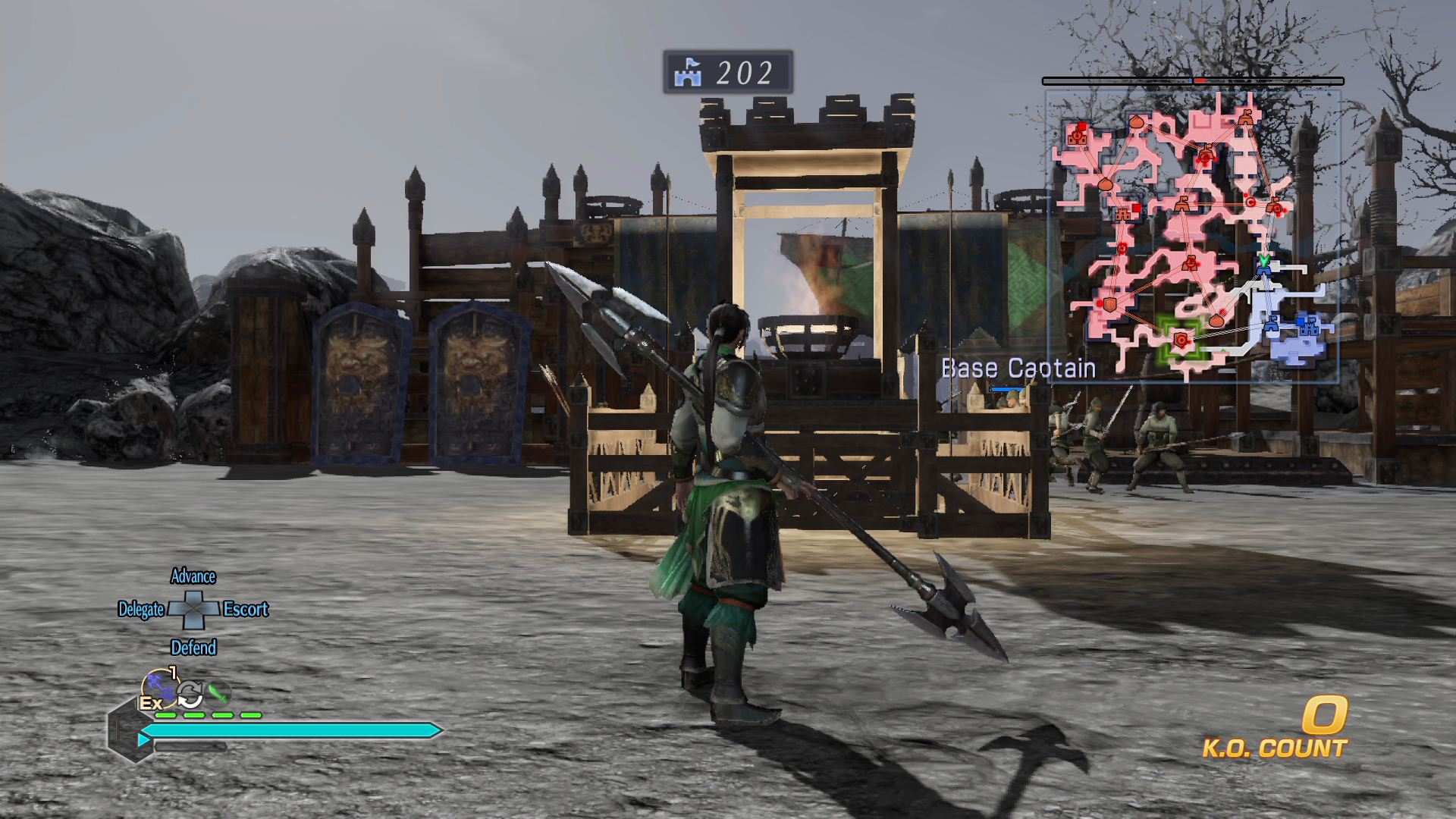 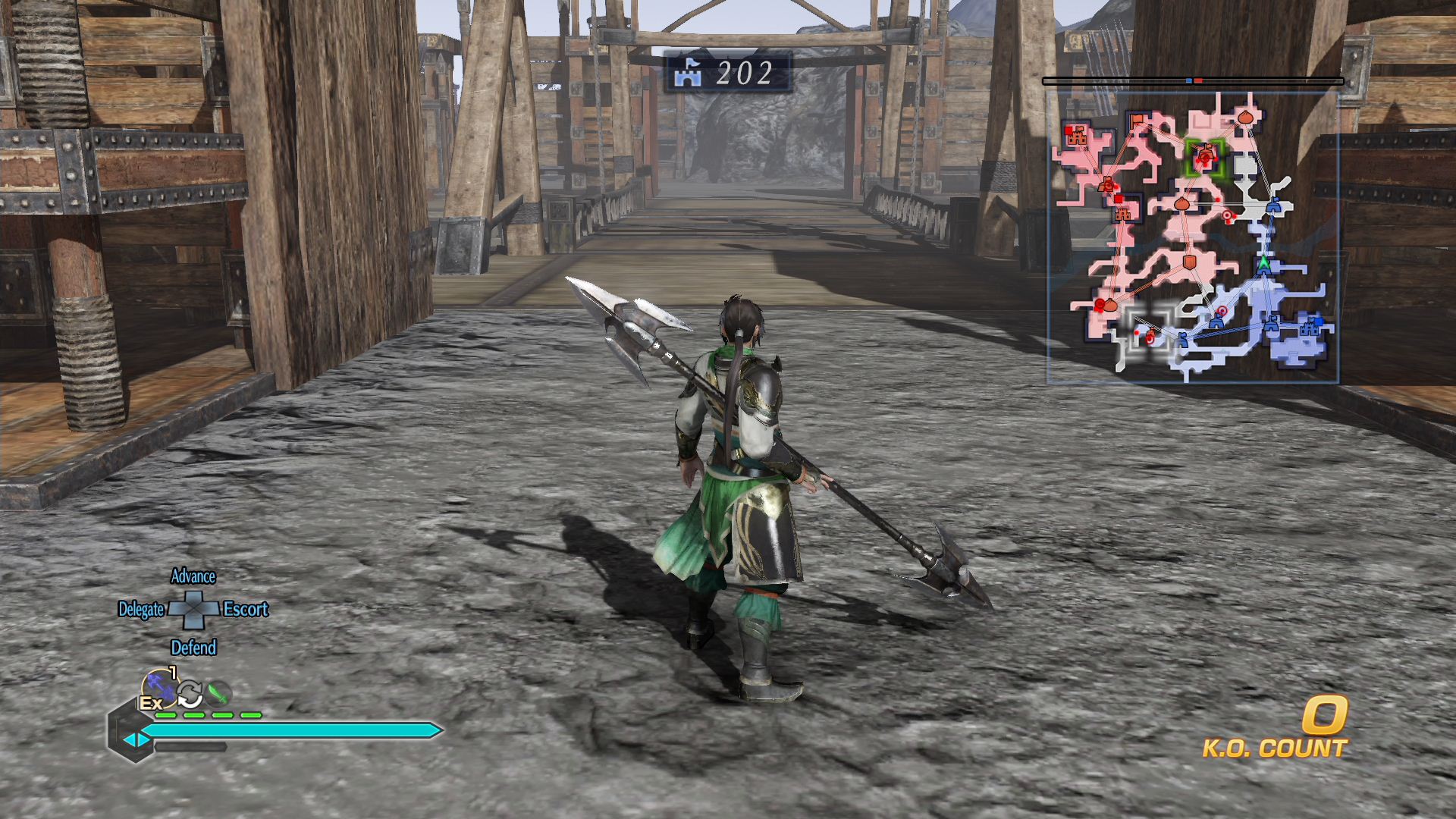 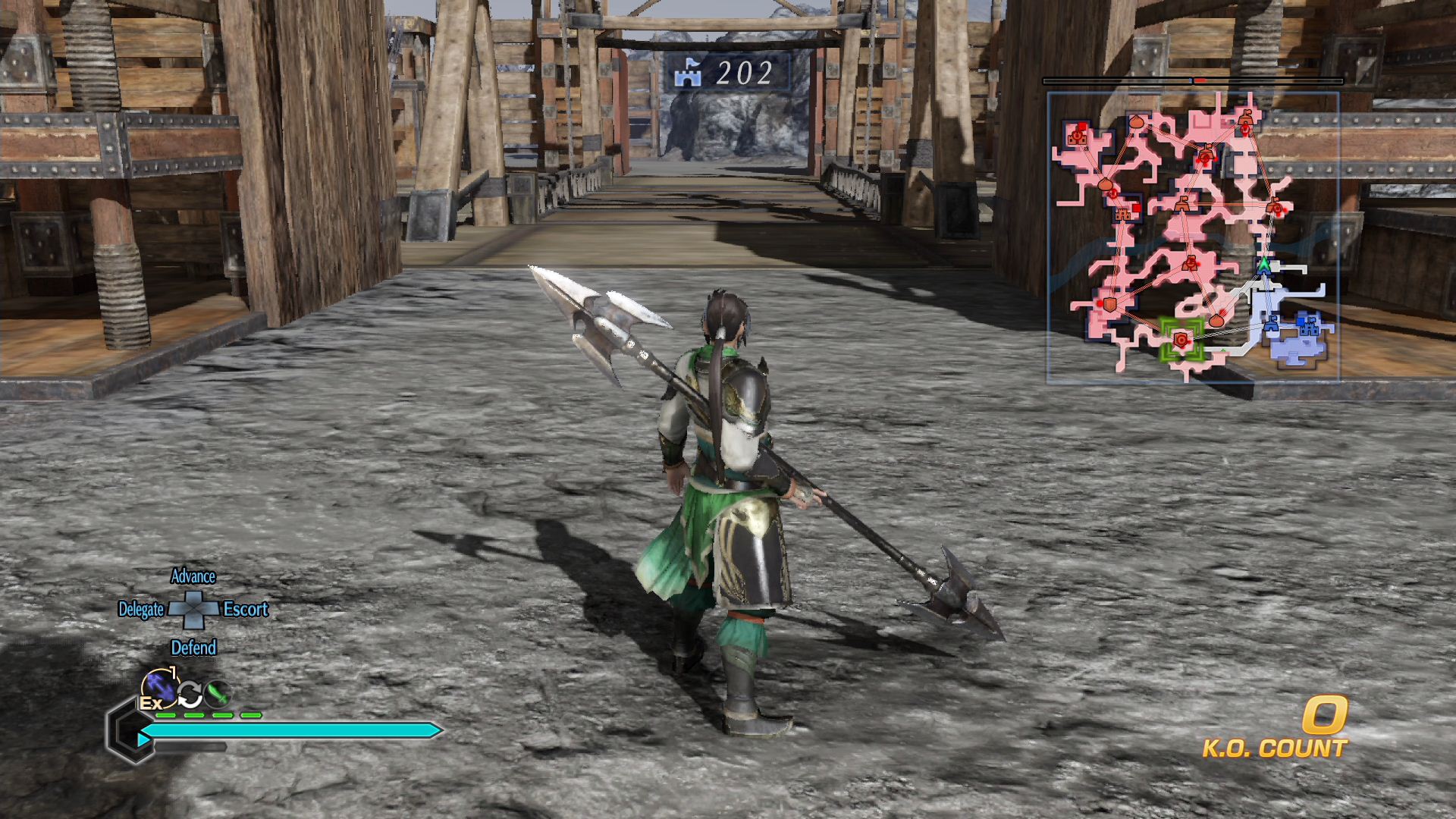 No one is buying a Dynasty Warriors title to marvel at the visuals but it’s a shame that the developers did not even made an effort to try. This is different from Dead or Alive 5: Last Round which offered virtually no improvement on the PS4/Xbox One compared to the PS3/Xbox 360 versions. That was still a relatively good looking game. Dynasty Warriors 8: Empires looks bland on every platform, specially the Xbox One version which is a mere after thought.

There are several issues with it in terms of gameplay, especially due to the sheer repetitive nature of combat. Suffice to say that such issues might have been easier to deal with if the game actually looked good. Xbox One users are getting the worst of it because of lower grade anti-aliasing, poor texture quality, an under developed lighting system and prominent shadow dithering on top of the various other issues.

The PS4 version is the better looking of the two but that doesn’t mean its setting the bar for this generation. If you receive this game for free or better yet if someone pays you to take it away, you can rest assured of mindless combat to while away the time (and hopefully consider better games to play). What you won’t be assured of is a good looking experience to justify purchasing that spiffy new eight-gen console.