The sign of a good workout is that you ache like hell the next morning, with pain coming from muscles you never knew you had. EA Sports Active 2 certainly provides a good workout! The old adage what doesn’t kill you makes you stronger is well suited for the sequel to the acclaimed 2009 Wii game – although during our playtest, I wasn’t so sure.

EA Sports Active 2 should not really be classed as a game but a fitness title, aimed at both beginners and diehard exercise fanatics. Although it’s available for the Wii, PS3 and Xbox 360 (the editions aimed at Sony and Nintendo’s machines make use of wireless motion sensors in leg and arm straps), we thought we’d take the 360’s Kinect version out for a run to see whether Microsoft’s motion control was up to the task. 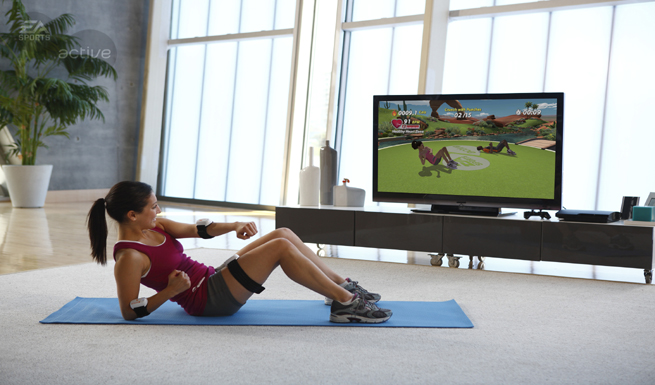 There are plenty of exercises to keep you going

There are over 70 exercises and activities of varying difficulty available – although the non-360 versions apparently boast a few more. Workouts last from a few minutes to almost an hour, with all the requisite lunges, squats and stretches making an appearance. More advanced exercises include floor work, mountain biking (!), football skills, dodgeball and boxing to boost your cardio. Alternatively, you can commit to a longer term program designed by trainers that will keep you puffing for three or nine weeks.

The size of the box suggests that you’re getting something special to justify the slightly inflated pricetag. And you’d be right. Inside, you’ll find a heart rate monitor and a tension strip to make those exercises a little more taxing. Once you’ve synced your console with the monitor and strapped it on to your arm, your heart rate pops up onscreen and fluctuates as each workout progresses keeping you constantly updated – a nice touch that really makes you feel like you’re interacting with the title. The calories you’ve burned also appear, alongside a timer so you can keep tabs on your progress. Fathoming how to assemble the tension strip is a little more taxing as no instructions are included, but provided you tie the knots tight enough it provides a sturdy accessory.

The main menu shows an array of options, although this can be slightly tricky to negotiate if you rely solely on the Kinect sensor – my recommendation is to keep a conventional controller handy. From this screen, you can dive straight into a preset routine or get one specially generated for you. If you don’t fancy doing certain exercises you can deselect them as required. Another section whisks you off to your nutrition guide and diary, which keeps track of your efforts. There’s also the option to head online to check progress and share results with friends for a bit of healthy competition.

First up, you need to build your profile and create your onscreen persona – everything from weight and height to name, hair colour and build. You can even customise your clothing if you so desire and select whether to be nagged/mentored by a male or female trainer. After watching simple tutorials, your trainer talks you through each exercise. It’s all set against subtle background music and takes place in a variety of outdoor settings akin to those fitness programmes you see on the television. Initially it’s all very calming and relaxing… until the gentle warm up exercises are over and the real work begins. I guarantee you’ll quickly build up a sweat and feel the burn – which at least goes someway to justify your purchase; EA Sports Active 2 actually seems to work. 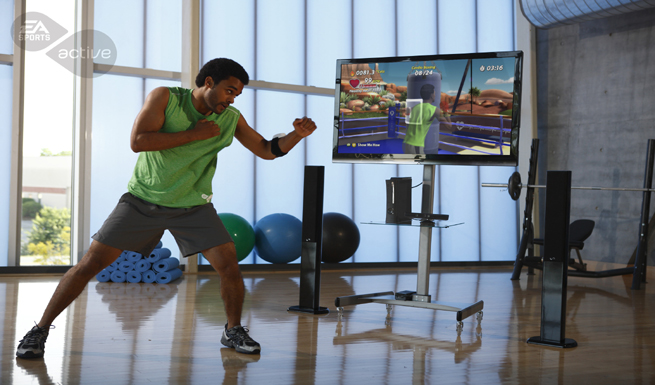 The workouts get tougher

The software uses the Kinect motion controller fairly effectively although you need heaps of space in your living room. There are occasions where lag is noticeable and the sensor fails to pick up movement (it doesn’t seem as accurate or sensitive as Your Shape: Fitness Evolved, for example).There’s also a frustrating glitch that sometimes sees your workout suddenly interrupted and the menu screen pop up for no apparent reason – although forums suggest that turning off the voice recognition solves this. As mentioned above, it’s also far easier to dispense with the arm waving when trying to negotiate the multitude of menus and refer back to the conventional controller – a bit of a shame considering Kinect’s “you are the controller” claim. Saying that though, none of these issues should be a deal breaker.

There are a multitude of sports and fitness titles that have already made their way on to Kinect but EA Sports Active 2 is certainly one of the more comprehensive packages. The cost is slightly heftier than your typical outlay for a new release, but for what amounts to little more than a month’s gym membership, it’s certainly worth a try. If you can muster the energy and enthusiasm to spare a few minutes on a regular basis, I’ve no doubt you’ll quickly see positive results. Me? I’m still aching!

With plenty of exercises to keep you going, it certainly provides a good workout. Whether you're short of time or want to commit to a program lasting several weeks, this will help to get you fitter. Resistance band and heart rate monitor are welcome additions.

Menu screen is clunky and the Kinect version we tested occasionally fails to pick up your movements. Floor and boxing exercises don't work too well. Game pauses occasionally for no reason.

Final Verdict:
GOOD
EA returns with the second installment of its Sports Active series - guaranteed to get you sweating and get muscles working that you never knew you had!
A copy of this game was provided by Developer/Publisher/Distributor/PR Agency for review purposes. Click here to know more about our Reviews Policy.