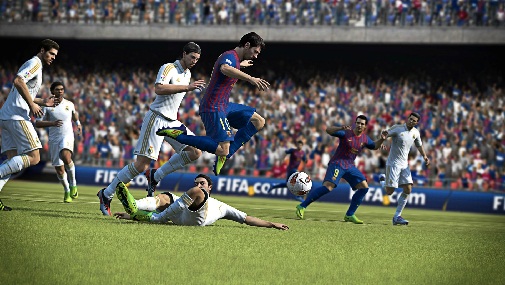 Executive producer of the FIFA series, David Rutter, believes the FIFA series has grown from being a “gimmick, marketing-lead video game” to a ” true, gameplay-oriented video game where there’s this brilliant experience to be had.”

When asked in an interview with CVG how the development team tries to convert football fans into FIFA players, Rutter said- “We talk about this all the time – can there be people who own a console, like football, but haven’t got FIFA. Undoubtedly there are and we’re like, ‘well… why aren’t they playing it?'”

He carried on- “I think there are still people that look back on the history of the FIFA video game and don’t realise that we’ve been through this massive transformation from this gimmick, marketing-lead video game to a true, gameplay-oriented video game where there’s this brilliant experience to be had.”

“Or maybe it’s just that they love football and they’d rather spend their free time when they’re not watching football matches doing something else and shooting people – I don’t really know,” he said, taking a jab at people who usually play Call of Duty over FIFA, as he did earlier in the interview as well.

“The fact of the matter is we just want people to be happy when they buy our game and play it all year long, and we’re very, very lucky that we’re probably one of a handful of games where when people buy it, they literally play it until the next one comes along,” he continued. “The fact that we’re doing that every year is pretty remarkable.”

FIFA 13 is due out later this year, but it hasn’t officially been announced yet, so stay tuned for an official reveal in the coming weeks.