Earth Defense Force 5 is probably one of the dumbest games I’ve ever played. I mean no offense by that and I’m sure if you told the creators the same thing, they’d be brimming with pride. Because this game has a tone and that tone is one of a 1960’s science fiction B-movie. Everything is this game is absurd, from the creatures you shoot up to the cliche dialogue spouted by your teammates. Your team’s chatter will be a constant source of smiles and you’ll grow to love the dumb lugs despite yourself. When you’re going toe-to-toe with 3-story tall frog creature aliens with guns and you have constant radio chatter talking exclaiming how terrifying is that they “look just like humans,” you just have to raise an eyebrow.

And there are plenty of these aliens to shoot up. From giant ants to giant spiders to the aforementioned giant frogs, there’s tons of giant enemies to splatter with all sorts of weaponry. These enemies always come in bulk and you’ll almost constantly be overrun during your entire playthrough.

Let’s get this out of the way upfront: the game is not a good-looking game. Everything is decidedly low-textured and the animation for most of the creatures is lacking, with memories of the PS2 popping up from time to time. However, this acts as a trade-off for quantity over quality. Since the game doesn’t use very graphically-intensive creatures, it can fit an insane amount of them onscreen at one time. So while Earth Defense Force 5 isn’t an especially nice title to look at, its main focus is on function. In this case, I think that’s a more than acceptable compromise. After all, the entire game is focused on an invading race of monsters. It would be pretty silly to have only a handful of monsters attack at a time just to make them look pretty. 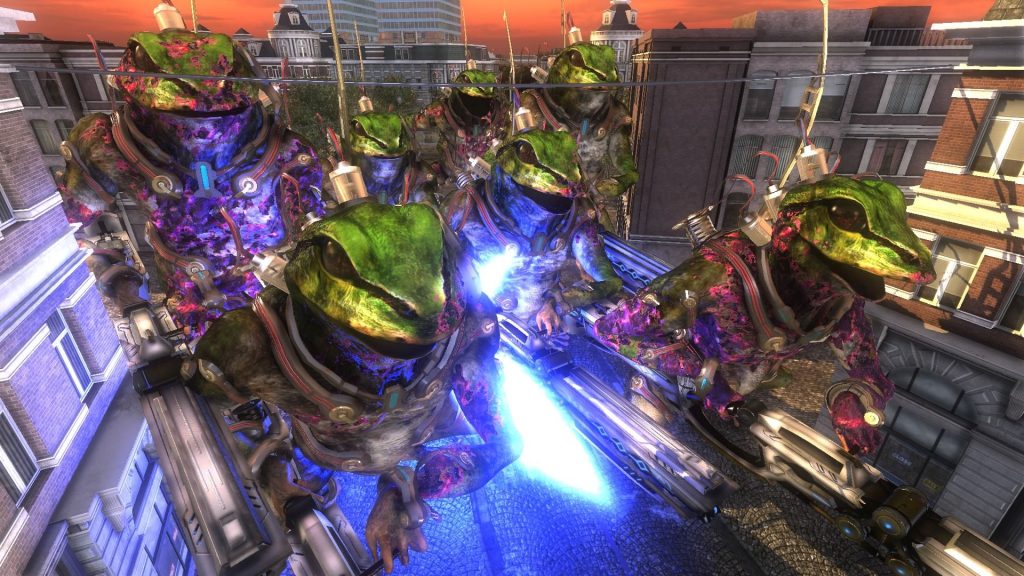 "From giant ants to giant spiders to the aforementioned giant frogs, there’s tons of giant enemies to splatter with all sorts of weaponry."

There is a story in this game, for what it’s worth. You start the game as a regular civilian going about your business in some underground military base when monsters invade. You get thrown into the thick of it and over the course of the game, you start to piece it all together. What are these hostile creatures? Where did they come from? All of that gunk. But here’s the thing: all that doesn’t matter. The story is very secondary to the gameplay and the game knows this. The story exists for not much more than a few funny one-liners and a vague reason to go from mission to mission. There’s very little effort put forward into making the story compelling. The compelling part is all of the bugs and UFOs around that need a few holes put into them. The good news is that putting those holes into them is really fun and more than makes up for the absence of storytelling.

There’s a few classes that you can go through this game as. Up first is the Ranger. This is your standard soldier and what I think a lot of players will gravitate towards for a good chunk of your playthrough. This is the only class that can sprint, although you probably won’t be using it too much since it’s cumbersome to use in the middle of combat. Soldier-man can carry two of a wide variety of weaponry, from assault rifles to sniper rifles to missile launchers. He also has a equipment slot that you can use as a buff or to call in vehicles. This is the basic way to experience Earth Defense Force 5 but that doesn’t make it bad at all. On the contrary, getting to try out all of the weapon combinations is a great time and it helps you find your own style of bug-squashing.

The Wing Diver is up next. These girls provide a very unique experience compared to their boots-on-the-ground brothers. This class can fly and zip all around and their gameplay style relies on meter management. The Wing Diver’s jetpack as well as weapons are tied to a central cool-down that you need to keep an eye on. If you let this bar bottom out, you’ll find yourself not only being unable to fly, but also unable to even use your weapons, usually with ants the sizes of whales charging straight at you. With this big risk comes a great freedom though because Wing Divers are incredibly fun. The Wing Diver’s weapons encourage either rushing your opponents down or leading a target and lobbing shots at them. Being able to fly around for spurts and rain down damage on your enemies is an intoxicating feeling. 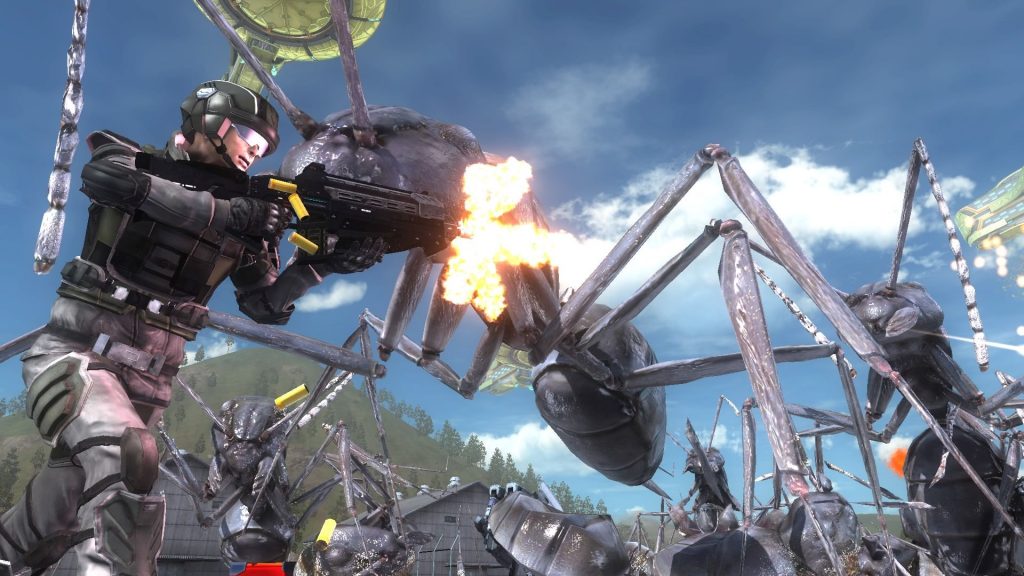 "Like I mentioned briefly before, there’s multiplayer and it is highly recommended for anyone looking for a good time."

The Air Raider is the support class of Earth Defense Force 5. He comes equipped with plenty of gadgets based around keeping teammates alive, whether it be health stations or shields. He can also place down turrets and call in a wide range of vehicles. He can also call in air strikes to decimate wide swathes of enemies. An Air Raider has so many options available and has a responsibility to use them wisely. On higher difficulties, the difference between victory and becoming spider soup is smart play with equipment like the health stations and turrets. When playing with others, Air Raiders are essential parts of the team and usually end up setting the pace for the rest of the team to follow.

And for players who really want to shake things up, there’s the Fencer class. These big bruisers come at enemies in powered exoskeletons and use oversized weapons, melee strikes, and a shield. This class takes a little bit of adjusting to use since they are so cumbersome to move around and can easily get overrun by enemies if they’re out of position and have to reload. But once you get into a good rhythm, this class can decimate enemy forces. Ripping into ants with your minigun before switching over to your melee staff is exhilarating and feels like some kind of destructive dance once you pull it off. This class is for players who want to feel safe running head-first into enemy forces without any promise of back-up.

Like I mentioned briefly before, there’s multiplayer and it is highly recommended for anyone looking for a good time. Online multiplayer gives you lobbies where you can select the exact type of experience you want and join in with up to three other players. This is where the synergies of the classes really come together. Holding off a frenzied horde next to an Air Raider, his health stations destroyed and his turrets close to it, while you both wait for an air strike to come down and save you is a rush. Then once your Wing Diver teammate comes in from the flank to take the enemy group by surprise, the relief is palpable. There’s also split-screen play, where you and a friend can both select your individual class and loadouts. In an age where so many titles forgo split-screen functionality, it’s great to see a title like Earth Defense Force 5 keep the tradition strong and it ends up being a stronger package for it.

The game has a few issues though. Although you can go through most of the missions with no issues, there are some big battles where the frames get dropped hard. This choppy feeling is unfortunate but it happens infrequently enough where its negligible. During battle, you can oftentimes get overwhelmed by a large group and your entire view can be taken up by enemies. This usually ends up leading to your death and it feels frustrating when the enemies absolutely swarm you, as fitting as it is feels for the type of game this is. Dead bodies of enemies also ragdoll everywhere and, while it is funny, it ends up cluttering the screen and making it hard to discern what’s dead and what still needs shooting. 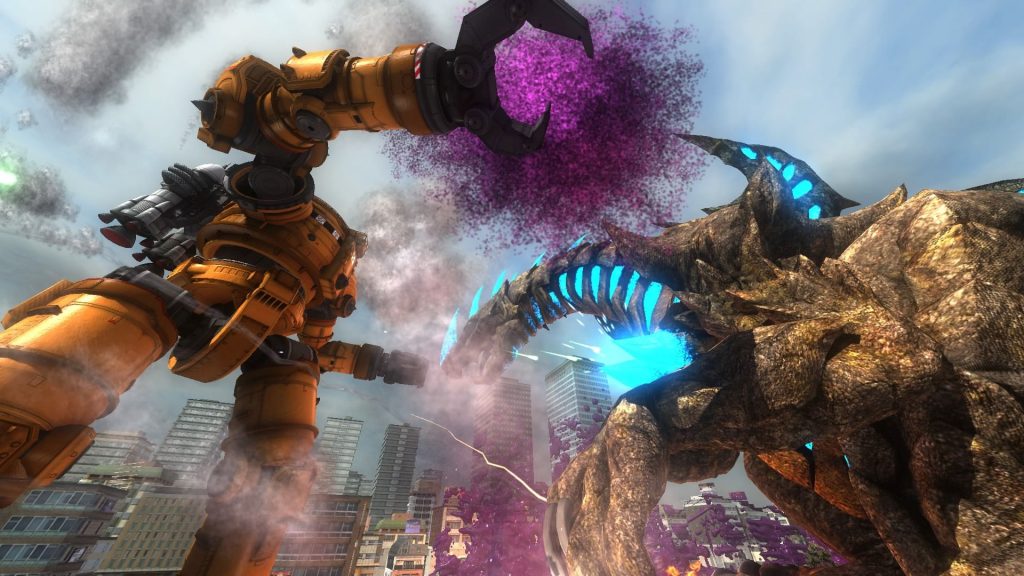 "Dead bodies of enemies also ragdoll everywhere and, while it is funny, it ends up cluttering the screen and making it hard to discern what’s dead and what still needs shooting."

Earth Defense Force 5 is a fun title that doesn’t aim for anything more than that. It sets out to give you many monsters to shoot and many weapons with which to shoot them. In that estimation, it succeeds. If the idea of doing this over and over again with the only real progression coming from new weapons gained at the end of each mission, then this is the game for you. If you want more of a reason to shoot said monsters, this game won’t provide that for you. But if you can get into the campy B-movie tone of it all and just turn off your brain for some alien-squashing action, you’ll find yourself having a great time.

Ugly Graphics, Not much narrative to drive you along, Framerate issues.

Final Verdict:
GOOD
Earth Defense Force 5 is a great game for folks who don’t need any good reason for just wanting to blow up a lot of bugs with a lot of guns.
A copy of this game was provided by Developer/Publisher/Distributor/PR Agency for review purposes. Click here to know more about our Reviews Policy.