Evil West – 10 New Details You Need To Know About

Here's everything you should know about Flying Wild Hog and Focus Entertainment's upcoming action game.

Nothing else can quench the thirst for brutal combat the way a good action game can, and though there’s plenty of options in that area for those looking for one, you can’t ever have too much of a good thing. Whether or not developer Flying Wild Hog and publisher Focus Entertainment’s upcoming Evil West ends up being good obviously remains to be seen, but based on everything that we’ve seen and heard of it so far, it does seem like it’s shaping up to be a promising experience. The game will be out for PC and consoles on November 22, and ahead of its launch, here, we’re going to take a look at a few of its key details that you should know about it before you dive into its offerings.

Perhaps the single most intriguing elements of Evil West – certainly one that instantly catches the eye – is its setting- which isn’t surprising, given that the game is named after it. Evil West takes the Wild West setting, which is a fascinating one in and of itself, and adds elements of the occult. Dark fantasy and the American Frontier have often combined in stories to great effect, and that’s exactly what developer Flying Wild Hog seems to be going for here. There are many details on the game’s world that we obviously don’t know much about just yet, but the prospect of a Wild West setting that blends its seemingly ordinary elements with folklore, myths, and legends is an exciting one. 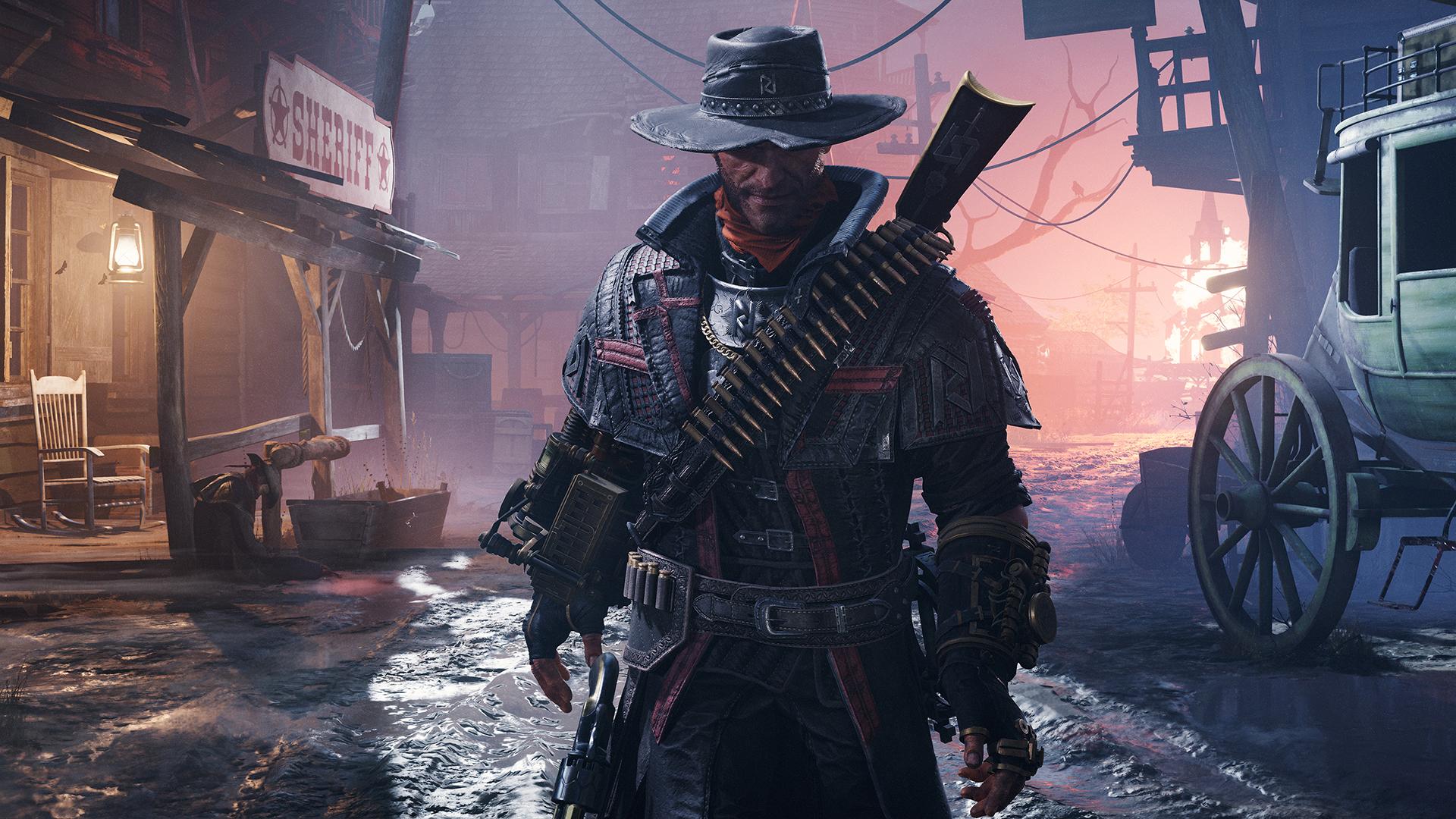 And what exactly is the tale that Evil West is going to spin in its unique setting? It revolves around the Sanguisuge, which are vampiric monsters that have hidden in the shadows for a long time, but are now beginning to reawaken. The American Frontier finds itself faced with their deadly threat- but it’s not without a line of defense. Since the early 1700s, the Rentier Institute has specialized in finding and killing these monsters and protecting the world from their terrifying powers. You play as Jesse Rentier, one of the last agents of the institution, and the son of its leader, William Rentier. With the Sanguisuge rising up, it falls to you to turn into what the developers are calling “a Wild West Superhero” and save the United States. 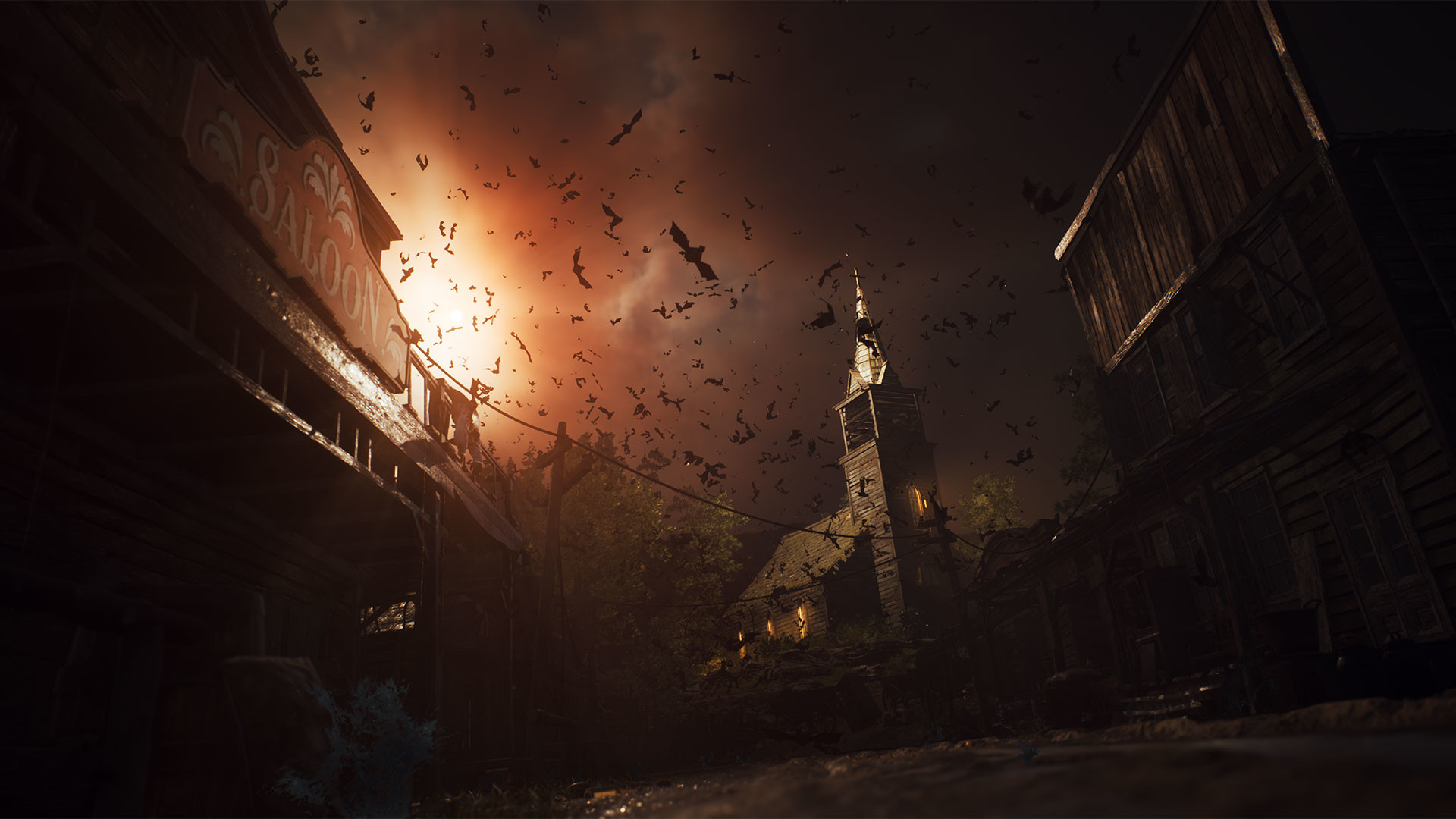 Evil West is going to be a linear game, but even though open world exploration doesn’t seem to be on offer here, it still seems like the game is going to take players to some interesting locations. Abandoned mines, old frontier towns, sawmills, massive railway bridges, and more- there’s an impressive variety of environments that have been shown off in what we’ve seen of the game so far. As seems to be the case with the entire game at large, it very much seems like Evil West is going to take familiar Wild West locations and sprinkle in elements of dark fantasy to lend them a unique flavour. How successfully it pulls that off remains to be seen, but it’s certainly piqued our curiosity. 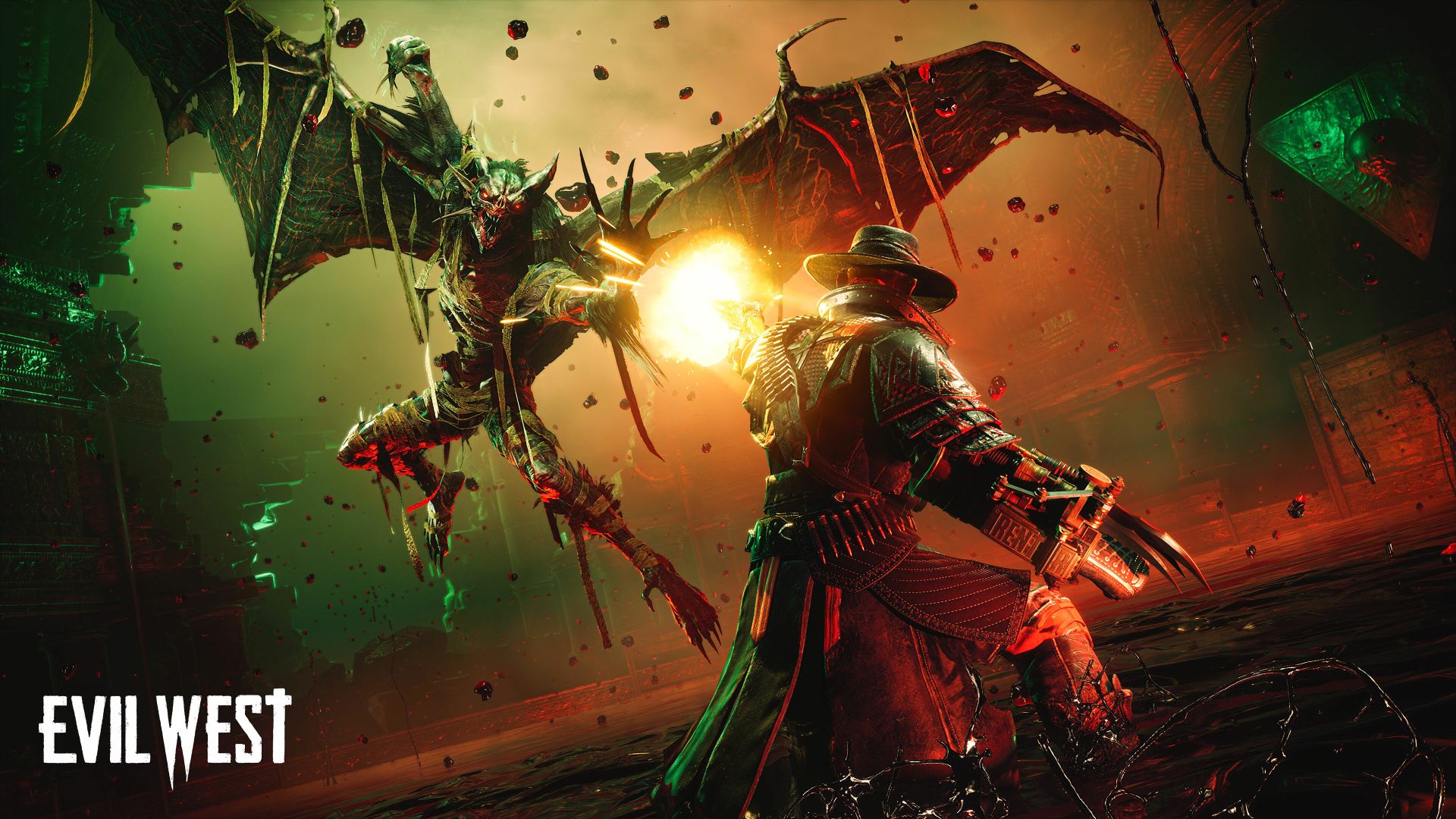 Evil West’s combat is another one of its most intriguing aspects, largely because it seems to be crafting a experience that’s taking a lot of cues from the older action games of the 2000s- like the older God of War games, for instance (though there’s plenty other similar examples you can easily think of). Melee and third person shooting both seem to be core components here, and mixing and matching the two together, using different weapons in combination, and finding ways to brutally eviscerate foes will form the backbone of the experience. 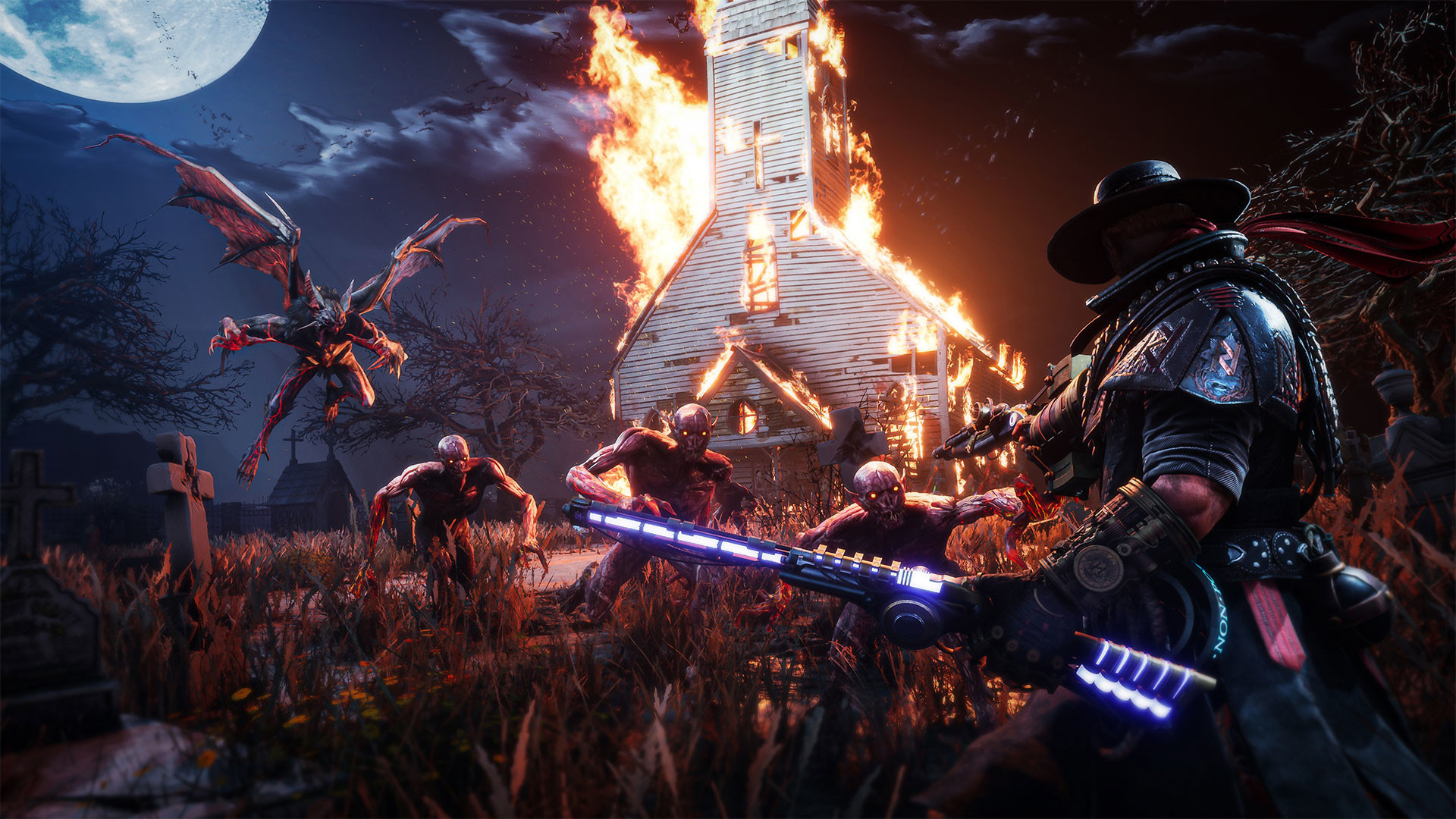 Evil West will give players a variety of weapons and hunting tools with which to hunt monsters. Where melee combat is concerned, Jesse’s gauntlet will be your go-to weapon. In addition to doling out plenty of damage, the gauntlet is also imbued with electrical abilities, with which you can not only stun foes, but even burn them to a crisp. In addition to that, you’ll have a revolver, a sniper for long-range attacks that dal greater damage, and the Scorcher, which is a essentially a flamethrower. Stunning or staggering foes will also open them up for special finishing moves, which is yet another classic genre staple that Evil West is making use of. 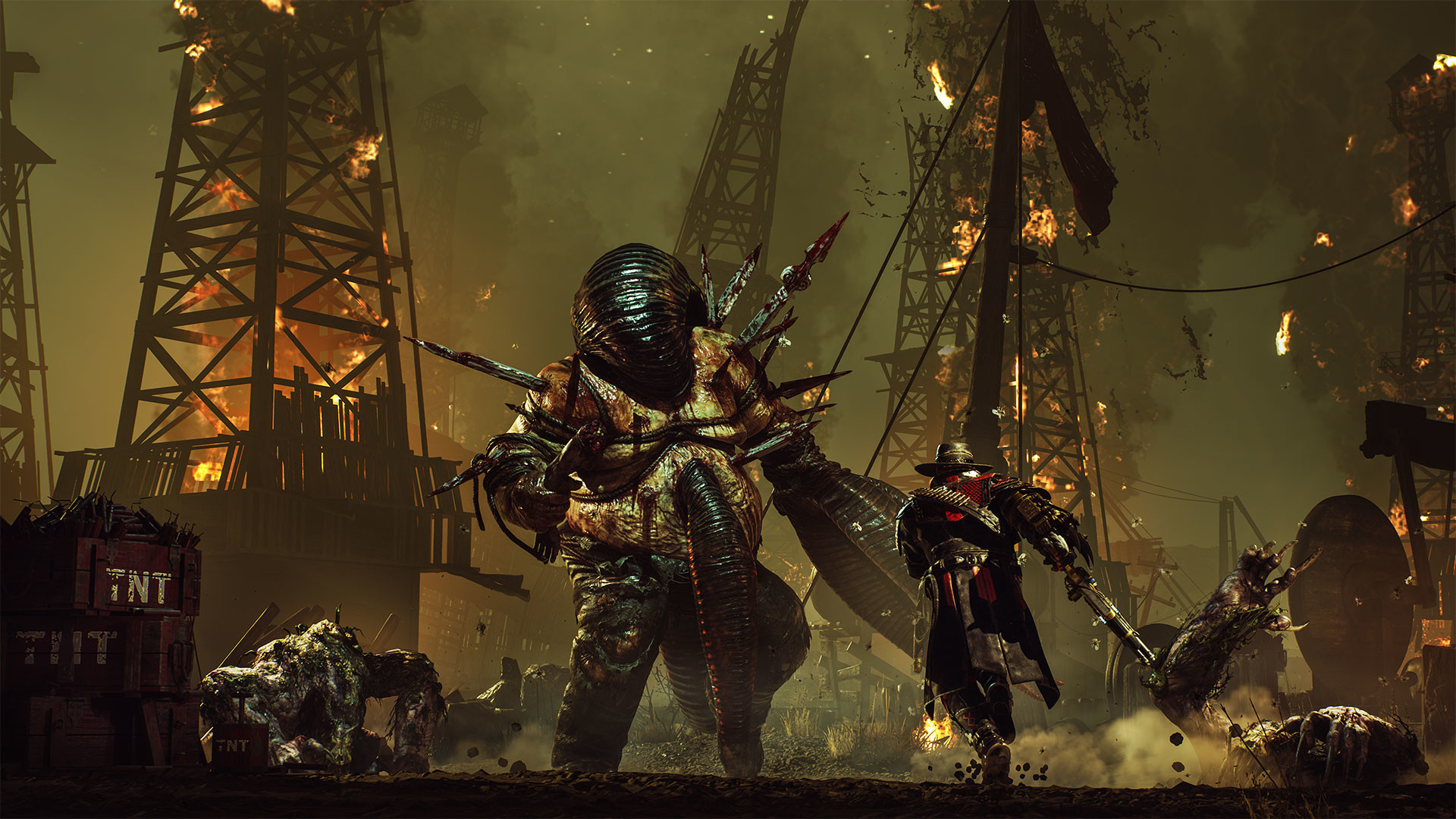 Alongside your arsenal of weapons and hunting tools, you’re also going to have access to other strategies to take enemies on in Evil West, even if they serve as ancillary methods at best. For instance, it looks like there will be a decent amount of environmental interactions, where using things around you to your advantage will reap rewards during tense encounters. You have your classic exploding barrels, of course, but just as another example, if you see spike traps around you, you can try and kick or shove enemies into them for some pretty visceral kills. 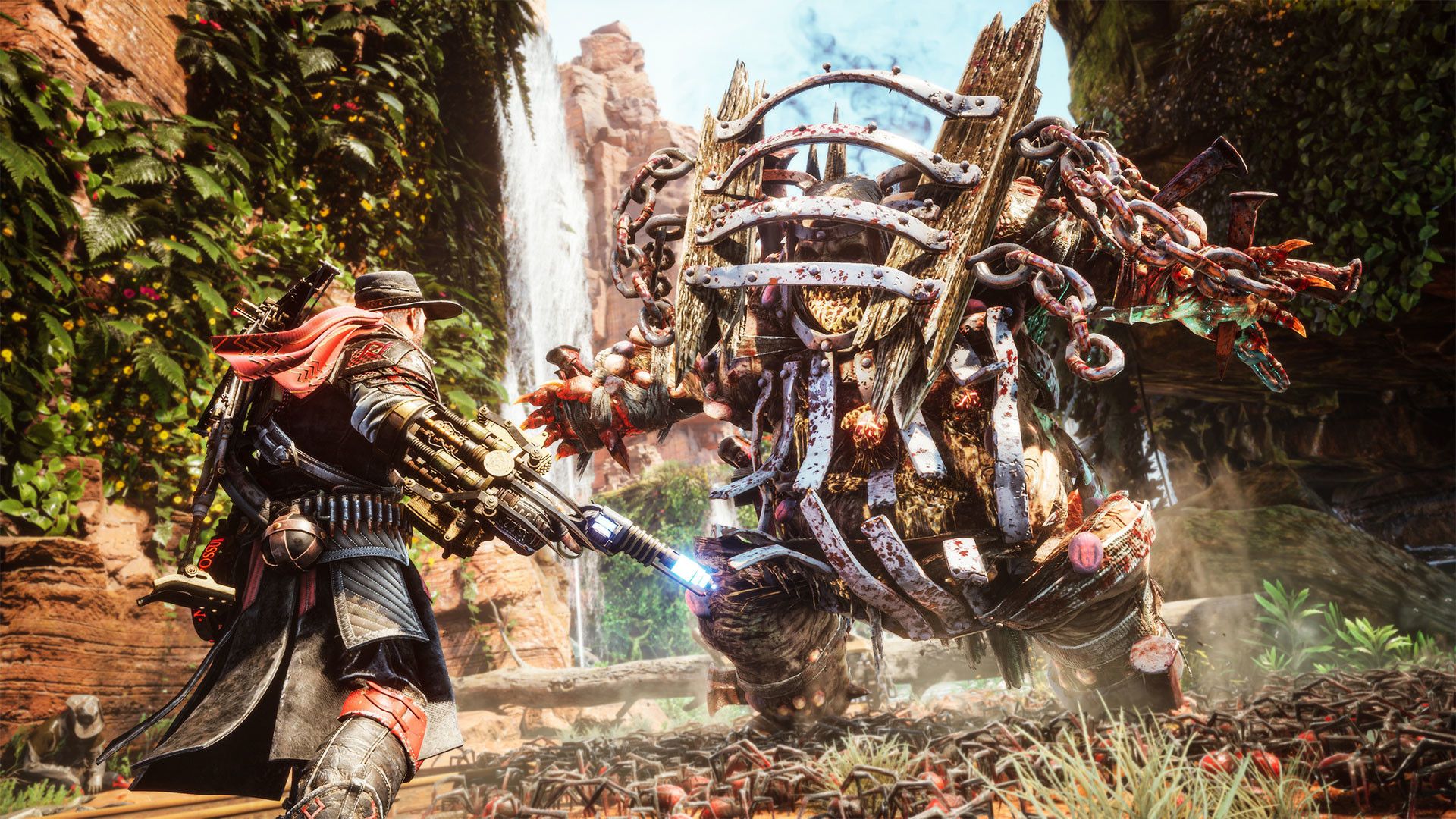 Enemy variety tends to be a crucial aspect of action titles, so what can we expect from Evil West on that front? Some pretty interesting things, it seems. Regular vampires hiding in plain sight is enough of a threat as it is, but you’ll also be locking horns with other monsters who’re much more overt in their- well, monstrosity. There’s Boo-Hags, who’re not very intelligent, but can swipe at you with their massive claws and tend to come at their prey in packs. Then there are Nagals, wolf-like creatures that are incredibly fast and can even increase their attacking prowess by howling loudly. Leechers, meanwhile, are massive brutes that come equipped with giant, spiked shields. Then there are the bat-like Highborns, which are the most powerful Sanguisuge species out there, and can regenerate their health, use their wings to their advantage in different ways, and deal deadly damage with their attacks. Evil West will, of course, also feature a number of boss fights that’ll see you going up against much more powerful and formidable foes, though understandably enough, Flying Wild Hog hasn’t revealed a great deal on that front. 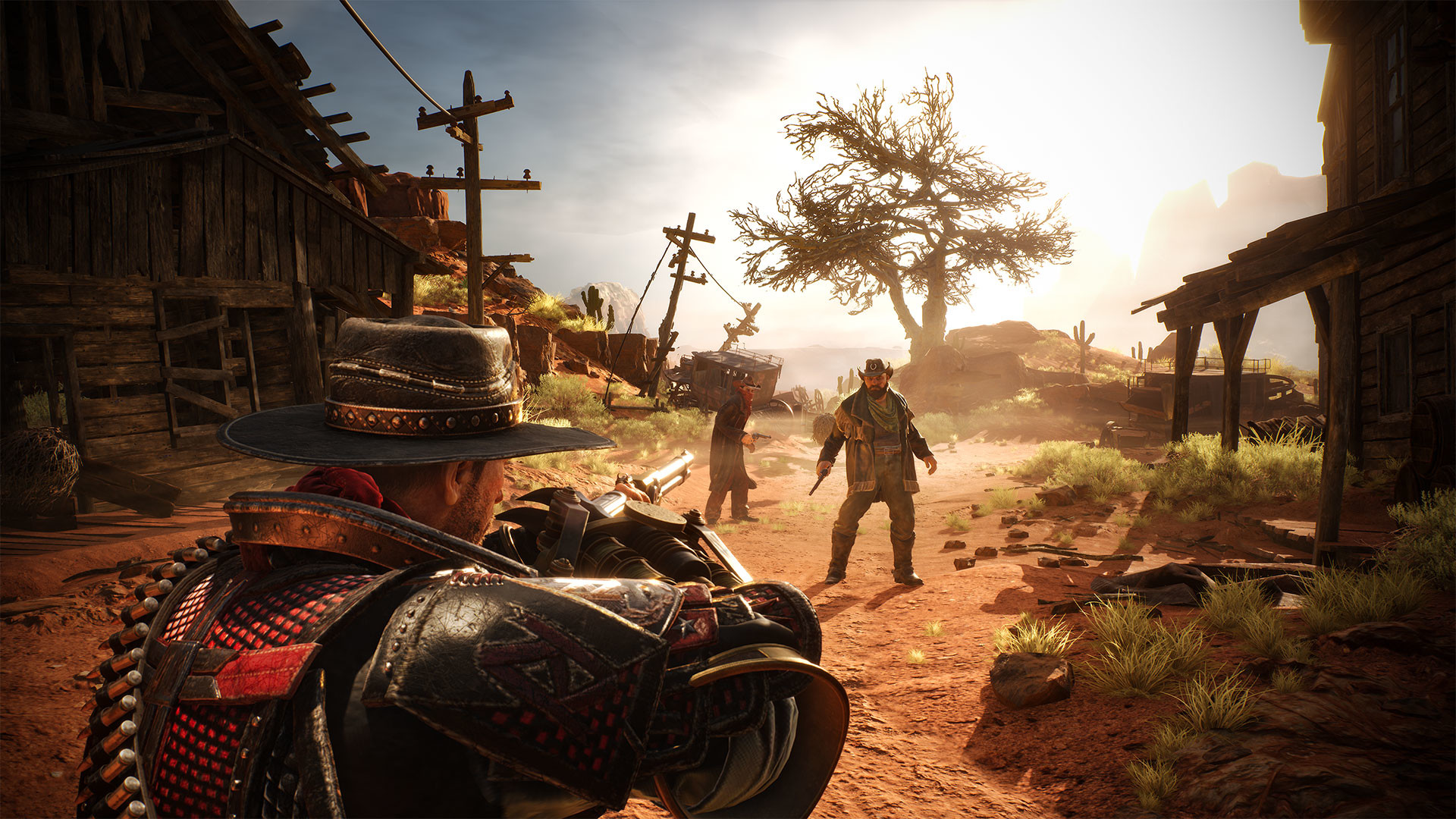 Some light progression mechanics will also play a role in Evil West. Leveling up will unlock new skills, while getting access to new perks with different advantages will also allow players to tweak their play style to suit their needs. Meanwhile, upgrades will also be available for your weapons and tools, though exactly how extensive these mechanics will be remains to be seen. 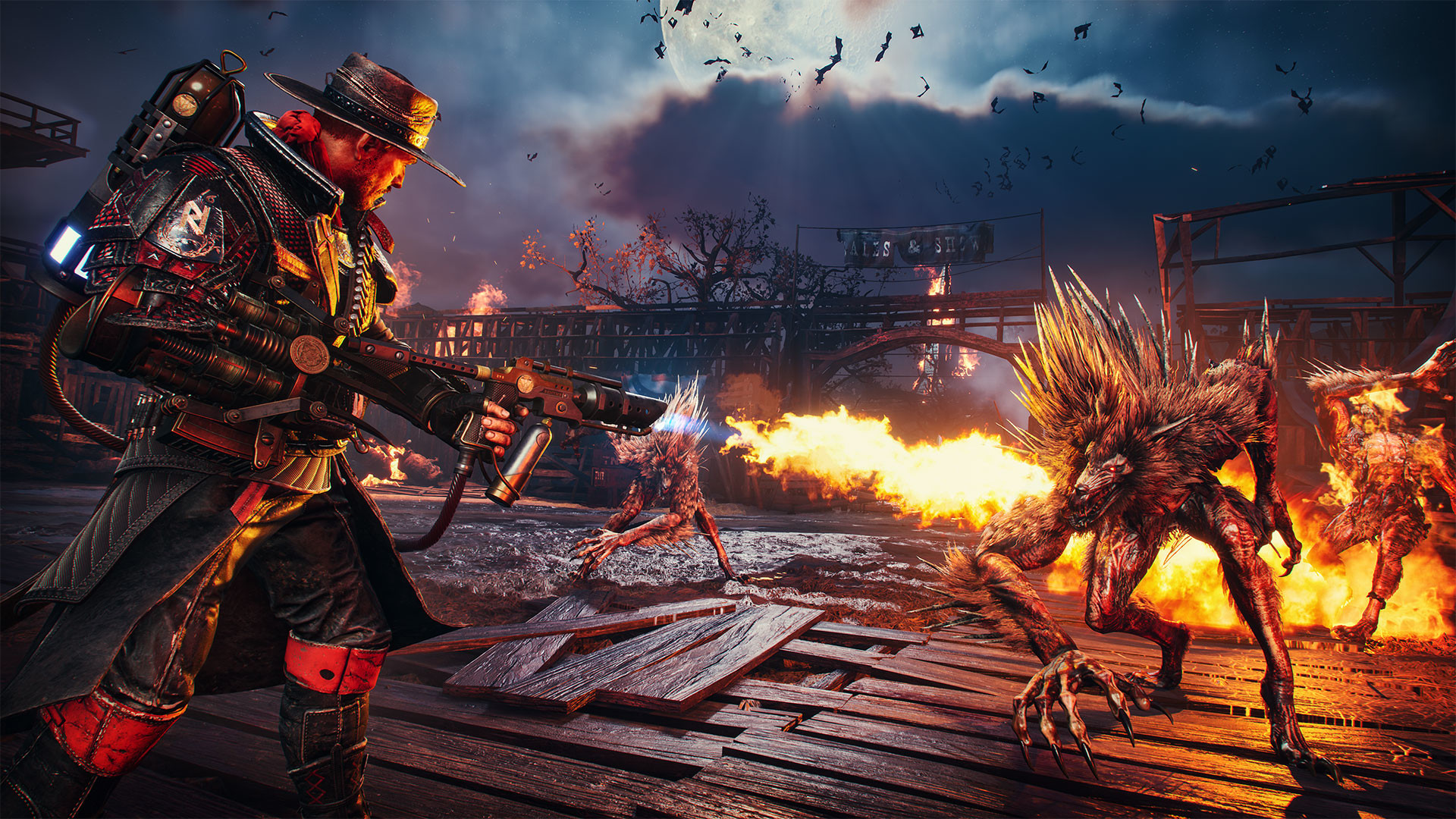 Flying Wild Hog and Focus Entertainment have emphasized quite heavily (and more than a few times) that Evil West will be a narrative-driven experience- which, of course, means that for those who’re keen to pay attention to that side of things will obviously have the option to play through the entire game solo if they want. If, however, you’re looking to take someone along for the ride, you will have that option as well, with the developers having confirmed that the entirety of Evil West will be playable co-op with another player as well. 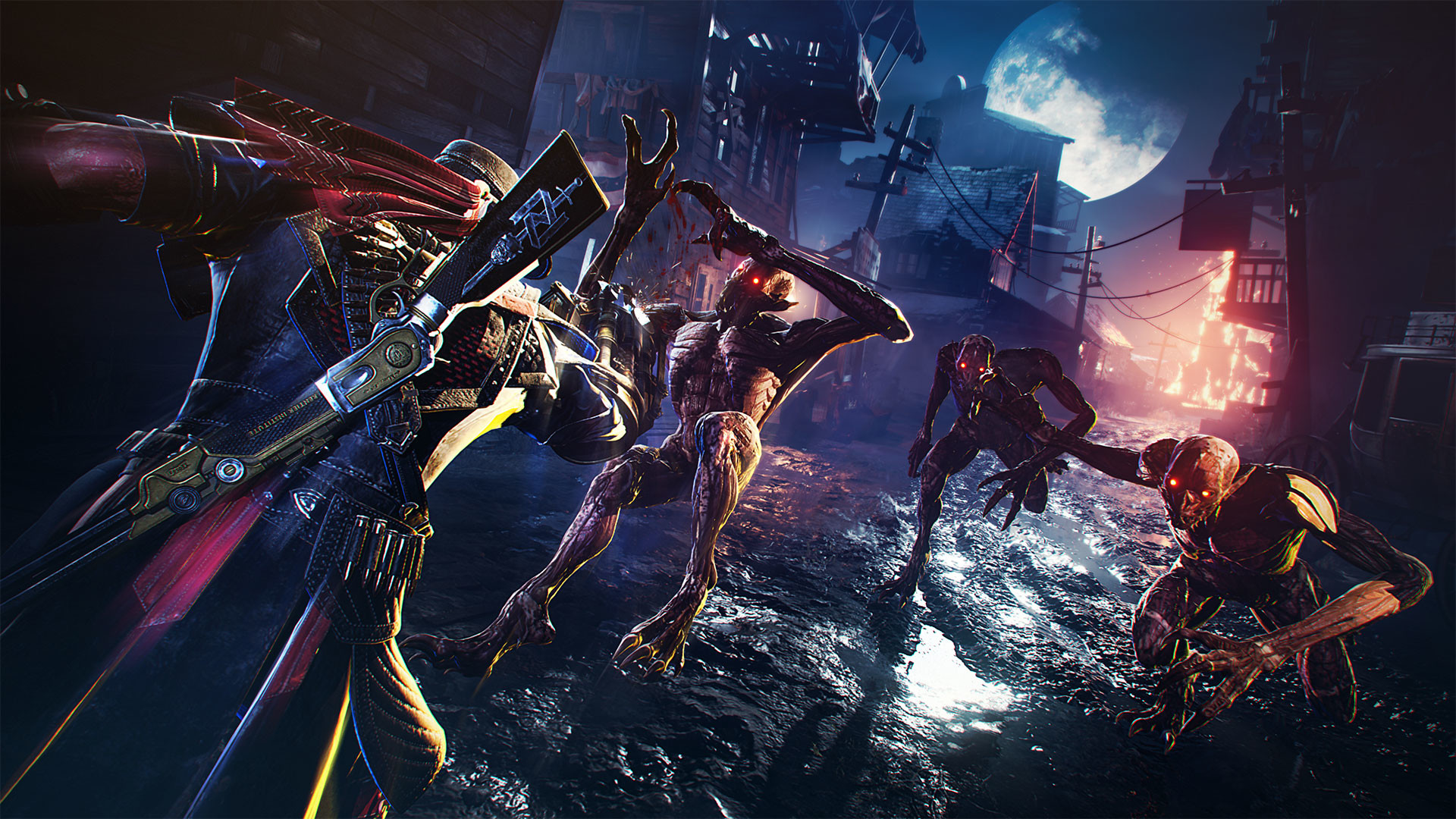 Evil West is very much what you’d call a “AA” game, and sure enough, it’ll launch at a price that’ll reflect its nature. On PS5, Xbox Series X/S, PS4, Xbox One, and PC, it will retail for a price of $49.99. In a world where an increasing number of games is opting to launch for higher price points, the prospect of a linear, story-driven game offering old-school action gameplay is a comforting on. Our only hope is it lives up to expectations.