Flying Wild Hog's latest is about hunting vampires in the Weird Wild West. It's available for Xbox One, Xbox Series X/S, PS4, PS5, and PC.

Focus Entertainment and Flying Wild Hog have revealed the minimum and recommended requirements for Evil West, and they're not too demanding.

Evil West – 10 New Details You Need To Know About

Here's everything you should know about Flying Wild Hog and Focus Entertainment's upcoming action game.

Evil West Has Gone Gold Ahead of November Launch 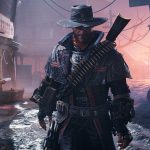