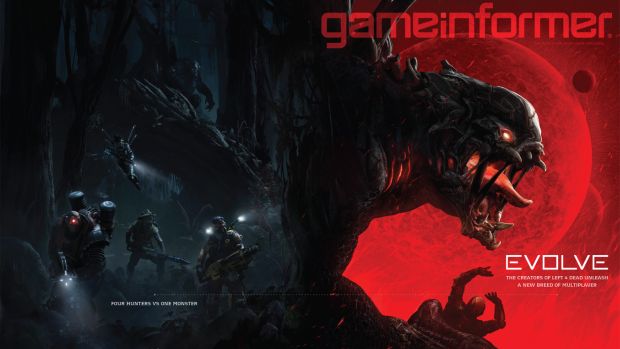 Game Informer finally revealed its next-gen exclusive game cover: Turtle Rock Studios’ Evolve. Some of you will know Turtle Rock as the original developer of Left 4 Dead. Now that the Evolve IP belongs to 2K Games – after THQ’s bankruptcy – Evolve will be arriving for the PS4, Xbox One and PC.

The game will focus on multiplayer as four alien hunters, each with their own abilities and items, must face off against a single monster controlled by a fifth player. The monster may be alone but he grows more powerful and larger over time. The idea is to mix competitive and cooperative play together, though GI promises more details on the hunters, monster, equipment and much more for the game in its exclusive 12 page look for this month.

Are you excited for Evolve, especially considering the developer’s pedigree or is this more of a wait and watch deal? Let us know what you think in the comments below.