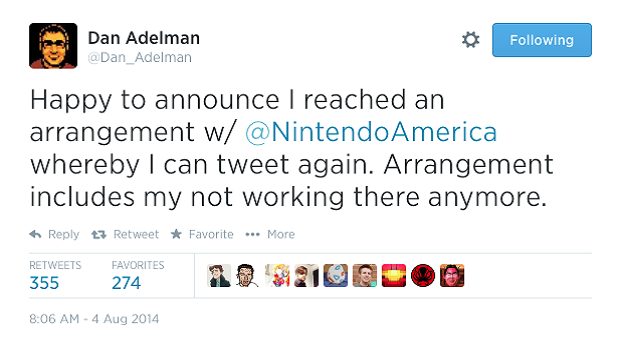 Dan Adelman headed Nintendo’s indie third party relations arm for a very long time. he is the reason that Nintendo changed its stance from its draconian policies of the WiiWare and DSiWare era, and why they became so indie friendly. He is the reason that Nintendo platforms continue to score so many sweet indie games now, including Retro City Rampage, Shovel Knight, SteamWorld Dig, and the upcoming Stealth Inc. 2.

But he left, earlier this year. And what is he doing now, that he has finally left Nintendo? Well… he’s working on an indie game that will be hitting the PC and PlayStation. He’s teaming up with the creator of Axiom Verge to work on a Metroidvania platformer game that is due to launch in 2015 PlayStation 4, PlayStation Vita, and PC.

Of course, this doesn’t mean anything as when Adelman quit Nintendo, he did state that he was on good terms with them, and that he would be working on multiple projects with indie game studios as their ‘business guy.’ And sure enough, he still is maintaining that there is more to come.

“Aside from the complete lack of any income, these two past months since I left my job have been amazing,” he said. “I’ve had lots of discussions with many developers about all kinds of interesting, quirky, wonderful stuff. These conversations are all in varying stages, and I’m sure I’ll be making some future announcements soon.”

Well, let’s hope the new game is great, and that together, they can make it a success. (Also, while you’re at it, Adelman, could you also pitch it to Nintendo? kthnxbai)