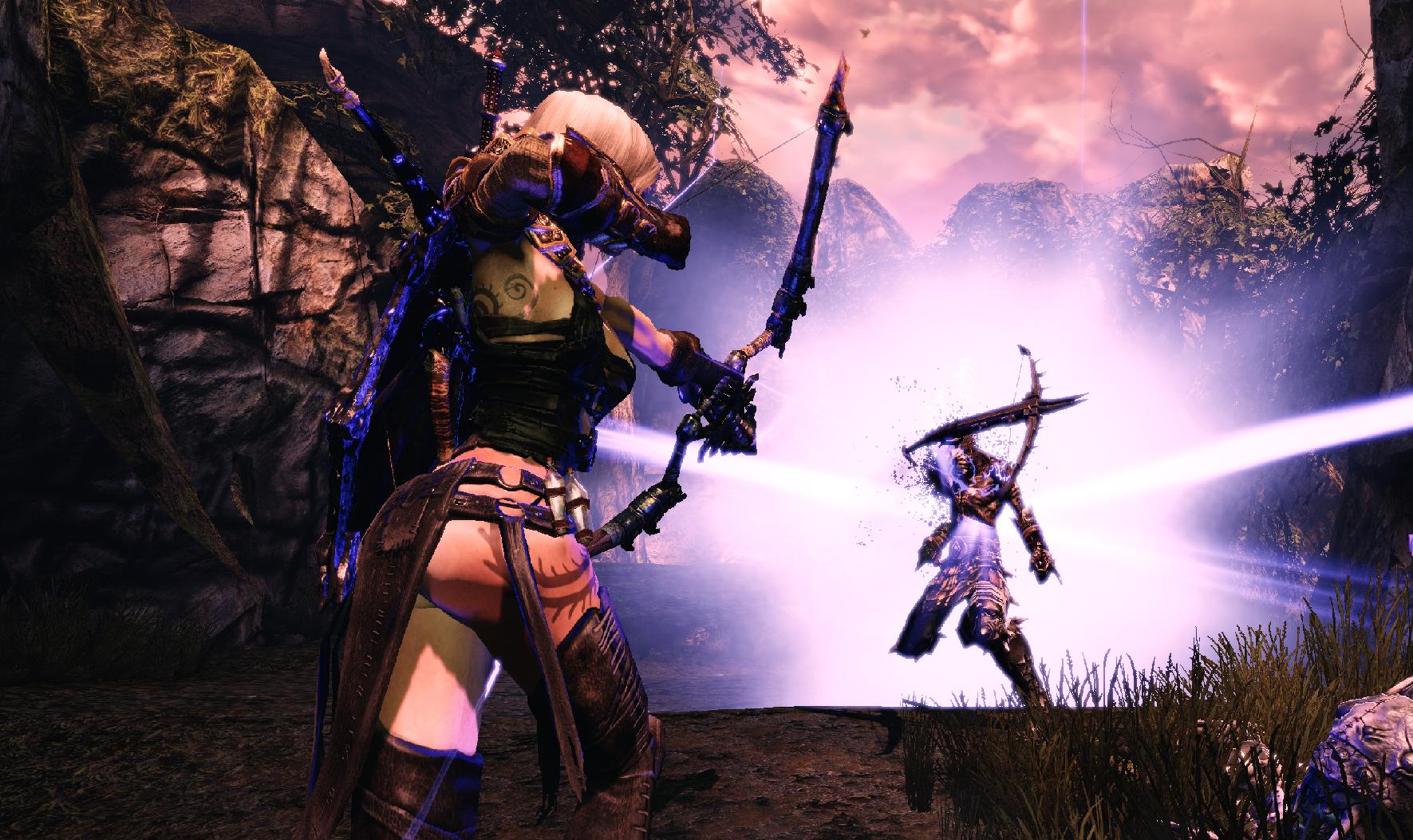 We recently got a chance to preview and play Hunted: The Demon’s Forge in NYC, my favorite place I might add for a Bethesda event.  The event is where we also got a chance to play as well as preview and interview with the development team for Brink.  We were super impressed with Hunted: The Demo’s Forge though and its co-op intense gameplay.  The game is a dark fantasy, action RPG that uses the Unreal engine to make this a graphically pleasant third-person game.  Playing as either E’lara, a ranged weapon expert, or Caddoc, a master swordsman, you must journey on a dark path to learn why innocent villagers have been disappearing in a world where the dark ages have brought evil creatures from the underground.

Starting off, we entered the tutorial part of the game where we learned the basics of the game.  There is a guidance system to keep you on track similar to the one in the Fable sequels, as with the click of the joystick shot out a gold trail through the air showing the way to next destination or current mission objective.  You can switch between ranged and melee weaponry with the touch of a button.  There is also a simple two button combo system making the gameplay mechanics very easy and user friendly even when it involves magic or spells which both characters can do.  The movement and cover system was very reminiscent of Gears of War in the best way possible.

Jumping out of the tutorial and into our first mission, was what put me and my partner together that I played with.  The nice thing about this 2 player co-op is that you don’t always have to play as a certain character, as the developers have creatively made obelisks every so often where you can switch to the other character as will your partner do to, if you both choose to.  I thought that aspect alone was a unique feature that really made the game more interesting especially since each character has their own separate abilities they must use for the game to progress.  However that is far from the peek of the innovation we saw in the game when it comes to the co-op aspect.  First of all, Hunted: The Demon’s Forge is heavily based on the co-op and what I mean by that is, you are not simply playing the game along side each other, but you actually need each other most of the time in the game, whether it is to heal your partner or have them use a unique attribute to progress in the game.  The developers, inXile, though were keen enough to make it so that you don’t have to be standing right beside your partner to play the game, although it doesn’t hurt.  You can heal your downed partner from nearly across the map by hurling a magical ball of energy, reviving them.  Many puzzles as well as collecting things can be long distance oriented really adding an edge to the co-op that I have never seen before.

Items are based on your stats, so for example I can do more damage with a certain sword than lets the other character dependent on my stats.  The magic is split into two types, casting and spells while Caddoc can use more general magic, E’lara on the other hand tends to have more arrow based magic capabilities even though both characters carry bow’s.  E’lara has the classic bow while Caddoc uses a crossbow and both ranged weapons require ammo/arrows.  With weapon based magic there is also a battle charge where your magic goes to your partner. 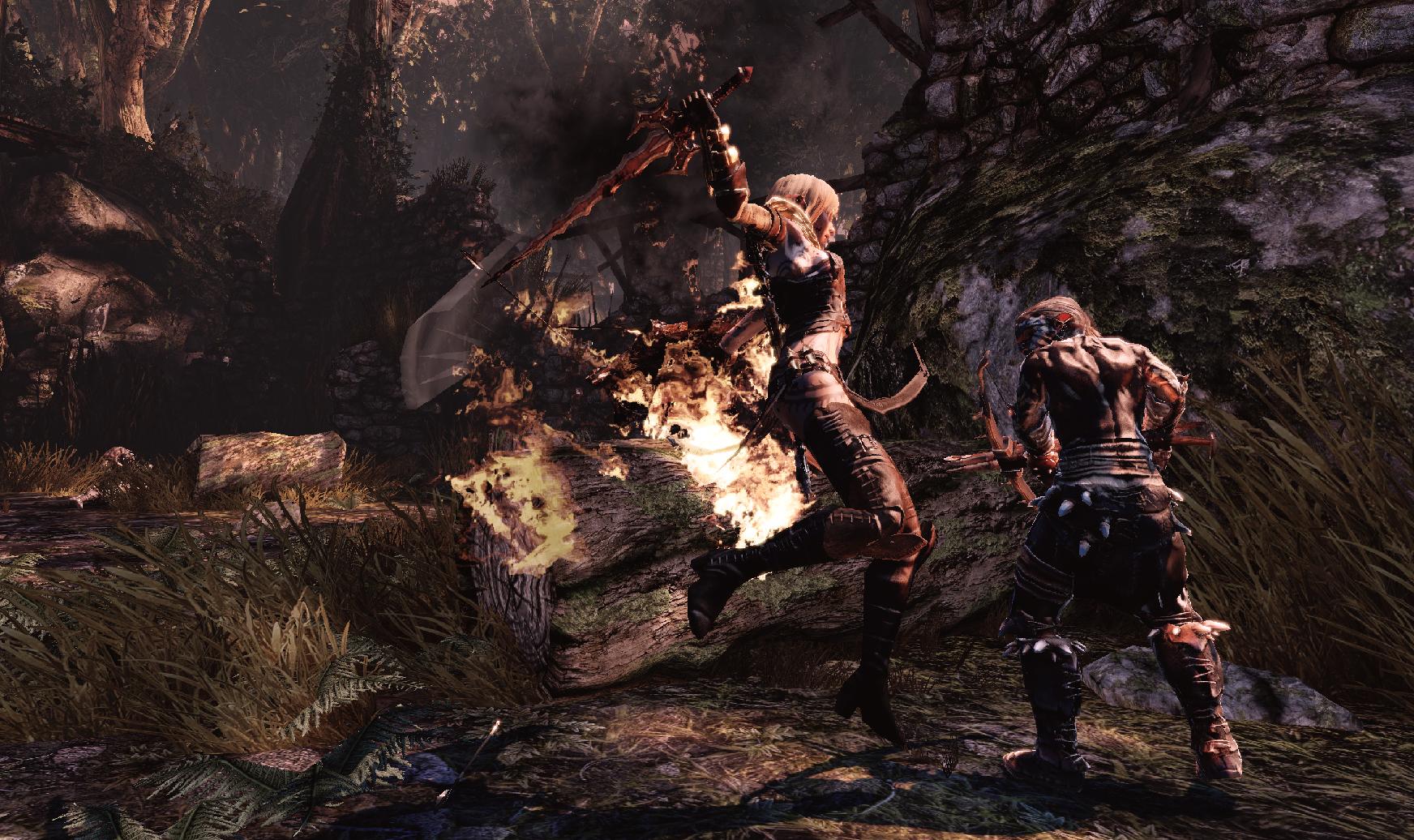 There is a looting system and gold is the general currency in the game.  You can replay cut-scenes to explain a mission again to you.  The enemies range in different types, like heavy, weak or fast while enemies spawn depending on how long you are in an area.  Enemies can either use magic or weaponry against you while there is a class of sub-bosses as well as a fully fledged boss.  Traps can be set on the ground and going back to specific abilities, E’lara can set her arrows on fire with different color flames that are needed to progress in the game or even finding secrets.  There are also challenges in the game that are unlocked by doing things like reviving your partner a number of times.  Unfortunately, in RPG tradition your health does not regenerate and requires health potions you must consume.  The can be drastic environment changes as well as parts of the environment being interactive.

The general graphics during gameplay are very impressive as well as the character detail between their tattoos and clothing.  The armor you wear changes as you progress through different levels.  The lighting effects were well done and the CGI rendered cut-scenes were stunning in addition to them not looking so different from the actual gameplay.  Another cool aspect was that I noticed after being covered in blood from battle, I still wore the blood of my enemies during the following cut-scene.  By far though the co-op intense aspects noted are what I feel will make this game amazing in addition to the 5.1 surround sound optimization and the stunning graphics.  Hunted: The Demon’s Forge is looking good and might just be the co-op game that defines them all.  The game will be out on May 10th, 2011 for the Xbox 360, Playstation 3 and PC.