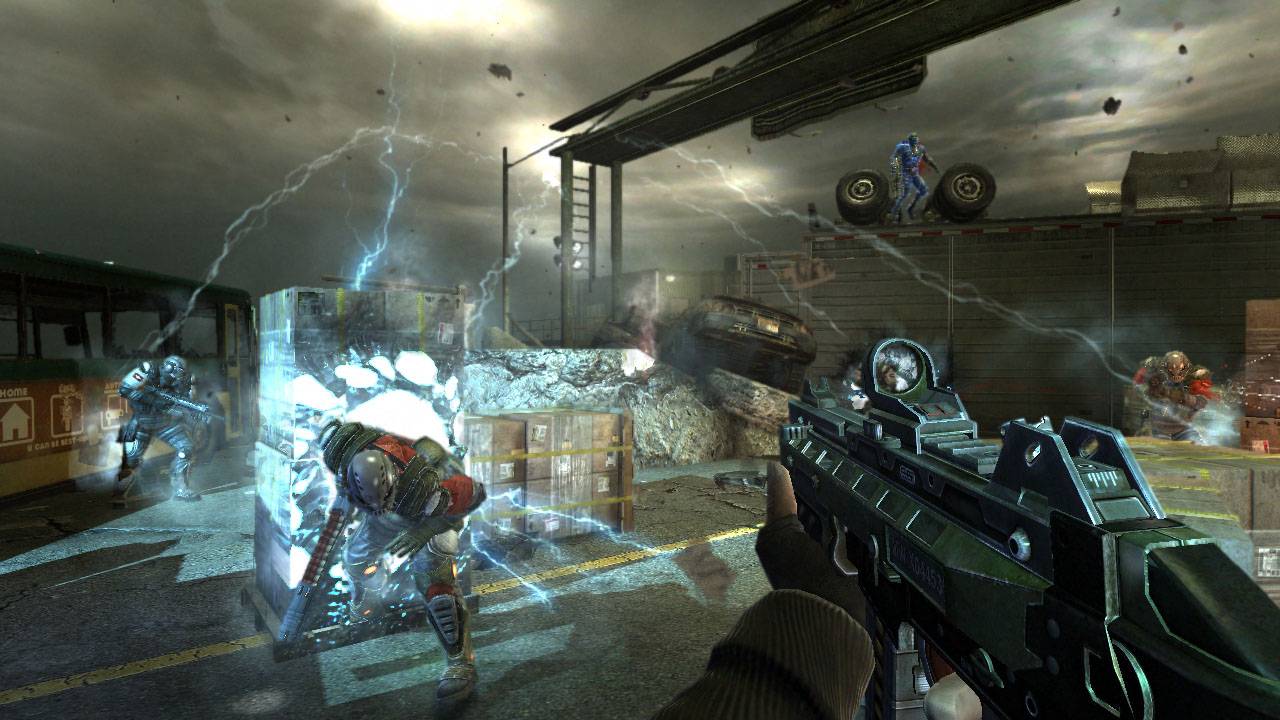 Please Click the image to see it in a pop up and use back next button to navigate through them.

What are the PA and EPA

The PA (Power Armor) and EPA (Enhanced Power Armor) are two mechanical weaponized vehicles developed by Armacham.  Requiring only a single pilot, these machines are easily manned and pack enough power to turn the tide of the battlefield.  Their design allows them to drop into combat from far distances, granting the PA and EPA quick access to any hotzone they are needed.
The PA is smaller and maneuverable, allowing it to operate in tighter conflict areas.  Armed with two auto-cannons loaded with explosive rounds, the PA can force its way into where it needs to go.  Additionally, the PA has a shoulder mounted energy weapon that not only eliminates threats but has the power to ignite what it touches.
The EPA is a much different mechanical beast.  What it lacks in speed and maneuverability it more than makes up for in firepower.  The EPA is a titan, capable of taking on an army with its vast armament.  It is equipped with dual chain guns that can rip both man and machine apart along with a ballistic missile system capable of locking on to the most evasive of targets.  The EPA is Armacham’s most deadly weapon and the damage it can create in the wrong hands is staggering.

A Brief History of the PA and EPA
Mechanical combat has been a part of the F.E.A.R. series from the beginning.  The PA and EPA are a theme that has carried through all three games.
The PA was originally developed by Armacham as part of a private military contract to create experimental weapons.  Reserved for only the greatest threats to Armacham, the PAs were sent in during F.E.A.R. in response to Fettel’s assault on the organization and Point Man’s infiltration of the facility.  While never driven during the game, combat against the PAs were highlights of the single player campaign.
The EPA was introduced in F.E.A.R. 2: Project Origin as part of Armacham’s response to cleaning up the aftermath of the origin facility explosion.  The EPAs were able to clear out threats in the streets with ease as no conventional weapon can stand up against them.  However, the protagonist of the game, Michael Becket, was able to get behind the wheel of the EPA and the results were less than pretty.
In both entries of the series the PA and EPA have played a role in the player experience and F.E.A.R. 3 takes that to the next level.
The PA and EPA in F.E.A.R. 3
Single Player and Divergent Co-op Campaigns
Following the tradition of the F.E.A.R. series, the PA and EPA play an integral role in F.E.A.R. 3 as well.  For this entry the stakes are raised, combat within the vehicles has changed, and Day 1 Studios brings their award-winning history in Mechanized Combat to the equation.
In F.E.A.R. 3 both the PA and EPA will be available for players to use.  All their weapons and abilities are in the game, giving the players a wide array of options to create havoc and destruction.  Time spent inside the PA is fast paced and explosive while segments involving the EPA are nothing short of epic.
These machines, while immensely powerful, are far from indestructible in F.E.A.R. 3.  When inside one, strategy and skill are just as important as power.  Day 1 Studios has made sure the tension of combat remains high when piloting a PA or EPA.  Rest assured, when these vehicles are made available, there will be a veritable army waiting to face them with the skills and tools to destroy the EPA/PA as well as the player.
The combat systems of the EPA have a great deal of depth.  Not only is the EPA equipped offensively, but it also has a limited shield to defend itself.  This defensive measure is not indefinite and while activated offensive maneuvers are halved.  The decision when to attack, when to defend, and how to manage resources is more important than ever.
It is also important to note Point Man can drive the PA and EPA at any time.  They are also accessible to Fettel, but he must be in a possessed body to take the controls.  This adds a layer of depth to Fettel’s strategy as he must allocate his resources accordingly if he wishes to operate a PA or EPA.
It is also important to note, Point Man and Fettel will encounter PAs and EPAs while on foot.  These encounters are critical moments as taking on such powerful machines is a monumental task.  These engagements are woven throughout the game to add tension to Point Man and Fettel’s journey to reach Alma.
The PA and EPA combat in this installment of the F.E.A.R. franchise are deeper than ever.  Not only are there more options available, the experiences within the vehicles have been structured to maintain the intense tension for which F.E.A.R. is known.