Where the hardcore racing sim fans meet. Newbies and people with an aversion to glitches, solo play and nonexistent modes need not apply.

After a yearlong pit stop, Codemasters is back with F1 2015, the latest entry in their ongoing bid for racing simulation supremacy. How it stacks up depends on your interpretation of broadcast quality visuals overshadowing the plethora of many issues the game has.

In terns of F1 games, the driving itself is probably the best it’s ever been. Historically, previous games in the series have been rather forgiving in terms of handling; however, this year’s cars seem to accurately reflect the nature of the F1 experience.

Battling for position is more accurate than ever before, as you have to constantly manage your acceleration and tire wear, whether in sunny weather or rain soaked deluges.

The AI cars are quite lifelike as well, capable of defending and overtaking in intelligent ways, as well as aggressive movements that force you to avoid collisions. This aspect of realism doesn’t just end with the other drivers either, as the race engineer will literally talk your ear off with interesting information about the track, and your overall strategy, through practice sessions and the eventual race itself. 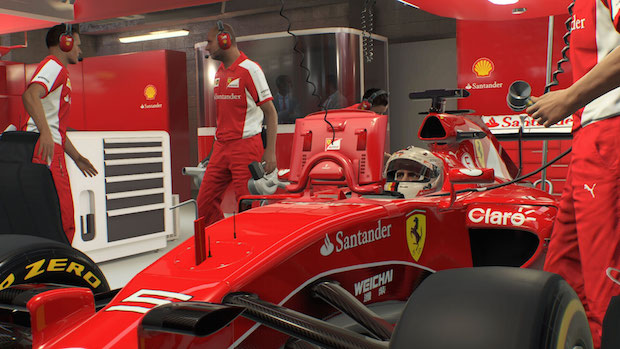 "Historically, previous games in the series have been rather forgiving in terms of handling; however, this year’s cars seem to accurately reflect the nature of the F1 experience."

While, the quick race mode lets you hop into any track and give a full race a shot, or simply enjoy a short three lap cruise around the track, the majority of the game’s racing action takes place in Championship Mode.

In this mode, you take control of your favorite F1 driver and race a full seasons, with customizable practice and qualifying lengths. One interesting aspect of the game is that it also comes with all of the drivers and tracks from last year’s season, so in essence, going back in time is as easy as accessing the options menu.

There is also a Pro Seasons mode, which thrusts you literally into a expert level racing experience with full race weekends, with realistic event lengths. Suffice it to say that it’s primarily to satisfy the hardcore F1 enthusiasts out there.

Unlike previous entries in the series, there is no Career mode this time around, so if you’re hoping to create your own driver, you’re probably running on exhaust fumes. Also, there is no co op to speak of, as in previous games, you could play locally via split screen. There is a multiplayer option to play with friends in individual races, though (not that it works all that well, or at all, actually.)

While the game sports some nice visuals at times, some graphical glitches really bring the realism to a grinding halt. Vanishing wheels and other graphical glitches serve to constantly remind you that at the end of the day, you are playing a game. 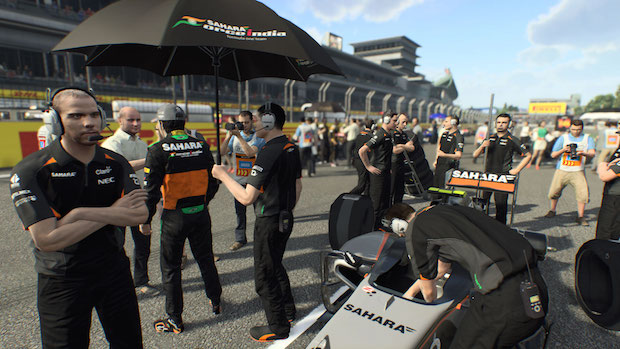 "Vanishing wheels and other graphical glitches serve to constantly remind you that at the end of the day, you are playing a game."

In game crashes may be one of the highlights of the visual arena, boasting spectacular effects, however car damage is totally inconsistent and almost seemingly random, as if you ram into another car from behind, your front wing will either be unaffected at all, or shatter into a million pieces.

F1 2015 is a strange hybrid of the workable and the worthless. Visual splendor meets glitches in some graphical areas. Feature rich previous incarnations in the series seem to warrant their inclusion here, yet this game is painfully devoid of them, like a lack of modes, customization or any kind of working multiplayer model.

Where F1 shines is when you’re careening around the track, while changing your strategy to compensate for the rain soaked asphalt that’s suddenly eating up your normal tires, and then switching to wet weather tires just as the track dries off says a lot about the changing conditions in the game and the need to adjust your tactics in the fly to come out ahead.

The game also features voice commands, however, you’re pretty much stuck using stock phrases such as “fuel target” or “driver behind”, rather than the obviously more useful ability to ask who’s in third place or how far ahead a particular driver might be.

One could make the argument that many of the incomplete or missing features set the stage for a new foundation, of sorts, in the world of F1 racing games that Codemasters hopes to build upon in the future with subsequent entries in the series. However, this does nothing to address the overall unfinished nature of this game. 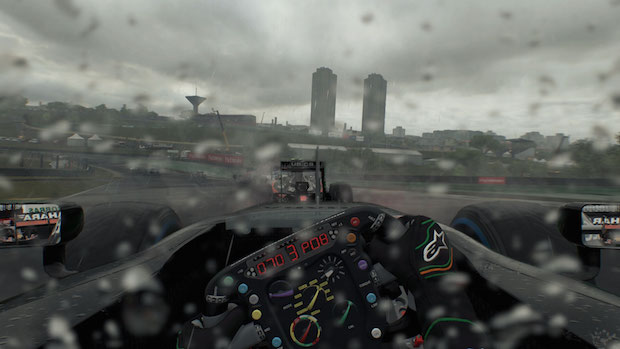 "Feature rich previous incarnations in the series seem to warrant their inclusion here, yet this game is painfully devoid of them, like a lack of modes, customization or any kind of working multiplayer model."

Perhaps the ultimate legacy of F1 2015 lies simply in what could have been. In a perfect world, it could have been given the checkered flag and ushered into the hall of some of racing’s greatest sims ever. It could have been praised for its ability to be almost infinitely adjustable, in terms of difficulty, and still remain challenging. It could have even been celebrated as an authentic reproduction of a million dollar motorsport. Sadly, F1 2015 could have been any or all of these things, but ends up as a tragic case of “what is” instead.

Barren features, broken multiplayer and graphical glitches hammer the final nail in the tire however, in spite of the broadcast quality visual effects, strategic racing, and tight, responsive, but challenging car handling. Do yourself a favor and let this one stay in fifth gear for this lap around the track.

Final Verdict:
FAIR
F1 2015's accurate portrayal of on the track racing action and visual splendor is largely overshadowed by a dearth of modes, a host of graphical glitches and nearly nonexistent multiplayer.
A copy of this game was provided by Developer/Publisher/Distributor/PR Agency for review purposes. Click here to know more about our Reviews Policy.