Fable 3 is a fantastic real time combat RPG that is in no way Fable 2.5 as the game has upgraded all the great elements from Fable 2 and adding some very creative/unique aspects to the game that make it like nothing you have ever played.  The game begins half a century after the ending of Fable 2.  (Fable 2’s ‘See the Future’ DLC gives you a glimpse of Fable 3 as you see yourself becoming King).  Fable 3 has entered its industrial age and it begins with your brother, the tyrant King that he, has made Albion not such a great place to live with people starving, over-working as well as hoping that things will change.  That is where you come in, as you are a decedent of the original Fable series heroes, you must overthrow your brothers ruthless ways as King, to take the crown yourself.  After that it is up to you as to how the world of Albion will change.. for better, for worse or maybe just in between. 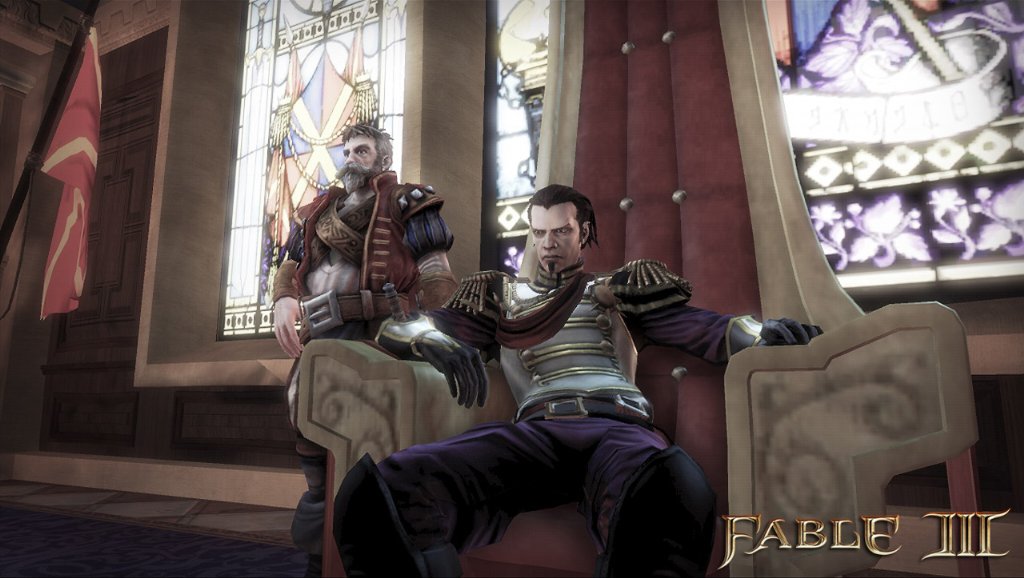 The mechanics of the game are as smooth as ever, with Fables traditional real time combat system, melee, ranged and magic attacks are just a button away.  This time however, your weapons change depending on how your character acts, decides things, the way you approach combat, what your wear.. basically everything you do can make you weapons change in form and color granted you keep leveling up your abilities in the ‘Road to Rule’.  Your weapon could be melee weapon could be short and stubby from constantly blocking or long and narrow if you constantly attack.  (Note: Pre-order bonus weapon DLC seem to change appearance less drastically).  There are 50 weapons(Hammers, Swords, Pistols & Rifles) in the game not counting DLC weapons or main storyline weapons.  The magic in the game consists of two magical gauntlets that let you weave one magic spell to each hand, giving you a 15 combinations you can use once you have unlocked all spells which are; Fireball, Blades, Shock, Ice Storm, Vortex and Force push.  Some of these combos look awesome when used and really push the magical aspect to the limit while giving you even more options to make your character unique from other peoples. 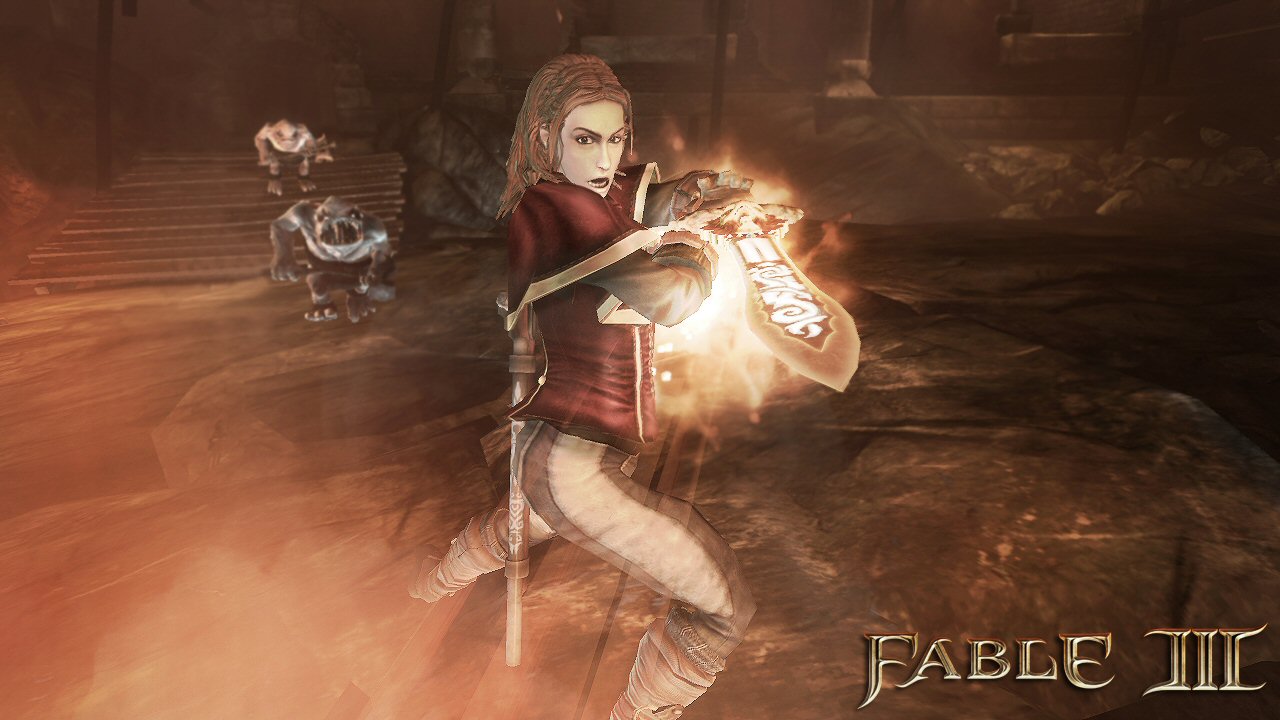 One woman you don’t want to piss off.

While the main story in Fable 3 is rather short and can be beaten rather quickly, there is so much more to do in between then and after you beat the game.  Many quests cannot even be done until the main story in the game is completed.  You can marry as many times as you like, have many children and befriend every NPC in the game (except the guards).  Every single NPC character you see walking around, you can interact with them and become friends, enemies, best friends or lovers as well as receiving quests from all of them.  [If you pre-ordered the game you should have had the option of creating your own villager (NPC) that you could have specifically created a background and personality for that would appear in the game to interact with. – More info here.]  The game is basically nearly endless with possibilities for so many different outcomes in the game depending on choices you make.  This makes replay value for Fable 3 very high as well as hope for some douwnloadable content that might last a little longer than Fable 2’s DLC.  Even right now you can download a set of free weapons and a dog suit; DLC is even accessible from the Sanctuary in the game where you can preview the items right there.  By pressing start, you enter your Sanctuary where you can change your appearance(Clothing, make-up, hair, tattoos) and you can now dye individual pieces of clothing or hair from a wide range of colors/tints/shades.  In the Sanctuary you can also view all of the items you have as well as equipping your weapons from displays and you can also use the world map here to travel/view quests while also being able to view all your statistics and compare them with your friends.  You can also find your friends in the Sactuary, seeing where they are and joining into their game from here.  Lastly the Sanctuary also displays your Trophies earned in the game and Achievements earned via a large wall. 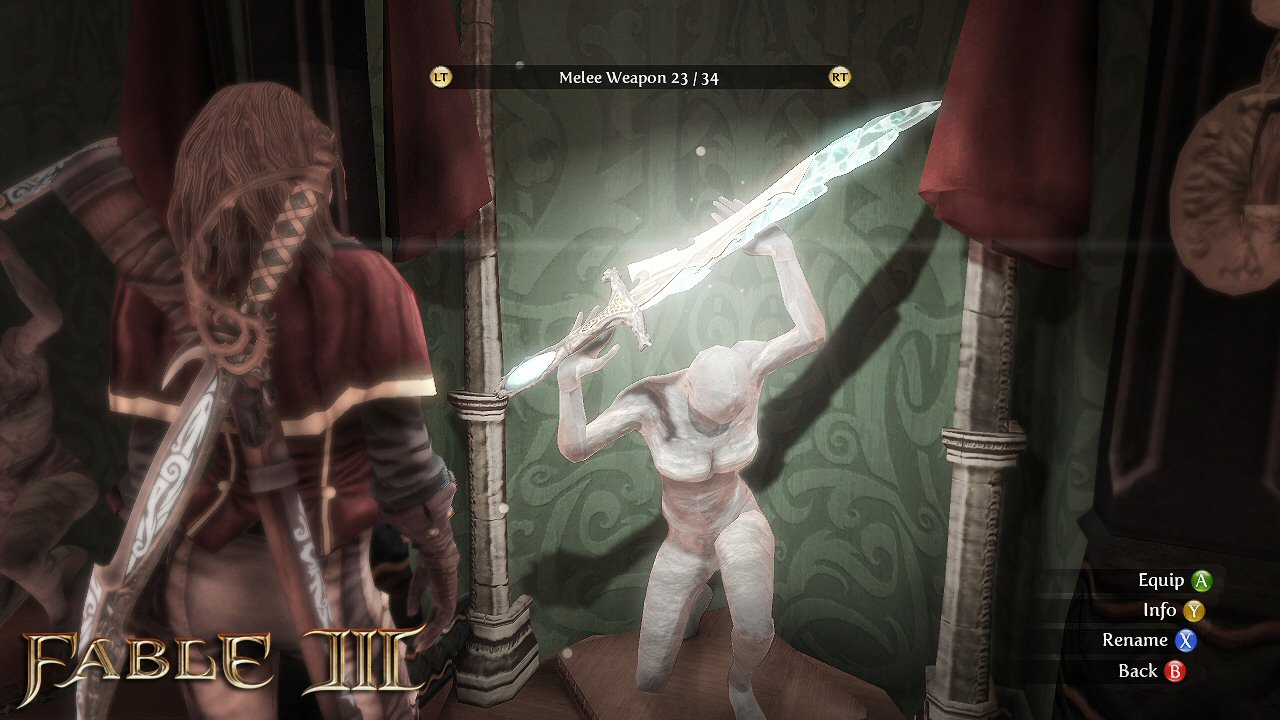 You can buy houses, repair them and wait until they rise in price or rent them out to earn gold.  You can also partake in jobs in Albion such as working as a blacksmith, making pies, catching fugitives, playing the Lute or you can just bet on the good old chicken races for money, which I would not advise.  Owning property is the best way to earn money however raising rent to high or prices of items in stores you own is considered bad morals which will lead you down the evil path. 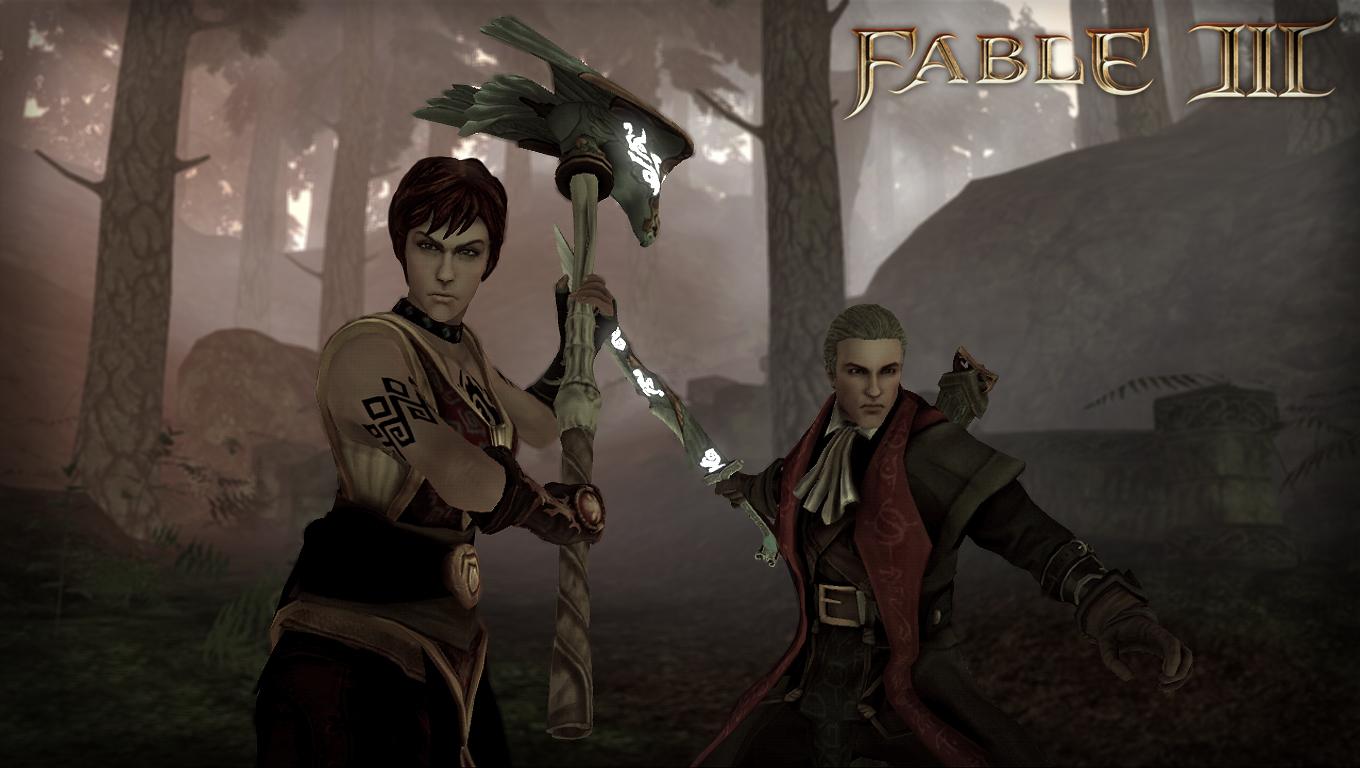 Two head are better than one. Fable 3 Co-op.

Playing co-op is a big part in Fable 3 and can be very beneficial.  You can enter a business partnership with some one where you share the gold you both have and earn.  This might be good or bad for you depending on your standings versus the other players.  Weapon trading is also a big part of co-op as there are many weapons in the game, 50 trad-able weapons to be exact with only 26 of them showing up in your game randomly.  This means you must find weapons in other peoples worlds or trade to get all 50 of them.  The same goes for Rare Gems as there is a total of 8 with only 4 showing up in your game. 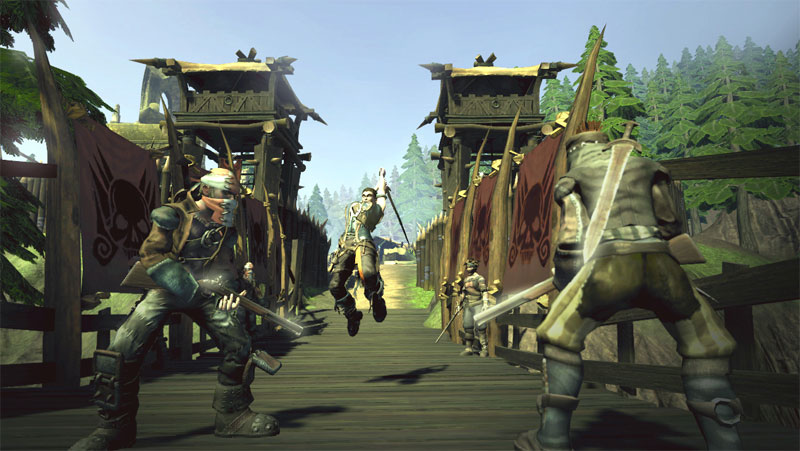 When it comes to interacting with someone you have many options depending on your moral status and can lead to some funny reactions as well as others that are unique.  After pressing ‘A’ to interact with someone you can tap a button or hold it down for a super expression.  For example, I can just tap the kiss interaction for a peck on the lips to a lover or I can hold it down until it says release for a much more exotic kiss that leads changes the NPC’s emotion bar more drastically.  You can hold hands with someone and take them places.. this option makes it much easier to have sex in the game or even an orgy.  Unprotected sex with people can lead to STD’s as well as having a child, while you have to option of wearing a condom granted you have purchased or found one.  The holding hands option can also be used to drag criminals to jail (good) or villagers to work (bad). 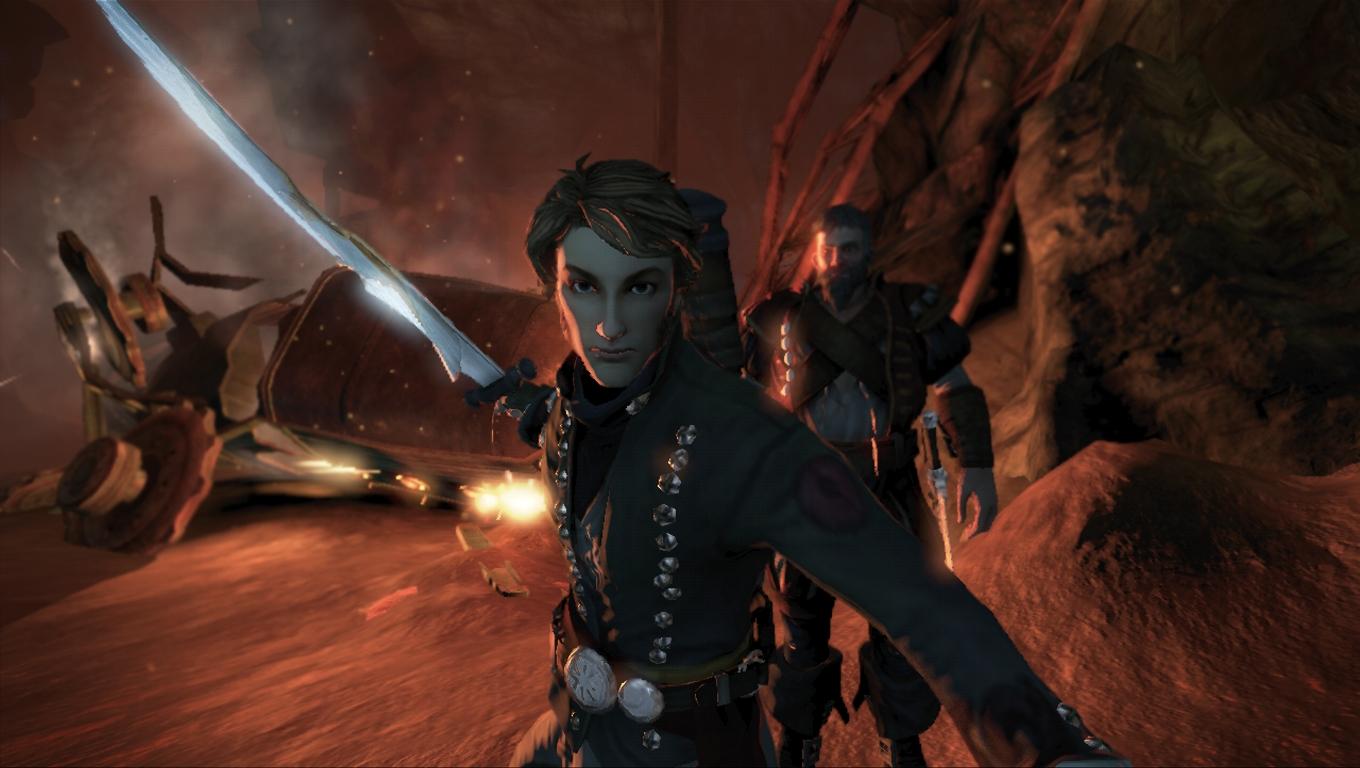 You never know what you are going to get with Fable 3, whether it is a guy passing out from your fart or a town stumbling drunk, puking everywhere because of the alcohol law you decided to lift.  Along with the funny jokes, humorous comments as well as a great quality and amount of voice overs done, Fable 3 is truly a great experience.  Other than the short main story and the occasional big someone can run into, the game you be on everyone must play list.  Everyone who plays Fable 3 is sure to have their own unique experience that should not be missed out on.

The layout alone of customization has improved ten-fold with menus replaced by a Sanctuary to control, customize and view every aspect of the game. The options are endless when it comes to moral decisions that have been made even harder to tell which one is clearly the right and wrong on in this game with some being drastic, leaving the replay value at an all time high. Co-op gives the player many additional benefits and is much better actually bringing your own customized character in the other persons game.

Like most games upon release can have bugs and glitches. Fable 3 is no exception with some players having major issues such as not being able to advance in the story, falling through the map making that play through/save unplayable forever and freezing issues. Some players may not encounter any of these problems while others may experience one of them, but for the most part as long as you play the game as it was intended to be played you shouldn't worry too much about these problems.

Final Verdict:
SUPERB
Fable 3 is an outstanding ending to a trilogy that has references from the previous games that make the Fable franchise a great Hero story. The game just seems to have improved on every aspect and expanded on it in Fable 3 compared to the previous games while adding new features that make for a great experience.
A copy of this game was provided by Developer/Publisher/Distributor/PR Agency for review purposes. Click here to know more about our Reviews Policy.