To read our original review of Fable III, click here.

Fable games have always known to be some of the most ambitious titles in the industry, yet never the perfect ones. While always aiming for big things, the franchise always lets its players down, disappointing them with bugs and glitches and poorly implemented amazing ideas. While Fable II, in my mind, is still a very memorable title, it has a truckload of flaws that douse the fire that would have otherwise made the game one of the best titles on the Xbox 360. Does Fable III, the newly released installment of this series, fall into the same trap as its predecessors? Does it aim for great things yet stumbles over flaws that make this a forgettable experience? Let’s find out in this 2nd Opinion Review of Fable III. 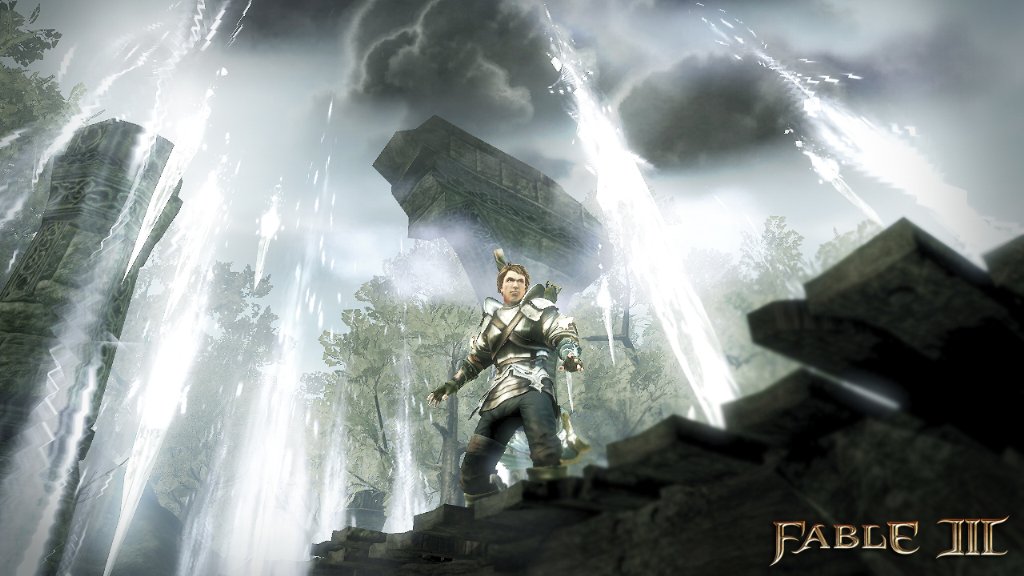 Welcome to Albion, a world full of surprises- pleasant, and otherwise.

Fable III takes place fifty years after the events of Fable II, and a lot has happened in the past half century. As the opening line of the game says in the very first minute, “the industrial age has come to Albion.” The streets are crowded with beggars, there is smoke rising from factories everywhere, poverty, hunger and greed have plagued the world, and the King of Albion, the son of the Hero in Fable II, is not helping matters. The despotic ruler is misusing his powers, literally taking lives, and disintegrating Albion step-by-step. It is up to us, the new Hero of Albion, and the brother/sister of this tyrannical ruler to stop this misery and bring back hope to Albion, by amassing an army of followers and overthrowing the king.

The basic gameplay structure of Fable III is very similar to past Fable games, and that is why it is so good. Combat is extremely simple to get the hang of- you have three buttons to use: one for melee attacks, one for firing with your projectile weapon and one for using magic. This works rather well and can be really useful in tense situations, when you just want to string deadly combos and get rid of your enemies. These “tense situations” though are not very common in the game. Fable III is a very easy, and a rather short game, especially considering the fact that it is still classified as an RPG. Killing your enemies and bosses- which are very far and few in between- isn’t very tough and you never really die. The few times that you do die, the consequences are of no effect whatsoever. Perhaps this is one of the flaws that Fable III retains from its predecessor. The much loved dog from Fable II makes a return (not the same dog) and it is as adorable as ever. It will help you search treasures and look for dig spots and even help you in battles sometimes. You can interact with it by playing, whistling, petting or inexplicably scolding it. Just like in Fable II, the dog becomes our strongest connect to the world of Albion, and most of the times, you’ll be coming back to Fable III not because you’re addicted, but because of your canine companion.

However, the combat part is not the most fun part of Fable III. The most fun and refreshing areas of this game are where the developers intelligently create a rather invigorating marriage between the political themes of the story and the gameplay. Fable III is, perhaps, one of the few games where story and gameplay blend with each other perfectly. 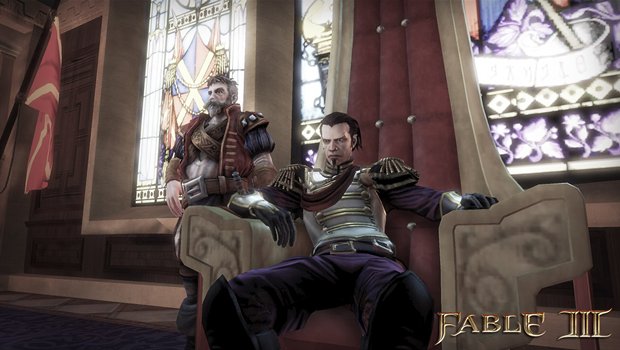 Arrrr, I am a badass king. KNEEL!

Throughout the game, we have to gather followers, and for that, we have to complete a set of tasks to gain their loyalty- kill some monsters, collect some artifacts, or make some promises you will live up to after becoming king and the usual RPG affair. However, you can also gather followers by very simple, negligible actions that were used in previous games just for variety. Shake hands, give money to beggars, please people by performing actions they’d like to see, and they gradually start liking you, and would ultimately become some of your most intimate followers.

The sense of satisfaction you gain upon gathering each and every one of the entire army of loyal supporters you gain throughout the course of the first half of the campaign is unmatchable, and is, quite simply, the master stroke that makes this game the worthy title that it is.

However, it is after we have gained the support of Albion and overthrown the king that the true fun begins.

After becoming King, Fable III comes into its true elements. Remember the promises I mentioned above? The ones that you have to make to gain the support of the people of Albion to become the Ruler? Yeah, you actually have to live up to them. You will have the chance to live up to your word and did as you promised in interest of the people of Albion. This, though, would mean that you will have to use great sums of money from your treasury and from your own balance, and money used like this can get used up really quick. This would also make for a better world, though, and Albion would become the peaceful, quaint nation it was so many years ago, and you would be classified as a “good” ruler.

However, you can simply become the brother you overthrew to become the king, break your promises, save up the money and build better defenses for Albion, to prepare for an imminent battle. However, this would mean you would lose the support of all your loyal followers, and would become the “evil” king you were once fighting against. Not just that- Albion will become a dark, gritty and underdeveloped world. Slums and poverty, misery and depressions would be the ruling forces of the world.

The choices you face in the campaign are some of the best moments of the game, and are truly unforgettable. You will be thinking over the choice you must make for many minutes, thinking if the consequences would be the right one. Fable III actually makes you feel like a king. It is these parts of the game that make it the wonderful experience that it is. 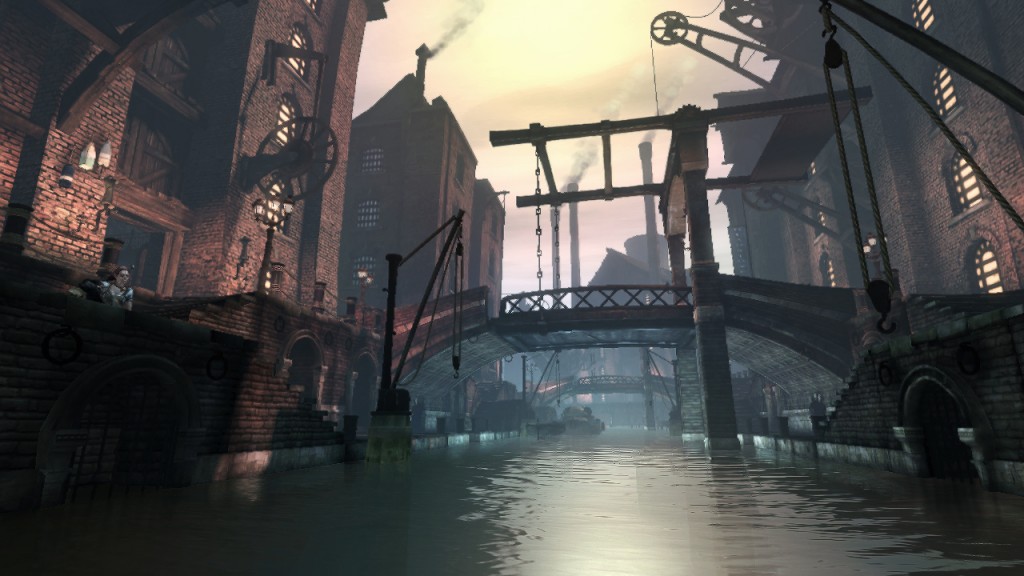 Fable III looks brilliant, some graphical bugs and glitches aside.

Past entries in the series have been known to be bugged and riddled with glitches, especially when it comes to the visuals segments. While Fable III does not have as many glitches as say, Fable II, it still does not deviate from this, shall we say, “tradition.” While the visuals are generally stunning, environments are greatly detailed, and small little things like the lighting effect, the animations (which can get a bit iffy sometimes) and shadows are really well done,  you will often see your spade going through your dog as you dig the ground, or the sky through solid ground or other really annoying glitches like that. It is in these moments when you feel the developers should have just delayed the game for some months and gotten rid of these bugs entirely.

The cutscenes, however, are simply bug-free and really well directed, the most movie-like cinematics the franchise has ever seen. What makes them so good is the fact that for the first time in the series’ history, the protagonist of the game speaks, interacts with other characters using dialogues. This makes for really well directed, involving cutscenes which move the story forward brilliantly. However, the sound is probably where the developers showed there laziness, recycling themes from Fable II for most of the part. While the said themes are not bad at all, the game feels outdated sometimes, and you feel as if you’re playing Fable II all over again.

Another aspect which many fans of the series would cry foul at is the removal of several- in fact most- Role Playing elements from the previous games. No more do you have to level up, no more do you have to collect thousands and thousands of things and no more do you have to develop you character slowly ad gradually. While many fans would boycott this game for this specific reason, I found this change to be surprisingly welcome. Not only does it make for a good change to the formula that was on the verge of growing stale, it also improves the pace of the game, with not much at all to distract our minds from the action.

Another revamped feature in Fable III that has been changed for good is the Start Menu. No more will you come across a never ending list of menus and sub-menus upon pressing the start button. Upon pressing the start button, the game takes you to a “Sanctuary” where you can walk into different rooms, which act as sub menus. There is a room for weapons, clothes and et cetera. This makes the game much more streamlined and the interface more user friendly. The mini-map also has been revamped, as the map now lets you have a look at a miniature model of Albion and teleports you to whichever place you select on the map. 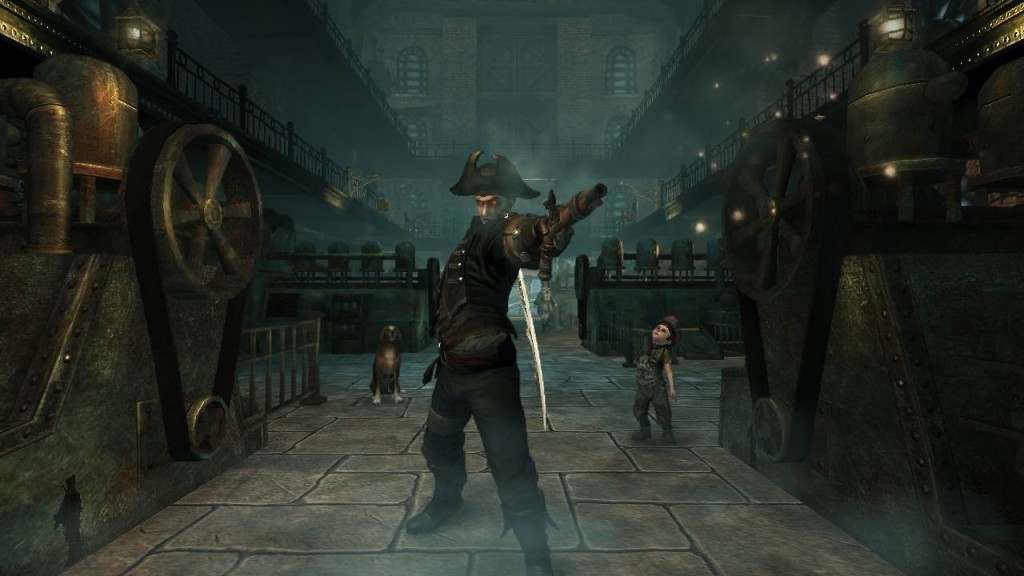 Interaction with NPCs feels very stripped down in the game. There are very few actions you can perform near the beginning of the game, and you earn more of them as you progress. This, however, makes the interaction feel very restricted and not quite as free-flowing as in Fable II. The hand-holding function doesn’t work very well either. It serves practically no purpose at all, and the developers could have simply done away with it.

So ultimately, is Fable III good? Yes it is- we made that clear when we wrote our original review for the game. Take this 2nd Opinion Review as just a confirmation of the fact that Lionhead’s third entry in this epic saga is definitely worth a purchase.

Gameplay is as fun as ever; Dog is as cute as ever; Graphics are pretty good; Well directed cutscenes; Really addictive; Protagonist can speak for the first time in the series; Stripped down RPG elements prove to be good for the pace of the game; Start menu is the best ever; Mini-map is awesome; The later sections of the game are really, really impressive

Really short; Sound is recycled from Fable II; Not quite as good as was being hyped to be; We came across several graphical glitches and bugs; Lip movement and facial animation is a bit off in some places; Light on story; The hand-holding function serves practically no purpose; Interaction with NPCs is more limited

Final Verdict:
EDITOR’S CHOICE
While still not the grand game that Mr. Molyneux was hyping it to be, Fable III still manages to provide an epic saga with fun-filled moments and some truly unforgettable gameplay innovations.
A copy of this game was provided by Developer/Publisher/Distributor/PR Agency for review purposes. Click here to know more about our Reviews Policy.