At E3 this year, Bethesda shocked us all when they announced that they would be entering the mobile game market, and with one of their biggest game franchises at that. Fallout Shelter would be a brand new game in the Fallout universe, tailor made for mobile devices, and featuring a different take on this post apocalyptic world. What is more, it would be available right then and there, and without abusive microtransactions at that.

When Bethesda does something, they do it well. Expecting a great mobile game from them (with a healthy dose of caution and anxiety over fears that they may succumb to the microtransaction curse) was pretty normal then. And sure enough, with Fallout Shelter, Bethesda have delivered. It’s not the best or even deepest game of its kind on the market, but it’s done well, well balanced, highly addictive, and with loads of the series trademark humor, all of which serve to tie it into the franchise’s mythos really well.

Fallout Shelter is a management sim game. I guess the closest parallel to it that I can think off the cuff is something like SimCity. In it, we are tasked with the construction and management of an underground fallout shelter, and to make sure it keeps running properly (and basically, hopefully sidestep the catastrophic events that generally hit all these underground vaults and shelters in the mainline Fallout games).

Like with any builder/management sim, Fallout Shelter is a game of trade-offs, emphasizing opportunity cost- there are resources you need to gather (Power, Water, and Food, not to mention bottle caps), for which you need to generate the right facilities. But each facility needs to be manned by people, and you may not have enough people- in fact, you won’t get enough people until your vault grows. It’s an interesting conundrum, and it leads to a great gameplay loop- do you want to emphasize rapid expansion (you build the vault inside a mountain), and hope that attracts more dwellers you can use to man your facilities? Or do you consolidate, and take the slow and steady approach? 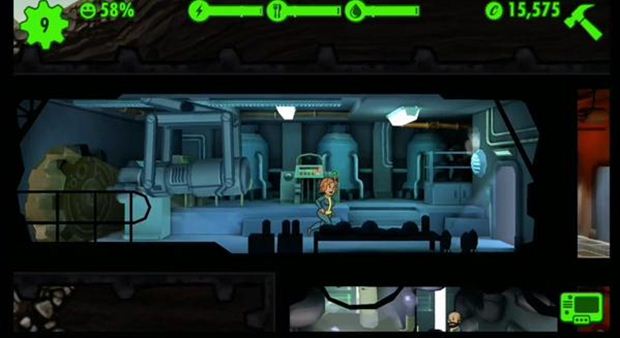 "There’s a lot going on in Fallout Shelter, and it can take a while to get a handle on."

And what about building the vault? You need to expand by selecting a spot in the mountain, and the new room or facility is usually built instantly. But make the vault too big, and you’ll have power shortages, unless you have enough power stations. Have too many people, and you might run into water and food shortages. Try to speed up production of, well, anything, too much, and you’ll have a breakdown of your facilities, leading to fires or infestations from radroaches.

None of this talks about the finer nuances of the game- for instance, each of your dwellers is well suited to certain jobs, meaning you can’t just randomly drop someone to work at a diner, for example. Within the vault, you can manufacture your own supplies, such as weapons, armor, and medical supplies. Within the vault, you can essentially see new babies being born (and try to increase population that way) by cooping together a male and a female in a room long enough (though of course, that means they are not working at any of the other facilities for this period). You can send dwellers out into the wasteland to scout and gather resources. You can get attacked and raided by bandits.

There’s a lot going on in Fallout Shelter, and it can take a while to get a handle on. Early on, every disaster can seem like the end of your vault- a raider attack can be devastating, the lack of resources killer. That said, playing the game long enough usually leads to a good understanding of the mechanics, and pretty soon, you have a largely automated, self sustaining society.

It is at this point that the first of Fallout Shelter’s problems kicks in- boredom. Once you have the place up and running, there is no reason to actually keep playing. Once your resource problems have been brought under control, you don’t have any incentive to keep returning to your society. No new gameplay loop or challenges arise, leading to a game that at some point devolves into mindless tapping on the screen without any challenge and any payoff.

The issue arises from the lack of a real endgame. Other sims, such as SimCity, sidestep this problem by having an entirely different set of issues arise in the late game stages. Fallout Shelter seems to be balanced exclusively for the early game, and this leads to an issue once you have invested a certain number of hours into the game. 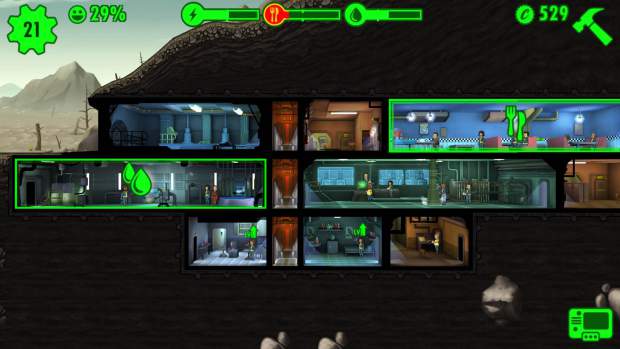 "Microtransactions barely figure in this game at all. They are there, but they’re entirely optional, and while buying things with real world money will help you prop up your fledgling society, it is by no means necessary"

In Bethesda’s defense, they don’t try any of the usual mobile game tactics such as having new, ‘difficult’ challenges that all but mandate microtransactions- in fact, microtransactions barely figure in this game at all. They are there, but they’re entirely optional, and while buying things with real world money will help you prop up your fledgling society, it is by no means necessary. In fact, given that the only time the game is actually challenging is in the early game, I would argue that the microtransactions make the game significantly worse.

The other issue is that the mechanics themselves, while seeming almost daunting in their complexity at first, are ultimately revealed as fairly shallow- once you have the right people doing the right jobs, that’s… it. Especially since once you have your resources problem under control, you don’t even have any real incentive to construct new facilities, or indeed, to expand. No new gameplay mechanic arises which may add more nuance and depth to Fallout Shelter.

Be that as it may, these problems ultimately only make themselves apparent if you play the game for long stretches at a time. However, played in short bursts, as a mobile game is really meant to be played, Fallout Shelter is pretty damn great- in short bursts, there’s a lot to do here, and you’ll keep returning to it for a good while. And hey, once you reach the endgame stage of your vault, you can always just start a new save, and start the cycle afresh.

This game was reviewed on iPhone.

Addictive, simple, and well nuanced for a mobile game played in short bursts; lack of microtransactions

Ultimately, the game is only balanced for short play sessions- the lack of any endgame, or depth to mechanics, is revealed if you play Fallout Shelter too much for too long

Final Verdict:
GOOD
Fallout Shelter works best when played as a mobile game- get too addicted to it, and its lack of endgame, and shallowness of mechanics make themselves apparent, and start to create problems.
A copy of this game was provided by Developer/Publisher/Distributor/PR Agency for review purposes. Click here to know more about our Reviews Policy.