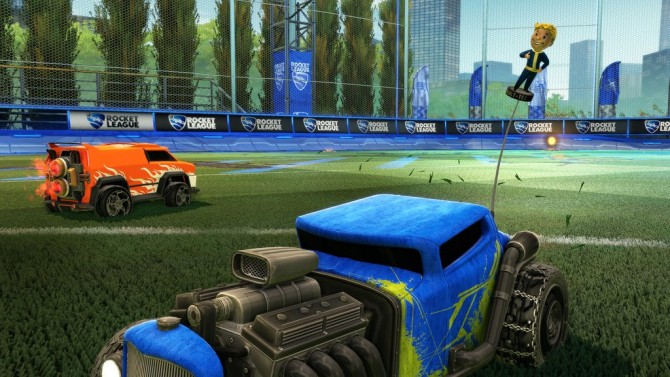 The Fallout craze continues, and developer Psyonix, who brought us the much beloved Rocket League earlier this year on PC and PlayStation 4, will be joining in on the fun by bringing a new Vault Boy themed antenna as a customization option to Rocket League later this week, in a free update.

The antenna basically affixes what looks like a Vault Boy Amiibo (wouldn’t that be awesome- Nintendo, Bethesda, you guys need to get on this, pronto) to the end of an antenna. It isn’t much, but it’s as good a way as any to announce you’re a Fallout fan. You can see the picture of the antenna for yourself, and tell us what you think.

Fallout 4 is now available for Xbox One, PlayStation 4, and PC. Rocket League released earlier this year for the PlayStation 4 and PC (PS4 members got the game for free, if they were subscribers of PS+). Stay tuned to GamingBolt for more information on both games.