Everything you need to know about Far Cry 4.

Slated to be the fourth entry in the Far Cry series of games that reached main stream popularity with the hugely successful Far Cry 3, the game is slated to launch on both last generation and current generation platforms. Arriving on November 18th in Europe and North America, and November 20th in Australia , the game will be available on Microsoft Windows, PlayStation 3, PlayStation 4, Xbox 360, Xbox One at retail and via digital download (most likely with Uplay third party DRM).

Far Cry 4 was confirmed (though not officially announced) by an Ubisoft fiscal year financial report which made mention of the game. The official confirmation of Far Cry 4’s existence came in the form of an official company report, in which Ubisoft CEO Yves Guillemot said, “”The year’s performance will be led by five games,…Assassin’s Creed Unity, Far Cry 4, Just Dance, The Crew and Watch Dogs.”

Despite only being officially announced through the above mentioned report, the gaming media and gamers all knew that this game would be coming. With the runaway success of Far Cry 3 which has sold in excess of six million copies and it’s stand alone spin off dlc Far Cry 3: Blood Dragon which solid over one million copies.

Partnering up with visual computing tech powerhouse Nvidia to help increase the graphical fidelity of Far Cry 4, Ubisoft is aiming to give Far Cry 4 “Hollywood Levels” of animation and a sense of realism. The game will take advantage of Nvidia’s PhysX technology as well as DX11 features and TXAA Anti Aliasing Soft Shadows.

The games narrative Director Mark Thompson has said that he wants to fix the “shortcomings” of the games narrative structure. In Far Cry 3, the player might have been expected to rush off and rescue someone or raid an enemy encampment. But the player could instead turn on their heel and explore for hours on end without any negative consequences or repercussions, despite the supposedly time sensitive situation.

This will apparently be rectified in Far Cry 4 as the game world and the developing story and narrative structure are meant to compliment each other. In keeping with a lot of more open ended games, the writers of the game have opted to give the players character less of a vocal role in the game to better allow for immersion through letting the player imprint on the character through his silence.

The game was met with some considerable controversy when it was first announced as some viewers felt as though the game’s standard box art and promotional art depicted a scene of blatant racism. The box art depicts the games villain and in position of superiority over a “dark skinned man” thus many had the knee jerk reaction of claiming racism.

Speaking about this, the antagonists actor Troy Baker has said “Imperialism and racism and everything has been a big thing in Far Cry 2 and Far Cry 3 especially, so it’s not about race. At all,” he explained. “As the story develops and people find out more they’ll see it plays no part in it at all. There’s just the fact that this guy is clearly ruling this country and of course with Far Cry… anyway, there’s a lot to talk about with Far Cry. I think this’ll be the coolest Far Cry game there’s ever been. I loved Vaas, I thought that was a great character, Far Cry 3, but Far Cry 4 is just mind-blowing.” 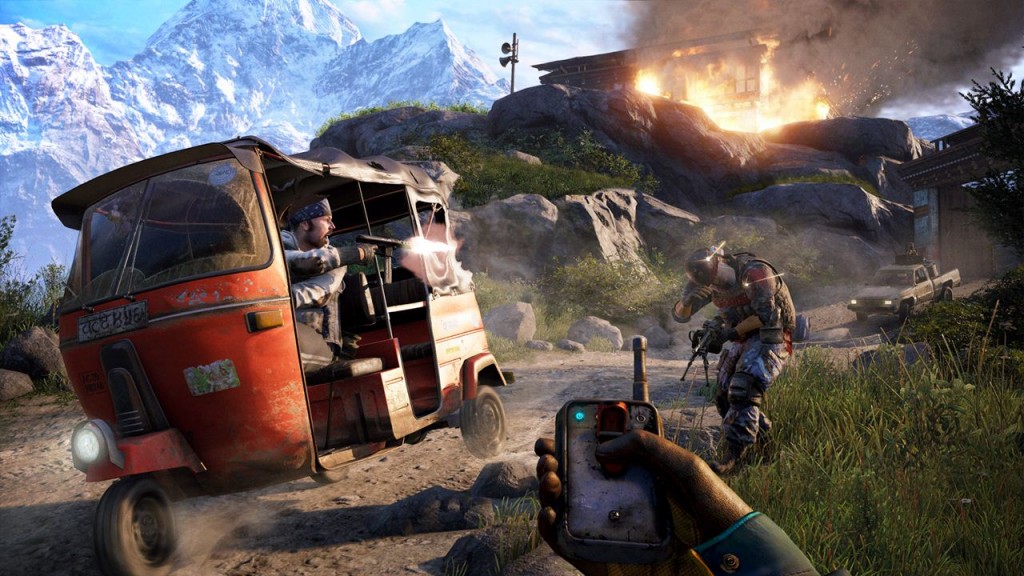 Far Cry 4 is set in the Himalayas, a mountainous region of Nepal and follows the story of Ajay Ghale, a native of Nepal that returns to his home country of Kyrat, one of the more remote regions of the Himalayan mountain range. When he arrives, he finds that the area is under the tyrannical rule of the self appointed king, Pagan Min. Ajay is only there to scatter his recently deceased mothers ashes but somehow becomes embroiled in the civil war that is raging. Despite not having much information, it would seem Pagan Min recognises Ajay by his eyes, perhaps pointing to a hitherto unknown relation. 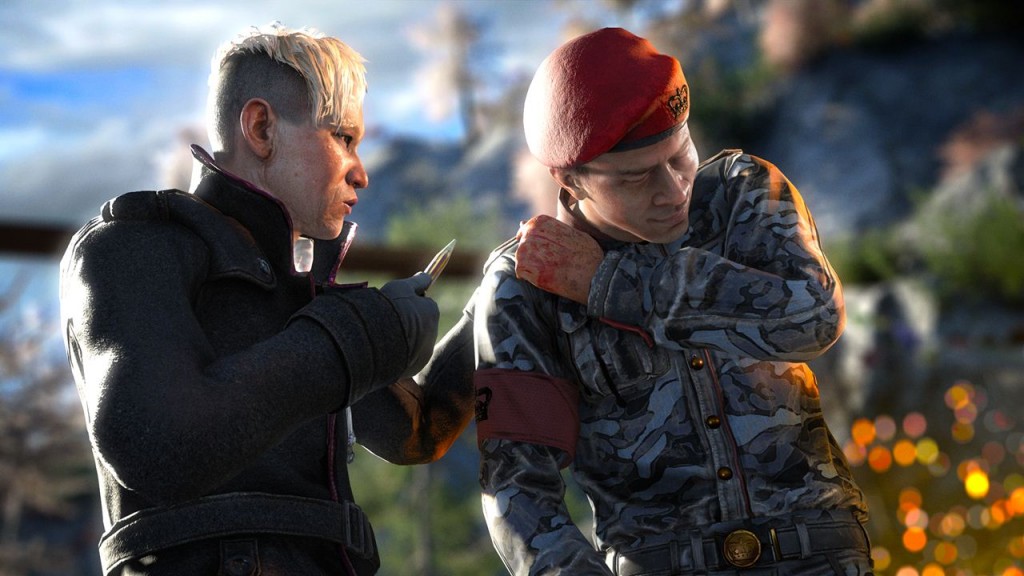 The player will progress through the game encountering many weapon types and a vast array of vehicles that can be used to traverse the game world. Seemingly taking inspiration from riding dinosaurs with lasers in Far Cry 3: Blood Dragon, the player can ride Himalayan elephants into the fray with guns blazing.

Like Far Cry 3, Far Cry 4 will feature a multiplayer component. Apparently Far Cry 4 will have “a lot more multiplayer…We are working on launching games that will be played for a longer time,” Guillemot said. “This will allow us to do more DLC [and] item-based sales in those games.”

One feature that has gamers excited is that anyone that doesn’t own a copy of the game is able to play the co-op multiplayer. It was revealed that the person who wish to step into the co-op must be playing on a PS3 or a PS4 and have a PlayStation Plus subscription. Meeting these requirements will get the player ten invitations that can be given to their PS+ friends so they can enjoy a free trial of online co-op with you.

While we don’t know how long these trial invitations will last, executive producer Dan Hay has revealed that they are going to be generous.

Ajay Ghale – Ajay Ghale is a native of Nepal returning to his home with the aim of fulfilling his now deceased mothers wishes. His plans of scattering her ashes are hindered somewhat when he discovers that a self appointed king has started a civil war in Kyrat.

Pagan Min – Pagan Min is the tyrannical self appointed King of Kyrat that has a thick streak of the eccentric running through him.