Far Cry 6 gets a roguelite mode with its new Lost Between Worlds expansion. Check out our review to find out whether it’s worth coming back to the game to explore the broken shards of various worlds.

Far Cry 6 feels like it’s in a strange place these days. Having originally been released around a year ago to a respectable reception, the game has largely disappeared from the public consciousness in favor of other interesting video games. That hasn’t stopped the company from its penchant to give its games a long life through exhaustive post-launch support, however, and Far Cry 6 now has its latest expansion: Lost Between Worlds.

To talk about Lost Between Worlds is to also try and understand some of the reasoning behind the design decisions surrounding Far Cry 6’s core gameplay. When you get right down to it, Lost Between Worlds in a way acts as a sort of distillation of Far Cry 6’s various game mechanics. That’s not to say it doesn’t have any of its own ideas. However, looking at the expansion through the lens of what you expect from a Far Cry game—an expansive open world with reactive enemies and a fun arsenal to play around with—will make you question a fair number of the decisions made along the way.

"When it comes to variety, I can’t really find much in the way of faults with Far Cry 6: Lost Between Worlds."

So let’s start with the basics. Far Cry 6: Lost Between Worlds is essentially a roguelite mode added on to the game’s combat. Putting players into the shoes of Far Cry 6 protagonist Dani once more, the expansion takes you through a series of hand-crafted levels with smaller pockets of randomness strewn about as you try and get your hands on some sci-fi crystals. Die along the way and you’ll have to start all over again. Get a crystal, however, and you’ll also unlock some new tools that make getting through levels easier, as well as allowing you to unlock new paths.

Each of the levels, referred to in the game as Shards, tends to focus on a single core mechanic to play with. For example, one level revolves entirely around underwater traversal, having you manage your oxygen levels while fending off sharks and underwater mines as you try to navigate the level’s bizarre architecture. Another will have you run from cover to cover as you try and avoid a constant barrage of random lightning strikes. Yet another one has you try and navigate a relatively straightforward maze that also happens to have moving walls. When it comes to variety, I can’t really find much in the way of faults with Far Cry 6: Lost Between Worlds.

Where I do find fault, however, is the core gameplay. Far Cry 6, while being a competent shooter on its own, doesn’t actually hold up when you take just the shooting into account. The game generally always feels greater than the sum of its parts thanks to the interactions with the open world sandbox alongside the shooting. Lost Between Worlds, however, focuses on just the shooting and core movement, which while alright to start out with, can start to get boring quite quickly.

It of course doesn’t help that the primary enemies you fight are just personality-less silhouettes of humans glowing either blue or red, which is a mechanic that feels essentially pointless. How it works is that blue enemies can only take damage from blue weapons, and red enemies can only take damage from red weapons. A single weapon can freely switch between the two colors at the push of a button, so rather than feeling like an interesting new mechanic, the color system feels more like just another thing to remember while in a firefight. Just pressing one more button is far from the most revolutionary addition to gameplay, after all. 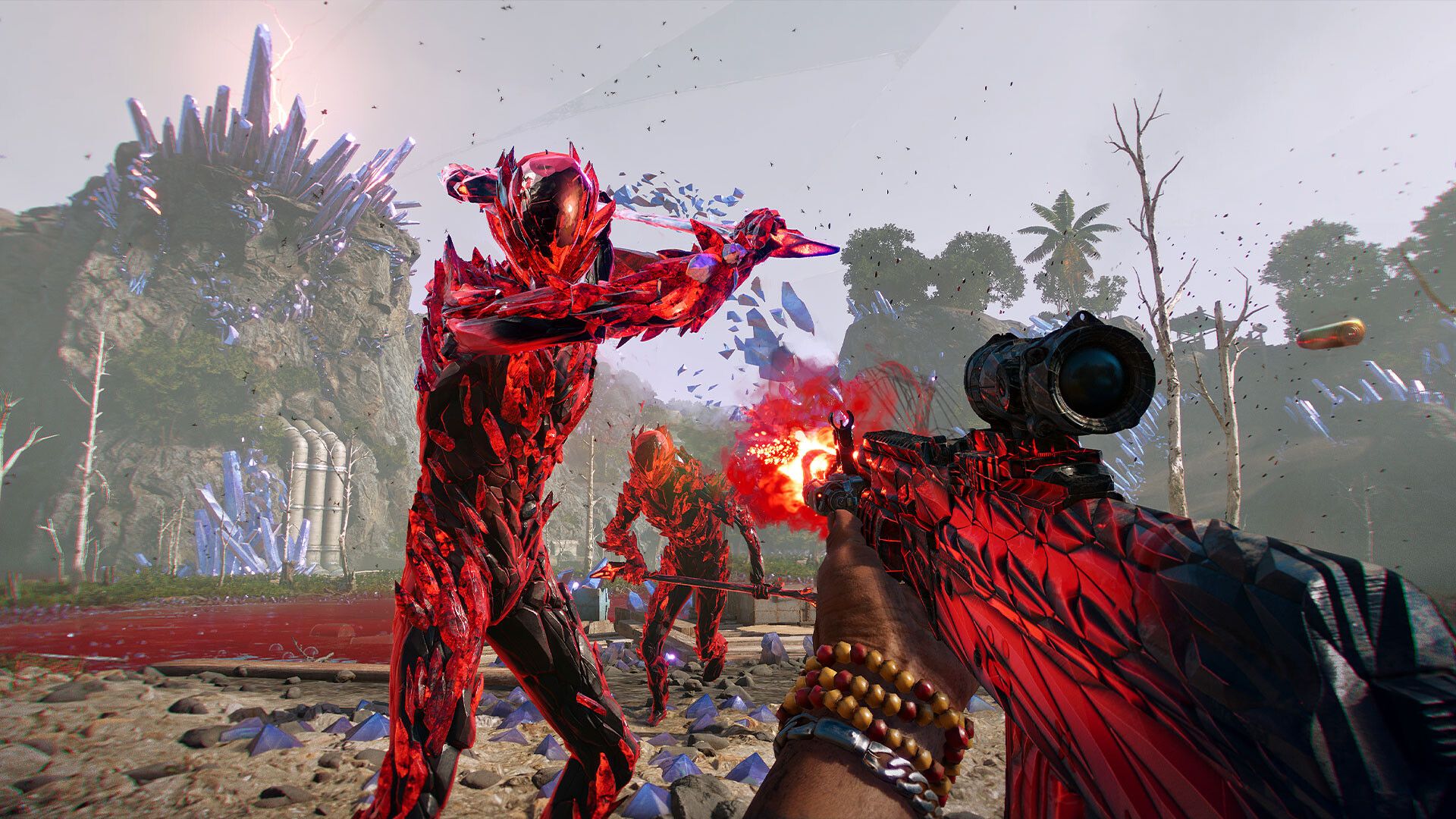 I will give credit where it’s due, however. The level designers were clearly in top form for Far Cry 6: Lost Between Worlds. Not only is each of the shards a visual delight, but many of the finer aspects of level design have been meticulously developed. In some shards, just about every fight feels like they could offer you quite a bit of freedom in how you might want to approach the encounter. There are even a few interesting additions, like platforming challenges and some light puzzle solving, that certainly caught me off guard.

Strangely enough, a lot of Far Cry 6: Lost Between Worlds reminds me of Destiny 2. Right from the opening which involves Dani dying to a mysterious explosion and being revived by a floating orb, down to the existence of the platforming challenges I mentioned previously, Lost Between Worlds feels like a trial run for the developer to potentially try much more ambitious in its next FPS outing.

I played Far Cry 6: Lost Between Worlds on PC, which, while gorgeous, certainly has its fair share of issues. The biggest problem, one I’m surprised the developer still hasn’t officially solved despite the game having come out over a year ago, is how Far Cry 6’s field of view works. The game lets you raise the FoV, which many PC players tend to do owing to playing closer to their screens than console players. For some reason, however, the FoV you set only applies to when you’re on foot. Get into a vehicle and the game will zoom into an incredibly restrictive 50-degree FoV. Even simpler things like climbing a ladder or jumping over a ledge zooms you in and out for no real reason.

Now, while there are mods and file edits you can use to fix the FoV issue, this still should’ve been officially fixed by the developer through an update. After all, a PC player shouldn’t have to use mods just to make the game playable, and the way Far Cry 6 constantly zooms the camera in and out over the course of a regular play session is bound to make someone sick. 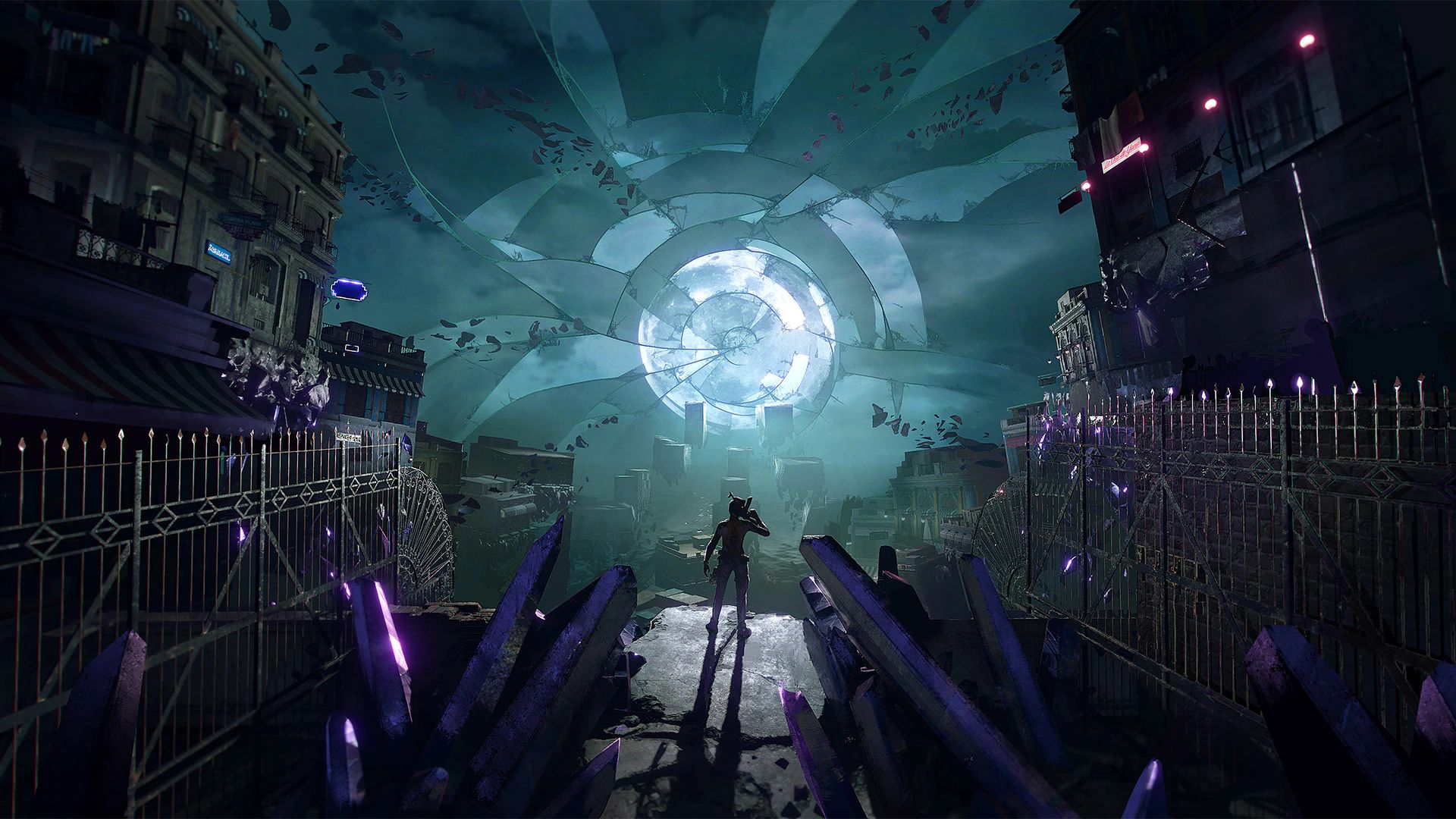 "In a better game with more to offer, Lost Between Worlds would’ve undoubtedly been a much more interesting addition."

On the technical side of things, there wasn’t really much to complain about. The game looks great and runs fine on my system, which is equipped with a Ryzen 5 3600, an Nvidia GeForce RTX 3060 Ti, and 32GB of RAM. The loading times were also great thanks to playing the game off a SATA SSD. I was quite easily able to maintain over 60 frames per second at a resolution of 1920×1080 on a 144Hz monitor throughout my time with Far Cry 6: Lost Between Worlds.

In a better game with more to offer, Lost Between Worlds would’ve undoubtedly been a much more interesting addition. A game with better shooting, or maybe even a fully-fledged loot system would’ve been a much better fit for Lost Between Worlds, especially when compared to the relatively banal shooting in Far Cry 6. It certainly doesn’t help that Lost Between Worlds is essentially siphoned off into its own corner of gameplay, which means that you don’t really get anything to take with you into the core game once you’re done with it.

With Far Cry 6: Lost Between Worlds, it looks like the developer has been trying to make Far Cry 6 the kind of game you could repeatedly come back to. However, rather than any real compelling gameplay to keep you coming back – the PvP and raids from Destiny 2, for example – the studio seems to be more interested in throwing ideas out there regardless of whether they’re half-baked. Lost Between Worlds certainly has a few interesting ideas, but they definitely aren’t interesting enough to warrant a return to Far Cry 6.

Final Verdict:
FAIR
Far Cry 6: Lost Between Worlds feels more like an experiment rather than a full-fledged release. The roguelite mode doesn’t really add any new compelling element to the game, and the core shooting in Far Cry 6 certainly isn’t strong enough to carry an expansion like this on its own. While Lost Between Worlds might be an attempt to bring players back to the game, the expansion doesn’t really offer anything in the way of rewards for actually doing so.
A copy of this game was provided by Developer/Publisher/Distributor/PR Agency for review purposes. Click here to know more about our Reviews Policy.