With the fate of Sony’s Wipeout series up in the air and Nintendo in seemingly no rush to bring Captain Falcon out of retirement, futuristic racing games are an endangered breed. Not content to leave this niche dead, Shin’en Multimedia provides their own take on the genre with Fast RMX, bringing a strong core from the Wii U and updating it for the new hardware.

If you’ve never tried a game like this, it truly is an experience unlike any other racing game. Vehicles hover inches above the ground, and travel at blazing speeds. The lack of traction demands a deft hand to more or less aim these vehicles around the track as opposed to driving them, utilizing your steering, air brakes and something unthinkable in most racing games, letting go of the throttle, to avoid careening right into a wall. 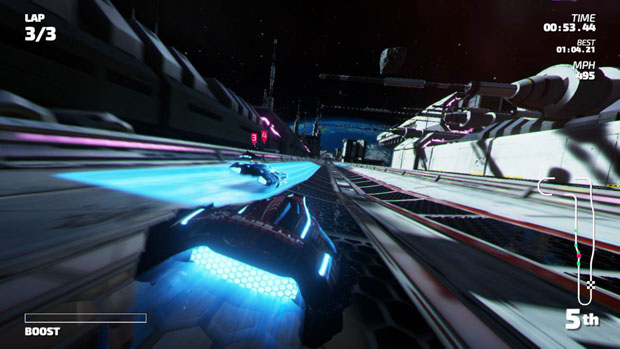 "Matching your polarity to the wide variety of boost pads, jumps and checkpoints can make the difference between first and fifth."

Fast RMX continues this tradition of being easy to understand, but requiring skill to master. Both in the visual aesthetic and how the vehicles handle the game is most reminiscent of the Wipeout series, but without weapons the game becomes more about your own racing line than it is about eliminating the competition, and so has a skill focus more akin to F-Zero.

While clearly taking big inspiration in how the gameplay mechanics of Fast RMX work, they work a fantastic polarity system akin to infamous Treasure SHMUP Ikaruga into the game that fits surprisingly well. Interactive elements are peppered throughout each course in orange and blue varieties, with a tap of a button switching your ship between the two colours.

Matching your polarity to the wide variety of boost pads, jumps and checkpoints can make the difference between first and fifth, as failing to be the right colour at the right time will massively slow you down. It’s a simple yet engaging layer to the core racing, easy to grasp but trickier than you might think to pull off while flying down the circuit. 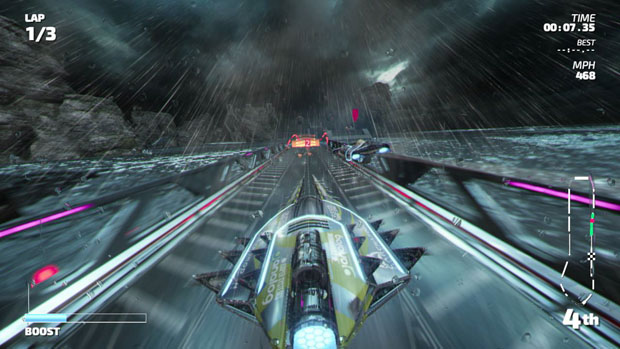 "When I fly off track from a poorly timed boost, that’s my bad, but when a Horizon: Zero Dawn reject trundling along happens to jump out in front of me, that feels rather cheap of the game."

These track elements are not the only way to get a leg up, there are pickups dotting the track that fill a boost meter activated with a tap. The items are usually placed near enough to the racing line to hint players to where they should go, helping subtly guide players into becoming better racers. Choosing when to boost puts another decision on the player, as going even faster isn’t always ideal.

Locales are fantastically varied, with many environments presented among the racetracks from forests, to deserts, to icecaps. Most of the tracks are very well designed and take great advantage of the polarity mechanic, weaving in tons of thrilling jumps and twists. However, more than a few have some obstacle, be it wandering mechs, rotating fans on a tube or something else, that more often than not become incredibly hard to see coming and correct for at speed. When I fly off track from a poorly timed boost, that’s my bad, but when a Horizon: Zero Dawn reject trundling along happens to jump out in front of me, that feels rather cheap of the game.

While the pace of the game and the resulting motion blur mean screenshots don’t really do the game a ton of justice, it’s really impressive just how much they were able to pull from the little Switch, the result being probably the most technically pretty game available on the platform. In single player I never noticed any drops from the 60 frames per second and while textures are simple, they’re colourful and pop off the screen. Weather effects believably react against vehicles and your screen, such as water droplets from rain. 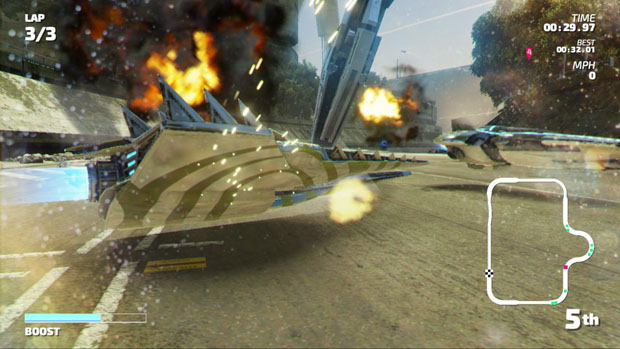 "Time Trials are set to be patched in, but outside of the championship cup race the one option is Hero mode, which plays the same but demands perfection from the player."

While on the TV the resolution would bounce back and forth between 1080p and 900p and come across generally more blurry than standards i’ve been spoiled with on other systems, when the Switch is in handheld mode it can lock to 720p to become one of the best looking handheld games I’ve seen. The simplicity of the controls also play to the strengths of the platform, allowing single joycon play alongside any other configuration you would care to use for up to four player multiplayer.

The racing being so solid is great for the game, because currently there isn’t a lot more to it. Time Trials are set to be patched in, but outside of the championship cup race the one option is Hero mode, which plays the same but demands perfection from the player, calling on the skills and knowledge of the tracks they are expected to have learned in championship as a single crash will end your game. For either mode, the only real change to the gameplay loop is how you might manage your boost gauge in Hero mode, to be sure you have some to lose in a crash.

Despite the lack of modes, the core of the racing gameplay and the varied locations help maintain the kind of energy required for a quick race of a few extended cups. Occasionally cheap in difficulty but always exciting to play, Fast RMX is a great complement to the Switch library.

This game was reviewed on the Switch.

Fantastic environments and track design. Polarity mechanic is incredibly inspired and fits the genre well. Gorgeous looking game for the hardware and makes great use of the modular nature of the system.

Occasional poorly implemented obstacles can make difficulty feel cheap. Nothing to do outside of grand prix racing.

Final Verdict:
GREAT
As a showcase for the Nintendo Switch Hardware, Fast RMX is a gorgeous visual showcase and adapts as easily as the Switch itself to however you and some friends might want to play it, at least as what you want involves straight racing. Never the less, the solid physics behind the racing and the great polarity mechanic make Fast RMX a pulse pounding time.
A copy of this game was purchased by author for review purposes. Click here to know more about our Reviews Policy.