The demo for EA Sports’ FIFA 14 is now available for PC, with the developer revealing via Twitter than the Xbox 360 version should go live between 10-12 AM UK time. However, PS3/PSN players will need to wait till tomorrow around 1-3 AM UK time for the demo.

An image showing playable teams in the demo has also been revealed. Check it out below, and see if your favourite team made it. 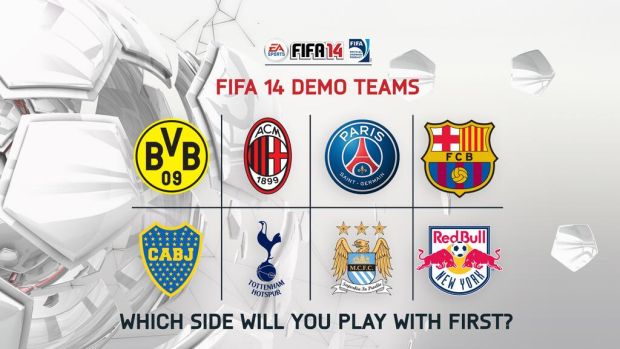 FIFA 14 is the follow-up to EA’s wildly successful yearly sports franchise, and will be launching on Xbox One and PS4 along with current gen platforms. However, EA’s new Ignite Engine will be exclusive to next gen consoles, giving an increased measure of visual fidelity.

FIFA 14 will be releasing on September 24th in North America and on September 26th in Europe for current gen platforms, while the Xbox One and PS4 releases will be available come November with their respective launches. Till then, enjoy the demo and share your impressions with us below.