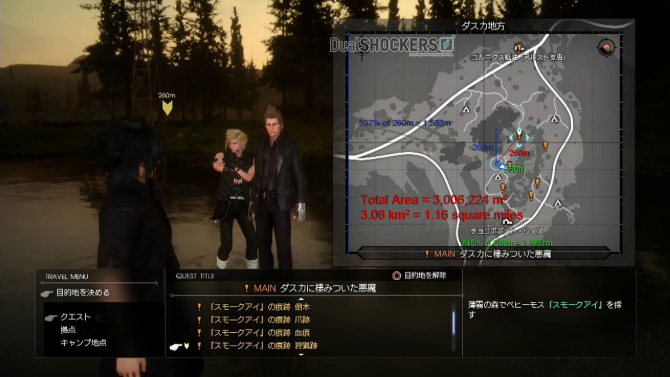 Two days ago, we brought you news of a 40 minute long video of Final Fantasy XV’s demo being played by the games director, Hajime Tabata, in which you can see the world, some gameplay and the night time portions of the demo all for yourself. Not long after that, we brought you some disheartening news regarding a truly shocking frame rate revelation for the demo.

Well now, DualShockers think they have cracked the numbers well enough to predict that the size of the map in the demo will be “1,937 meters by 1,552, for a total area of 3,006,224, which translates into 3 square kilometres, or 1.16 square miles”, which is apparently around 8% the size of Skyrim. This is based of measuring a screenshot, for what it’s worth.

As far as demo’s go, that’s a fairly decent size. But the problem that arises from their calculation is that unless the full game is massive in scale, then it may well come up being smaller than Skyrim. And that’s even if the game really is “10-20 times bigger than that of the demo”. This is one of those times where it’s not really clear just what to think, it’s best to wait for clarification from the developers themselves before making any assumptions.