For a free demo, Platinum Demo is astounding with so much to discover, learn and play.

What a show! If you had the opportunity to attend the Los Angeles Uncovered: Final Fantasy XV event, or even watch the live stream your jaw should still be on the floor after the initial 15 announcements about the newest entry in the franchise Square Enix revealed. Besides a release date, we are all set to receive the game’s Ultimate Collector’s edition, mobile mini game, feature length film, and prequel anime. Furthermore, Square Enix unveiled Platinum Demo: Final Fantasy XV which was available to download the night of the event on both PS4 and Xbox One.

Interestingly enough, Platinum Demo is not a small taste extracted from the full version game as the word “demo” would infer; but in fact a complete [albeit mini] entry from the point of view of the main protagonist of Final Fantasy XV, Noctis. Another interesting fact is that in this demo, Noctis is a child locked into a dream state trying to escape, which makes this somewhat of a prequel of sorts.

It’s all a bit confusing, really, and the tidbits of story sprinkled in are all a bit abstract — which makes total sense since it does take place in a child’s dream. 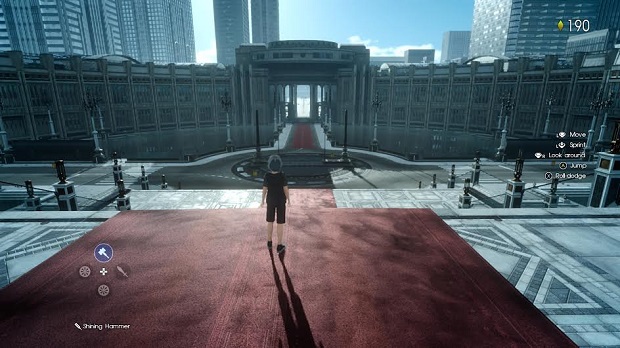 "Interestingly enough, Platinum Demo is not a small taste extracted from the full version game as the word “demo” would infer; but in fact a complete [albeit mini] entry from the point of view of the main protagonist of Final Fantasy XV, Noctis."

As the game starts, Noctis is introduced to a nameless, miniature, long-eared fox with a red crystal-like horn centered on its head. Somehow (again, abstract), it gives Noctis a phone to communicate with the child via text messages and help him discover the path to Noctis’s awakening. On paper, sure it sounds all a bit odd, and it is. But what comes next is pure excitement and joy.

Getting into Platinum Demo, Noctis starts out in a very linear lakeside, collecting glowing yellow crystals shards and stepping on switches here and there. Many switches lie about in all sorts of places within the demo. These switches come with a small hint icon as to what they do. For example: a switch with an umbrella on it makes it rain, a switch with a day/night cycle changes the environment from day to night or vice versa. Other more interesting switches lie scattered all around as well such as the ones that grant magical abilities, weapons, or even change Noctis into a strange monster with a super powerful attack. This brings us to the weapons and balance. The weapons menu is short and simple. D pad allows you to place weapons or magic into each slot, with other weapons and magic hidden in switches throughout the game and accessed through collecting crystal shards. 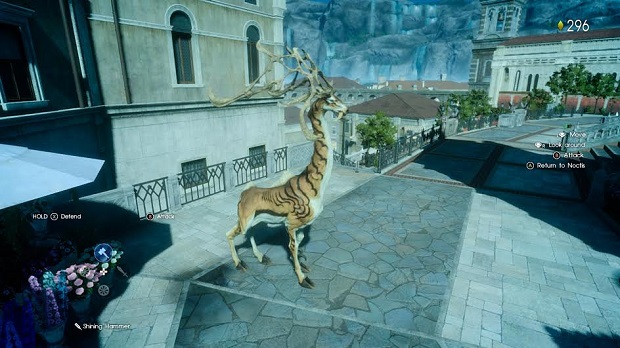 "Other more interesting switches lie scattered all around as well. Ones that grant magical abilities, weapons, or even change Noctis into a strange monster with a super powerful attack!"

Hundreds of crystal shards are scattered throughout the three playable locations within Platinum Demo. These shards are used to access switches that are otherwise locked from access and if Noctis is hit during battle, he will lose some shards upon collecting damage. However, for the first three locations, Noctis cannot die as he has no health bar.

After reaching the end of the lakeside, finding a magnificent Titan, and a majestic flying beast, the little white anima;lguides Noctis to the second area. This place is a massive dining room in which Noctis is a tiny spec in comparison — much like Sora in the Alice in Wonderland level of Kingdom Hearts. Here you’ll find giant toy blocks, playing cards, books, and switches that can turn Noctis into a vehicles to make travel around this enormous level much quicker.

The last area is the Citadel, or what is essentially a small, gated portion of a soring metropolis. Here is where it gets juicy. Noctis will transform into his adult form and actually fight against a boss. Noctis and the boss both have health bars, but again, Noctis cannot die even when his health bar is struck down to zero. 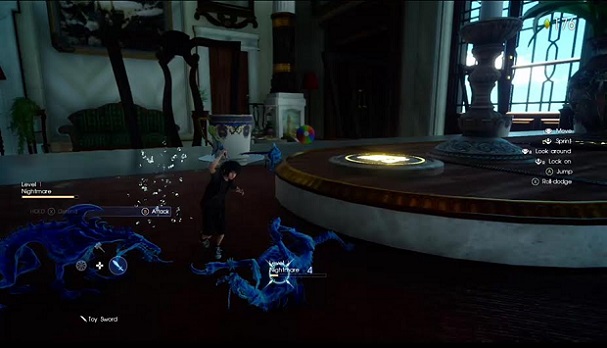 "The attention to detail put into every little aspect including the atmosphere, enemies, environment, weapons, and so much more is fantastic, even beyond what is the norm for a demo."

As mentioned above, Platinum Demo resembles Kingdom Hearts in several ways such as its lighthearted, and often endearing musical numbers, to the translucent blue enemies called Nightmares, to its action RPG control schematics. It’s apparent that Kingdom Hearts is the inspiration of how Platinum Demo and probably the full version of  Final Fantasy XV will play out. And that’s just fine by me, as the controls for Noctis were spot on. Running faster by holding down “B” or Circle Button on their respective controllers, switching weapons with the D pad, dodging with “X” or Square, respectively, everything felt smooth and very reliable.

Noctis’ character model, including his skin, hair, eyes and clothing look so good in this demo. When he fights and runs, he doesn’t just “go,” he works his way into a run, much like you’d see a child do in real life, with a sort of fumble that works its way into a run. The attention to detail put into every little aspect including the atmosphere, enemies, environment, weapons, and so much more is fantastic, even beyond what is the norm for a demo.

When the demo completes, Noctis will “remember” the long-eared fox’s name. This allows you the ability to give it a name: defaulted at “Carbuncle.” Upon naming the fox whatever name you prefer, this action will transfer over to the full version game when it launches in late September and will allow you to use “Carbuncle” as a summon in the game.

For a free demo, Platinum Demo is astounding with so much to discover, learn and play. We at last get a taste of the coming future of this franchise, and so far it feels magical.