‘Not long now. Almost there.’ 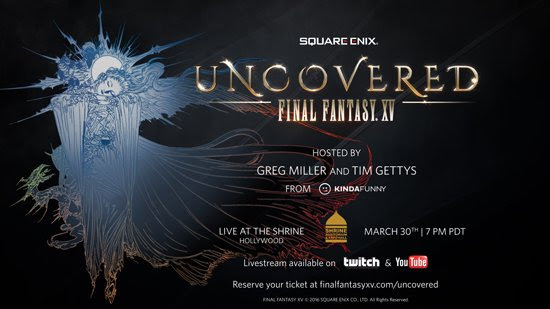 Final Fantasy 15 is, to quote one of the game’s many trailers, ‘almost here.’ We will finally learn when we can play this game, legendary for its decade long development cycle, in March, when its release date will be announced at an event called ‘Final Fantasy 15 Uncovered.’

This event will be held in Los Angeles on March 31 at The Shrine, Hollywood, and it will be hosted by none other than Kinda Funny Games’ Greg Miller. No parallel events will be held in Europe and Japan, but Square Enix has promised that it will be livestreaming the entire thing on YouTube and Twitch, for those who can’t make it to the event themselves, or those who live outside of the US.

Final Fantasy 15 is widely expected to launch later this summer. We know it will have a worldwide launch date, so there is going to be no delay between the Japanese and western launches. The game is due out for the Xbox One and the PlayStation 4.