This would make it the first mainline Final Fantasy game to be rated M.

Final Fantasy 16’s recent reveal trailer caught the attention of millions for a number of reasons. For starters, the announcement of a new mainline Final Fantasy game is an exciting occasion no matter how you cut it, but Final Fantasy 16’s pure fantasy setting – something that fans of the series have been asking for for a while now – makes it even more exciting.

Something else that several people have noted is the dark, mature vibe that the trailer seemed to give off- and it certainly seems like that’s an approach the game is going all in on. In an email recently sent by Square Enix, they revealed that Final Fantasy 16 has been provisionally rated 18 by PEGi, which would translate to an M for Mature rating by the ESRB in North America.

That’s notable because it’s the first time a Final Fantasy game will have that rating since Final Fantasy Type-0 (which was rated M in North America and 16 in Europe), and flat-out the first ever mainline Final Fantasy game with an M rating. Of course, this is a provisional rating for now, and things could still change, but it gives us a pretty good idea of the sort of tone the game is going for.

Final Fantasy 16 is in development for the PS5, and apparently has been for four years now, and will reportedly be out in 2022. The game allegedly has a 1 year exclusivity deal with the PS5. More new details on it will be revealed next year. 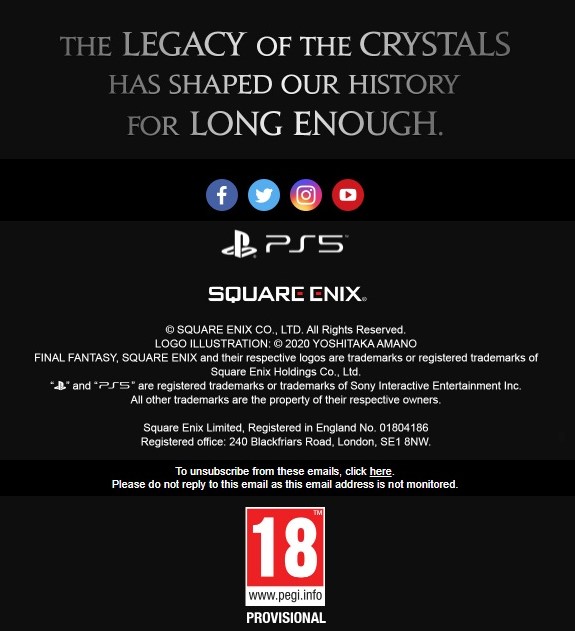