The key details you need to know about Square Enix’s long-awaited remake.

Posted By Shubhankar Parijat | On 16th, Mar. 2020 Under Article, Feature

After years and years (and a few more years) of anticipation, Final Fantasy 7 Remake is almost upon us. The radical reinvention of a role playing classic is without question one of the biggest releases of the year, and as we approach its imminent launch, excitement surrounding the game is continuing to mount. Here, in this feature, we’ll take a look at fourteen crucial bits of info you should know about the game as we count down the days to its long-awaited release.

Whether it’s for commercial reasons or for purely creative ones, but it looks like Square Enix are going to take their sweet time retelling the complete story of Final Fantasy 7. Though the upcoming release is titled Final Fantasy 7 Remake, really, it’s just part 1 of the remake, and will be focusing only on the Midgar section of the original game. Square haven’t yet talked about how many parts there will be in total, or how long a gap will separate each release.

Thankfully, one thing that has been confirmed by FF7 Remake’s developers is that in spite of being episodic games, each instalment will be a full-length Final Fantasy title. Though they haven’t given any specific numbers, based on that statement we can probably expect a main story that’ll last somewhere between 25-40 hours.

Final Fantasy 7 Remake being a full-length FF title is a particularly intriguing prospect. As we’ve mentioned, the game is only going to focus on the opening section of the original which took place in Midgar. In the original, that was about 4-5 hours long, so we’re curious to see how Square stretch that out over a much longer runtime. Though there’s no confirmation of what the cutoff point for the story is going to be, it would make sense for it to end after Cloud, Barret, Tifa, and Aerith’s escape from Midgar after the latter’s rescue from Shinra. 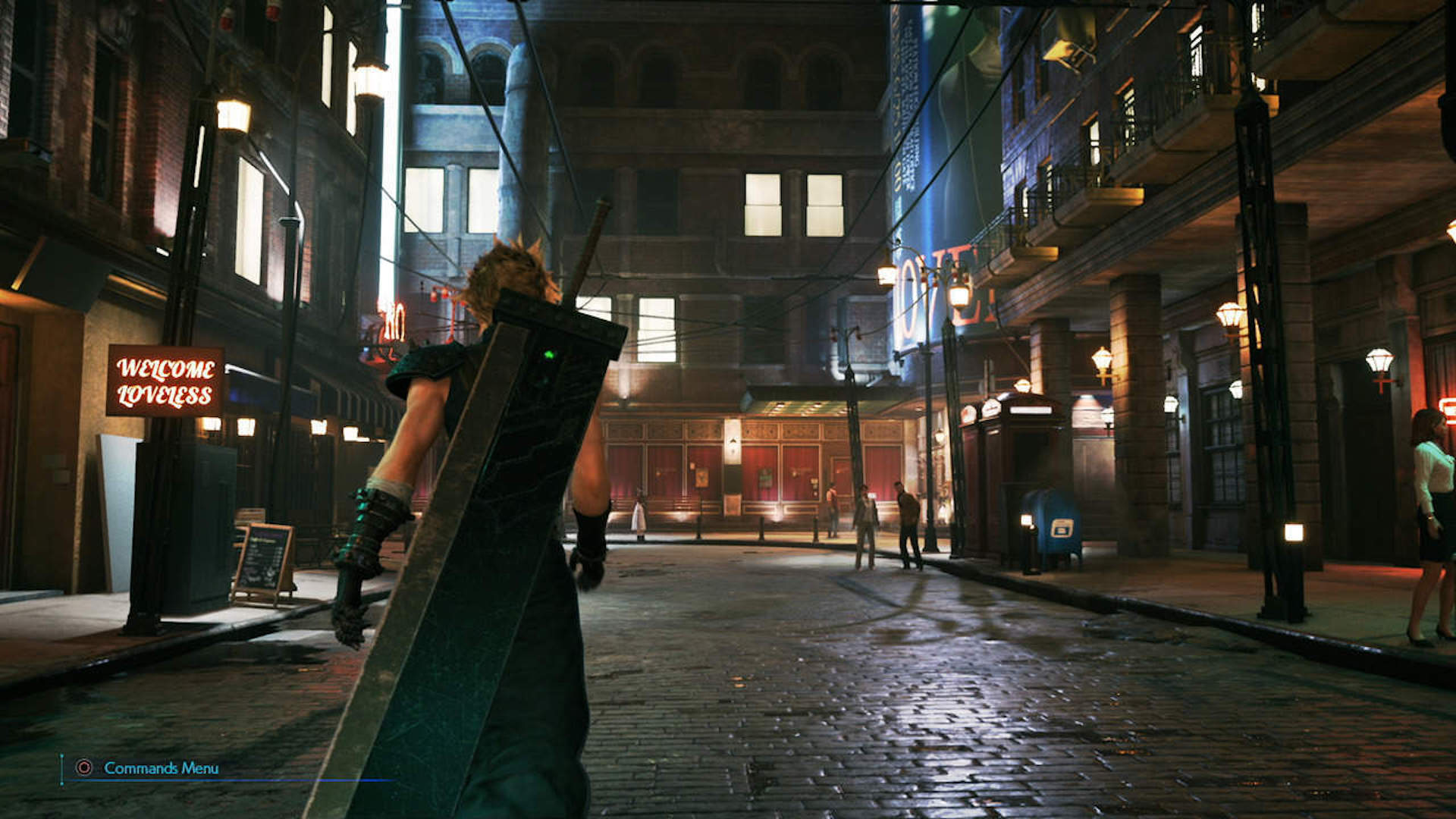 Given that Midgar is the be-all-and-end-all when it comes to the upcoming game’s setting, can we expect it to be much more expanded than it was in the original? Well, yes. Though Square Enix have carefully avoided saying anything too specific – such as whether the game will be open world or linear – they have said that they will be expanding and reimagining locations from the original game, while also adding in entirely new areas. The developers have also confirmed that players will be able to use vehicles to get around at Midgar at certain points- whether that’s referring to actual open world traversal or something along the lines of a fast travel system remains to be seen, but it’s pretty clear that Final Fantasy 7 Remake’s Midgar is going to be much larger and much more fleshed out than it was in the original FF7. 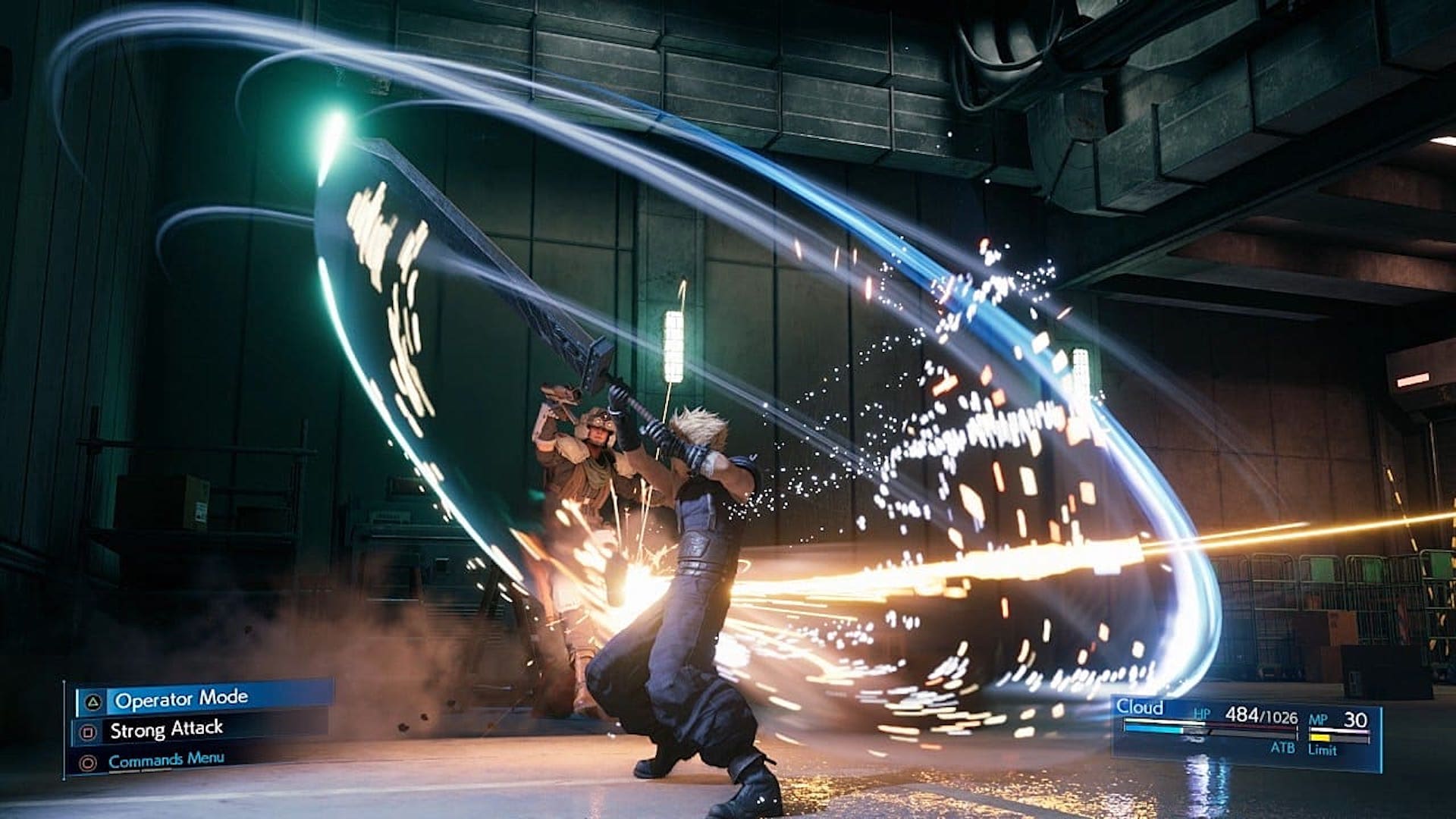 The biggest change FF7 Remake is making is to the combat, which is no longer turn-based, to no one’s surprise. Players attack in real-time, and can pause the action at any time to use special abilities, magic attacks, and items by using up the ATB gauge, while you can also switch the character you’re in control of during combat on the fly. Meanwhile, each character also has a special mode that you can enter by pressing triangle. For Cloud, this comes in the form of Punisher Mode, which sees him moving slower, but dealing more damage and also being able to parry attacks. Meanwhile, for Barret, this takes the form of an overcharged shot from his canon, which then slowly recharges over time (though you can also make it recharge faster by spamming triangle).

Though combat has been overhauled, many elements from the original game are making a return. We’ve already mentioned the ATB gauge, and another returning mechanic is Limit Breaks. As each character takes more damage from enemies, their Limit Gauges continue to fill up. Once completely full, you can perform stronger special attacks known as Limit Breaks. We’ve already seen a few of these in action that fans of the original game will recognize immediately, including Cloud’s Cross Slash, Tifa’s Somersault, and Barret’s Big Shot. 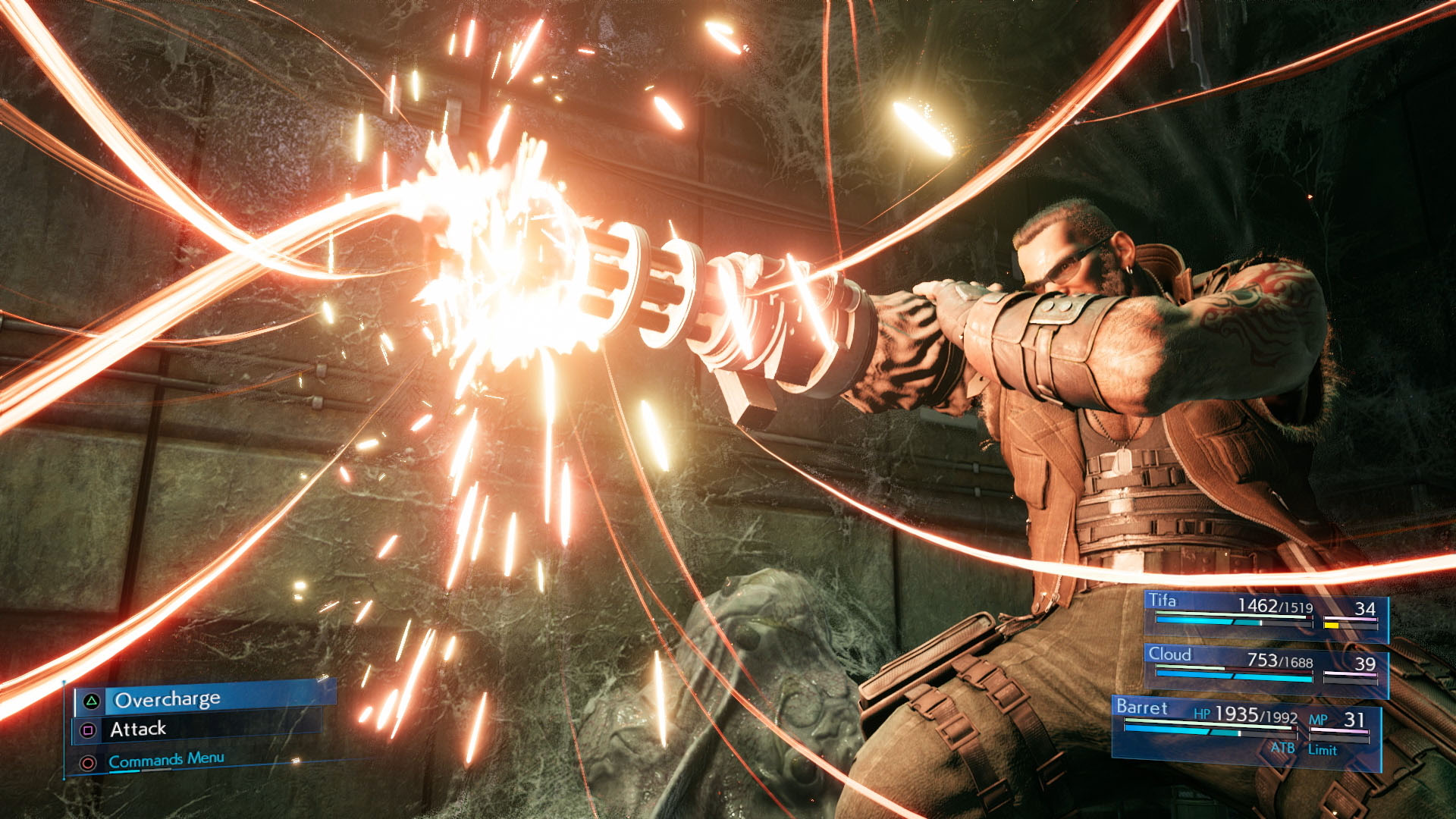 Though abilities that can be used in combat will initially be restricted to specific weapons, the more you use them, the more proficient you will become with those abilities. Once a character maxes out their proficiency with a certain ability, they will learn that ability permanently, thus allowing them to use it with any weapon they wish.

Of course, Summons and magical abilities will also be making a return, and like the original game, these can be used by equipping Materia specific to them to characters. Several Summons and magic abilities have already been shown off, with the latter ranging from elemental attacks to an Assess ability that allows you to, as the name suggests, assess an enemy during combat and learn more about its resistances and weaknesses to get an edge in battle.

For those who’re looking for a less action-oriented combat system and want something that hews more closely to the original game’s command-based battles, Final Fantasy 7 Remake offers the Classic Mode. Though it’s still not technically turn-based, it does strike an interesting middle ground. Characters attacks enemies automatically, which means you just have to wait for the ATB gauge to fill up, similar to the original game, and pause the action every once in a while and use the gauge to use abilities, items, magic, and more.

Final Fantasy 7 Remake will also include several minigames, many of which are ones that fans of the original games will instantly recognize. The weird squats minigame makes a return, while there’s also chin-ups to do and darts to shoot. You can also expect to partake in Chocobo races, arm wrestling, and more.

Final Fantasy 7 told a pretty complex and grand story as it is, but there was a lot more to the universe that it created that was told through Compilation of Final Fantasy 7, a collection of sequel and prequel games (and one animated movie). While you might be hoping to see some of that content making its way into Final Fantasy 7 Remake given how much Square are seemingly expanding its story, the developers have confirmed that none of the Compilation characters will be in the game. Obviously, this is not true for characters like Sephiroth or Zack Fair, who were in the original FF7 as well, but any characters who only appeared in the Compilation entries are going to be kept away from the remake (or the first instalment, at any rate). The original Final Fantasy 7 on the PS1 was a huge game, and came on a total of three discs. And while modern-day Blu-Rays have significantly more capacity than the CDs of old, Final Fantasy 7 Remake is still not going to fit on a single disc- yep, the game’s physical release will take up two Blu-Ray discs. As for the digital release, while Square Enix haven’t yet given an official number for how big the file size will be, reports have pegged it as being in the 100 GB region. 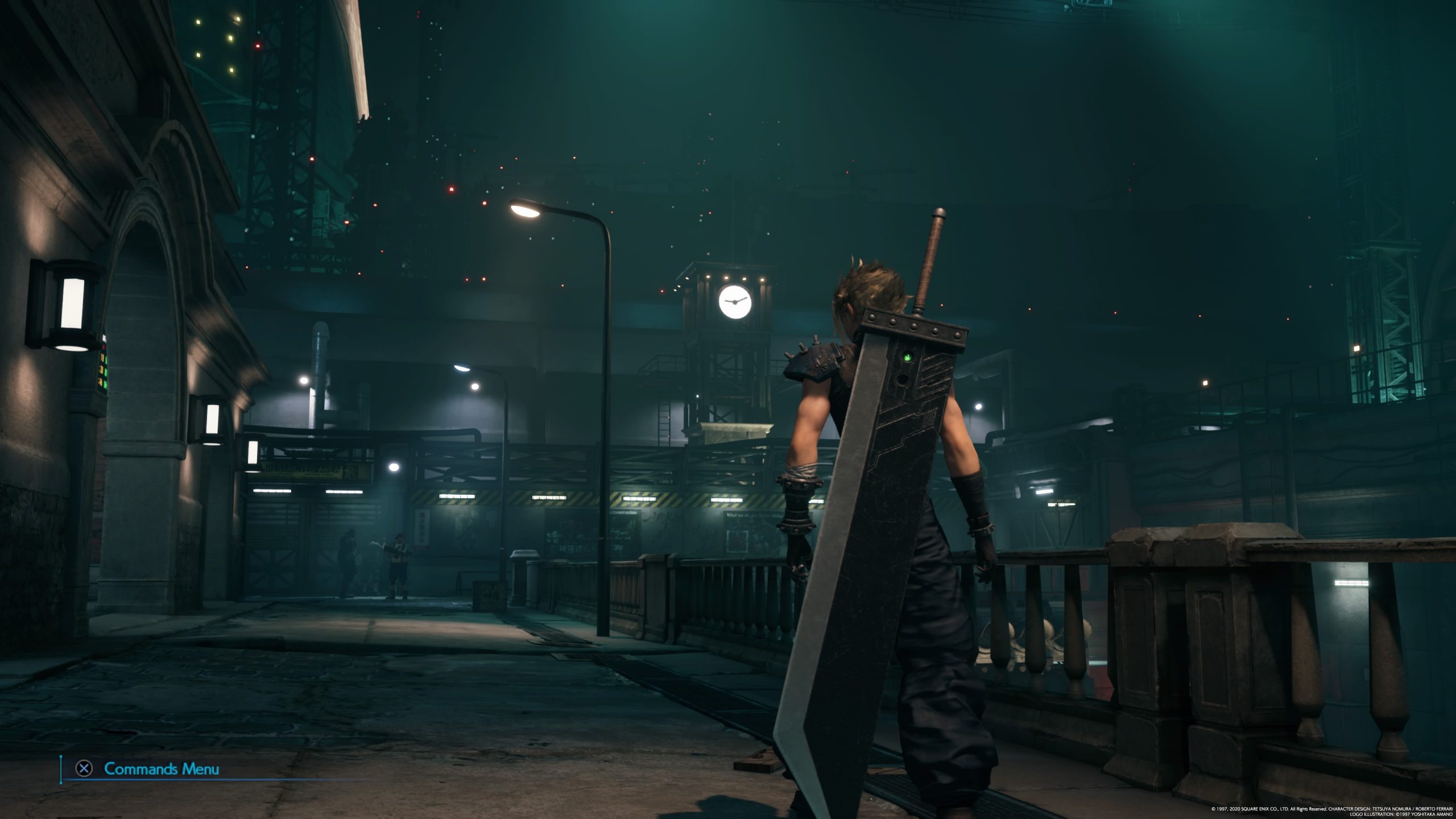 When Final Fantasy 7 Remake was first officially announced at E3 2015, it was confirmed that it would be a timed exclusive for the PS4. The game will remain exclusive to Sony’s console for a full year, and its exclusivity will end on April 10, 2021, exactly a year after its release. While there’s no confirmation yet of what other platforms the game will eventually release on, when its demo was leaked earlier in the year, data-miners discovered evidence of a possible PC release- which seems like a pretty safe bet at any rate.