The crossover mania continues as Square Enix announces a bunch of cross promotion material for Final Fantasy XIV: A Realm Reborn. Fresh off of announcing that Lightning will have access to Cloud Strife’s outfit and Buster Sword (not to mention victory theme) in Lightning Returns: Final Fantasy XIII, Square Enix has now announced that Lightning will make an appearance in A Realm Reborn with an exclusive quest dedicated to her. 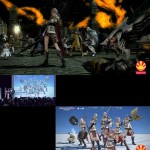 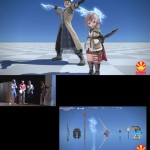 But that’s not all. Players will also be able to use Lightning’s Final Fantasy XIII outfit along with weapons from the game such as her gunblade, Fang’s staff and Serah’s bow. This is only for female players though (thank God), with male players able to access Snow’s trenchcoat from the first installment.

Final Fantasy XIV: A Realm Reborn is currently in the middle of the third stage of its closed beta, wherein PS3 and PC gamers play together. Lightning Returns: Final Fantasy XIII will be available on PS3 and Xbox 360 in February 2014.