She’s full of herself, but is well-meaning.

Nintendo continues the flash teasing of the next installment in their fantasy RPG series, Fire Emblem: Three Houses. While we’ve gotten small reveals of several of the major characters, namely the leaders of the three titular houses, they’ve since moved on to some of the big supporting characters, which we’ve seen with the main protagonist’s father and the leader of the Church that presides over the academy (with potential hints that a clash is coming with them)- and now we have Manuela.

Manuela is a teacher at the academy where the plot of the game primarily takes place. As you can see from the Twitter video below, she’s a bit full of herself, being a former diva whose career peaked at the Mittel Frank Opera Company in the Imperial capital. Despite her boisterous nature, she’s kind hearted and will help the main character navigate their new role in the academy (thanks to Twinfinite for the translation).

Fire Emblem: Three Houses will release July 26 on the Nintendo Switch. You can check out an in-game screenshot and art render for Manuela below. 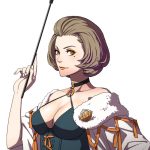 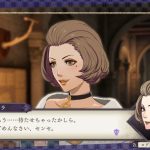