A serious man during a serious time.

Yesterday, we changed pace a little with the marketing for Fire Emblem: Three Houses and got a trailer dedicated to the entirety of the House of the Black Eagles. Today we’re back to highlighting individual members of the game, however, and we get a look at a serious and devoted man in Gilbert.

Gilbert is a knight for the Church of Seiros, the entity that oversees the functions of the academy where the game’s plot takes place. He’s a serious man who doesn’t talk very much, staying very to the point. Because of that it can be rather difficult to know him, but apparently he does enjoy cooking. He’s part of recent spotlight put on key members of the church, all with a focus on how very devote they happen to be, something that could very well come to a head in the game’s plot in some way.

Fire Emblem: Three Houses will release July 26th exclusively on the Switch. You can check out Gilbert’s introduction and character artwork below. 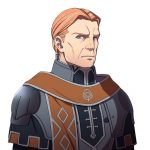 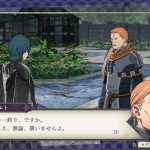