Supposedly, this guy isn’t a villain.

Nintendo continues its brief character teases for Fire Emblem: Three Houses. They’ve shown off the three leaders of the titular houses, Claude, Dimitri, and Edelgard. Now we’re seeing some of the supporting characters, and one from the House of the Black Eagles is Hubert, an attendant to Edelgard during her time at the academy, and a rather shifty-eyed looking fellow.

As you can see from the game’s official Twitter below, Hubert introduces himself to the main character shortly after coming to Garreg Mach Monastery. He is apparently dedicated to his House’s leader, and will remove any obstacles that ultimately stand in her way. Despite that ominous statement, and what can only be described as the most cliché anime villain look of all time, Hubert is not a villain, and Edelgard describes him as a “cool, but honest” person (thanks to Twinfinite for translations). Not sure if I really trust Hubert not to pull the villain card, but we’ll have to see how his part of the multi-faction story plays out. 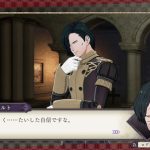 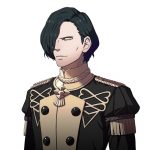