We step away from the students to look at a full fledged Knight.

The last few weeks, the focus on Nintendo’s revealing of the Fire Emblem: Three Houses cast has been on the students of the titular Houses. Today, though, we step back a bit and get a look at someone who isn’t a student, but a full blown Knight of Seiros: Catherine.

Catherine is a graduate of the Garreg Mach Academy and one of the most powerful sword wielders in the game. She uses a legendary sword known as the Raitei, one of the Relics of the Heroes, a group of weapons said to have divine powers (the main protagonist also wields one called Sword of the Heavens). She’s sworn to uphold the Church of Seiros and serve the Archbishop. It feels like there’s a conflict potentially brewing with the church’s strict rule, so it’ll be interesting to see where Catherine’s arc goes (thanks to Twinfinite for translations).

Fire Emblem: Three Houses will release July 26th exclusively on Nintendo Switch. You can check out Catherine’s in-game introduction and artwork below. 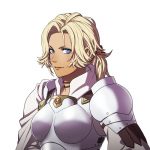 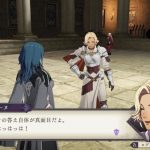