First official FIFA 12 review is in; Games Master awards it 94% 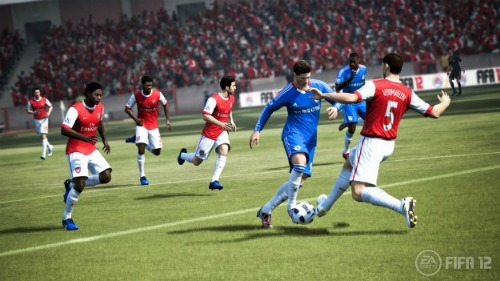 The world’s first official FIFA 12 review is finally in, in time for the game’s September 27th and 30th release in US and Europe respectively. Gaming mag Games Master has given the game a score of 94%, saying that it is the “the freshest and most fearless FIFA in living memory”.

“The new emphasis on precision dribbling makes each encounter a mini game of human chess,” the review says, moving on to praise the new Impact Engine system, saying that all tackles and following animations feel authentic and fresh.

The system ensures “no two collisions are alike”, the review says, and that “players fall as they would in real life, meaning reckless tackles or a mid-air rendezvous such as this carry a high risk of injury.”

The review also praises the new defensive play, acclaiming the new “containment”, saying it turns out to be “far more useful than it first appears” because “it allows you to keep pace with the forward and shepherd them away from danger and towards tactically unfavourable positions.”

The new designs tweaks also go a long way, the review says, and “iron out some of the foibles of defending that have irritated on a yearly basis.”

The review concludes with saying that anybody who has “exhausted FIFA 11 and is thirsty for a new challenge” should definitely buy FIFA 12.

More reviews will definitely start trickling in soon, so stay tuned. We will keep updating you with them. We will be posting our own review soon, too, so keep checking back.

Till then, you can have a look at our mega FIFA 12 interview with EA Sports to get rid of any questions you have about the game and get you even more hyped. A demo for the game will also be released soon.

All leagues, teams and stadiums included in FIFA 12 were recently revealed. The list is pretty impressive. Have a look, here.