The win rates were surprisingly even.

Ubisoft recently held an Alpha for the upcoming title, For Honor. Now that the Alpha is over, the company is divulging information about how people played the game and what characters they most often chose as their hero. When players decided to take part in the Alpha and wanted to go with their favorite warrior, they most often chose the Japanese warrior Orochi.

On the flip side of that, the warrior that was least often chosen as the hero was the conqueror who had just nine percent of players choosing him. The Berzerker came in a close second with just 10 percent popularity. Despite the fact that the Raider was only chosen 16 percent, compared to 30 percent for Orochi, Ubisoft says it was the Raider that was the deadliest warrior.

Check out the full infographic below and then gear up. For Honor releases for the Xbox One, PS4 and PC on February 14, 2017. 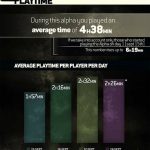 Tagged With: For Honor, pc, ps4, Ubisoft, Xbox Ones