A charming, flawed, and crazy addition to the PlayLink library.

There’s never been a shortage of party games. I grew up with the Mario Party titles on the N64 and the GameCube. After that, everyone wanted to get their rock star on with Guitar Hero and Rock Band. Then came the unstoppable Wii and the equally ubiquitous Wii Sports. Of course, there’s tons of other hidden gems in the genre, too: the overlooked Fusion Frenzy games on the original Xbox, and more recently, the Wii U’s excellent Nintendo Land.

No matter what console you own, there’s no shortage of party games for you to play, which makes Sony’s decision to build a PlayLink game around one something of a combination of a no-brainer and a financial risk. It’s a no-brainer because PlayLink games rely on each player to use their phones to play the game via an app. This means you’ll never have to teach someone the controls to a game, or worry about having enough controllers; pretty much anyone with a semi-modern phone can play. The risk is that, by limiting the controls to swiping, pressing, and tilting, you’ll lose a lot of what makes a party game good – the opportunity for a wide variety of games (which often rely on very different controls), which aside from an overarching theme, is part of a party game’s core appeal. 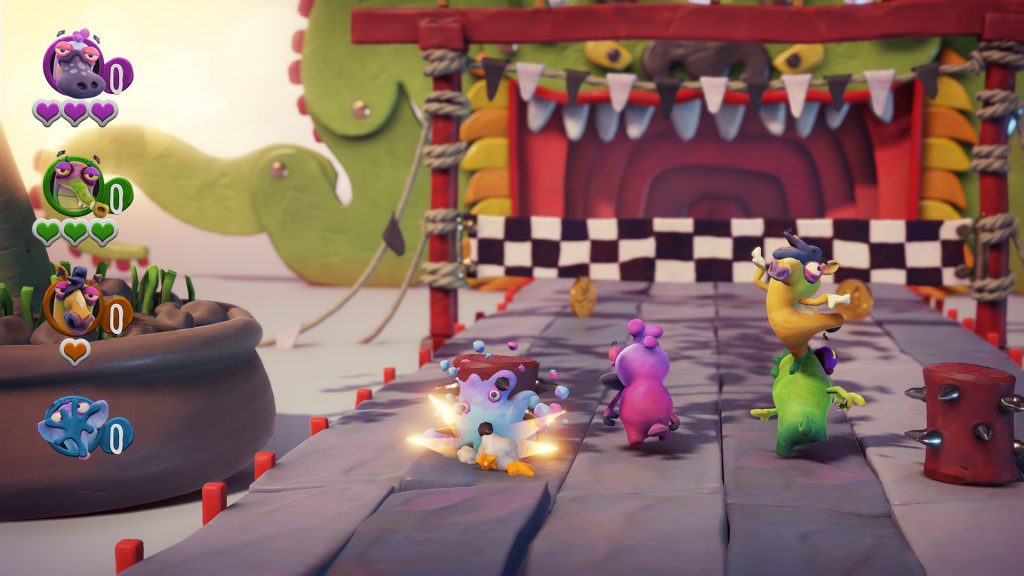 "In Friendless Runner, you’ll navigate an obstacle course that requires you to jump over and avoid other obstacles while knocking your opponents into them or even riding on their heads. The one who has taken the fewest hits at the end wins, but you’ll get points as long as you finish."

If nothing else, Frantics nails its theme. At its core, the game is about a group of Claymation animals that have been roped into a series of mini-games by Fox. Fox is kind of a jerk – he’s essentially a Bond villain, but without a convoluted master plan to monologue about. No, Fox is doing this because it’s fun: he gets to watch his “stupid animal friends” beat each other up and enjoy pilfering their hard-earned money while insulting them (and you) at every turn. What’s not to like?

Once you’ve connected to the game, you’ve got a few choices to make: you can play individual games, create your own series of games, choose a custom list based on game type, or allow Fox to set up a series of random games for you, known as a Fox Party. Each game you win gets you a crown and depending on what your group (or Fox) chooses to do, those crowns are either converted to lives for the Grand Finale or added onto the ones you can buy at a final auction with any coins you collected while playing. The last one standing, or with the most crowns, wins. Obviously, you’ll want to win as many games as you can, and thankfully what’s here is pretty good.

In Friendless Runner, for instance, you’ll navigate an obstacle course that requires you to jump over and avoid other obstacles, while knocking your opponents into them, or even riding on their heads. You can only take three hits, and once you do, you’re out. The one who has taken the fewest hits at the end wins, but you’ll get points as long as you finish, so you’ve got an incentive even if you’re not going to come out on top. 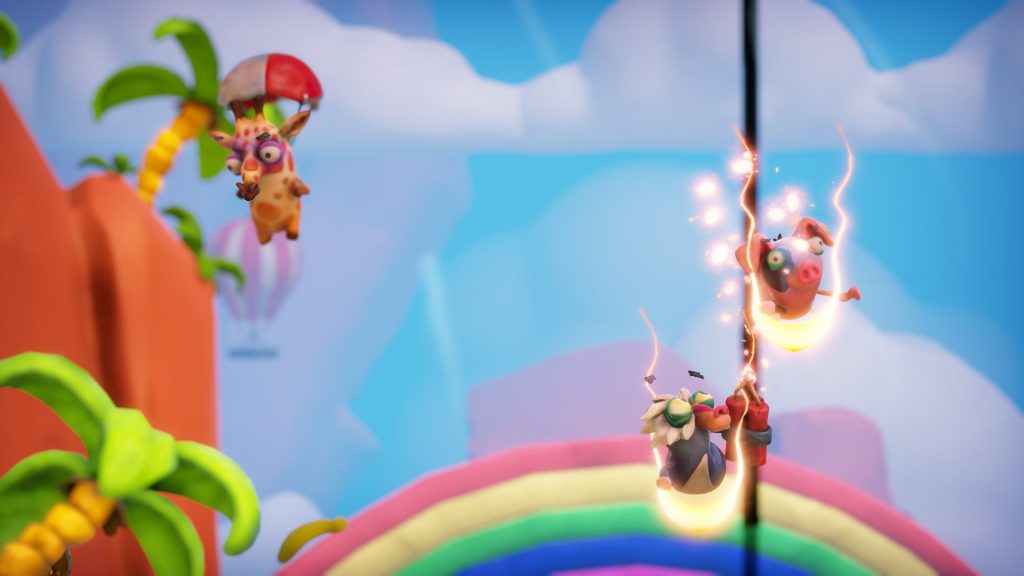 " Fox will switch things up between rounds. The first round of Parachuchu might be played straight, but in the second, Fox will throw dynamite down with you. Naturally, the last person holding it when it goes off is going to have a bad time."

The other games are similar to others you’ve played before. Dough Knights is a jousting game where you try to collect doughnuts on your lance while knocking them off of the lance of other players. You just don’t want to be holding the explosive doughnut at the end. Parachuchu gives you a parachute and throws you off a cliff. The last one to reach the ground wins, prompting a pretty intense game of chicken. Jetpack Nut Job gives you a jet pack and forces you to navigate obstacles in a moving level while aiming for a goal. If you fail to keep up with the level, you lose a life.

Icicle Pickle is a battle to the death atop a frozen mountain that is constantly shrinking, while Hot-Rod Heroes is a racing game where you run a series, modifying your rod after each finish. The kicker is you’re modifying your opponents’ cars, not yours, and you’re making them worse. Chair Riots gives you a springy chair so you can fling yourself at a bulls-eye. Too be successful, though, you’ll have to avoid hitting traps and getting pushed by other players. In certain games, you might even get an opportunity to contribute after you get knocked out by sabotaging another player. All it takes is the push of a button on your phone.

The whole package contains about 15 mini-games, all of which are a pretty good time, and play pretty differently, partly because Fox will switch things up between rounds. The first round of Parachuchu might be played straight, but in the second, Fox will throw dynamite down with you. Naturally, the last person holding it when it goes off is going to have a bad time. Other mini-games feature added challenges or even an auction, where you can bid on items to help you during that round using coins you’ve collected in the various games. These include freeze rays, bomb and trap diffuser kits, double points hats, jet packs, and lances. Even if you don’t win the item you want, you’ll still get something, and activating them is as easy as tapping a button on your phone. Lose a round? Don’t sweat it. Fox gives away bonus coins to the player who does something fun, like spending the most time on another player’s head, holding the bomb the longest, or hitting other players the most. 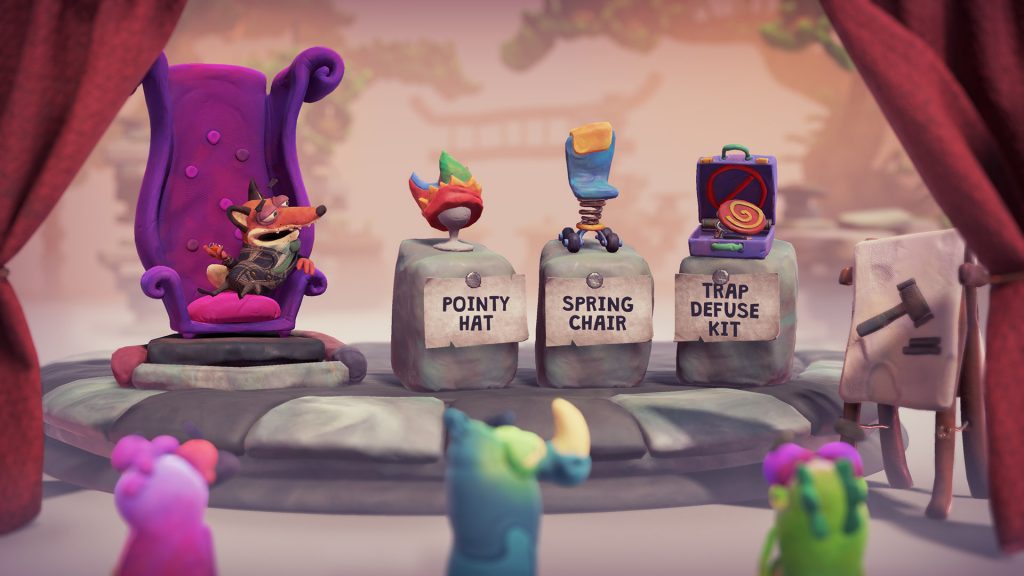 "Other mini-games feature added challenges or even an auction, where you can bid on items to help you during that round using coins you’ve collected in the various games. These include freeze rays, bomb and trap diffuser kits, double points hats, jet packs, and lances."

In certain modes, Fox will even switch it up between mini-games, giving players secret objectives by calling your phone. You might be asked to help another player win a game, which will also get you a crown, or to sabotage a particular player. There’s even mini-games between the different games that have you playing a game of hot potato with a bomb. It’s good stuff all around. There’s also a lot of strategy involved. Do you spend a lot of money on an in-game auction for a particular item, or save them to get the weapon you really want – which are carried over from the mini-games you played on this adventure – at the auction before the Grand Finale or to buy more crowns at the end?

If Frantics has any major issues, it results from the controls. Game that ask you to make simple swiping motions, aim at a target, determine how much charge you want on a meter, or hold down a button, like Friendless Runner and Chair Riots, are the most fun. The ones that suffer most under this system are the ones that require you to tilt your phone to control your character. It’s not that the tilt controls are bad. Quite the opposite. While they’re not as accurate as a good old-fashioned analog stick, I’ve rarely lost because of them.

No, the real issue is how the game asks you to hold your phone. Most game require you to hold your phone out in front of you at an angle, like you’re about to hand it off to someone else while still trying to read a text. For most games, this is fine, but many of the game use tilt controls, which can be uncomfortable after a few games. Tilting one way – in the direction of the thumb on the hand that’s holding your phone – is also much harder than the other because of the way the human wrist operates, which leaves you at a bit of a disadvantage in certain situations. 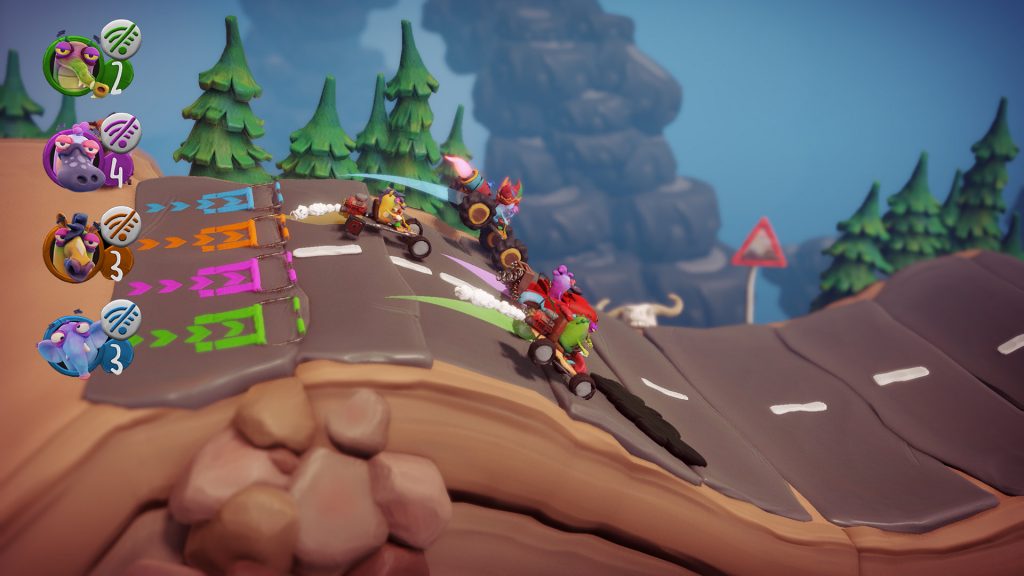 " The real issue is how the game asks you to hold your phone. Most game require you to hold your phone out in front of you at an angle, like you’re about to hand it off to someone else while still trying to read a text. For most games, this is fine, but many of the game use tilt controls, which can be uncomfortable after a few games."

I don’t want to knock Frantics too much for this – I like how Fox sends you messages about who hit you the most in a previous game and give you secret missions via the second screen – but it can cause issues in stuff like Dough Knights and Jet Pack Nut Job, especially if you or your friends are new to those games or want to play Frantics for an extended period of time.

If you can get past that, though, and have a phone that can run it (and yes, some people do have some that can’t), Frantics is a good time, especially if you have some friends to play it with. It’s a charming game, and Fox’s quippy brand of mischief manages to both keep things interesting and funny. Fox even gives out cosmetic rewards – sunglasses, ten gallon hats, etc – to the winner of a long series, so you customize your chosen animal avatar. And I have to tell you, my platypus was lookin’ pretty good after a few rounds.

Frantics falls a little short of being the truly great title that is going to make PlayLink take off, but it is a good party game that feels different enough from everything else out there to warrant a look. I just wish you had that option to play it with a controller. You know, for that one friend who’s still rocking a flip phone. They deserve a chance to play, too.

Fun art style and charming characters. Fox is a delightful jerk. Lots of mini-games to play and lots of ways to play them. Makes good use of the phone.

The ready position can make using the tilt controls uncomfortable. Having the option to use a controller would be nice.

Final Verdict:
GOOD
Frantics isn't the killer app PlayLink needs, but a charming art style, fun characters, good use of the phone-based controls, and a diverse selection of quality mini-games good make it a good party game.
A copy of this game was provided by Developer/Publisher/Distributor/PR Agency for review purposes. Click here to know more about our Reviews Policy.